Interview with Tudan following the cancellation of the 1* tournament

As I sneak through the fields of Soylent Green
I see the Legendary Heroes are hungry and mean
While I once had a use, I am now a recluse
And taste great in a tortilla with beans.

"I think, if you were to ask me, it would have given me purpose. For sure. Put me in an arena to fight my fellow clones in an ultimate death match, I don’t care. Anything to extend the life expectancy, amirite? Sure, Sharan gets all the street cred, but that’s real cream-of-the-crop-from-the-bottom-of-the-barrel crap. She does what she can for as long as she’s able. But, in the end (like the rest of us) she ends up in some such chop-suey, grated over some spaghetti or blended in one of Boldtusk’s signature smoothies. Don’t get me wrong, I mean I think everyone’ gotta eat. It was great for ME to get a meal, for once, rather than just BEING a meal. Then we heard of the tournaments and we felt appreciated for more than our nutritional value. Then, like some sort of miracle, some were even awarded extra abilities that others didn’t have. For a brief period of time… we had hope.

Now… I guess my best chance at glory is to end up in Puss-n-Boots litterbox."

While appreciative of Tudan’s dark sense of humor, this reporter is grateful that cows and chickens aren’t quite so insightful.

cows and chickens aren’t quite so insightful. 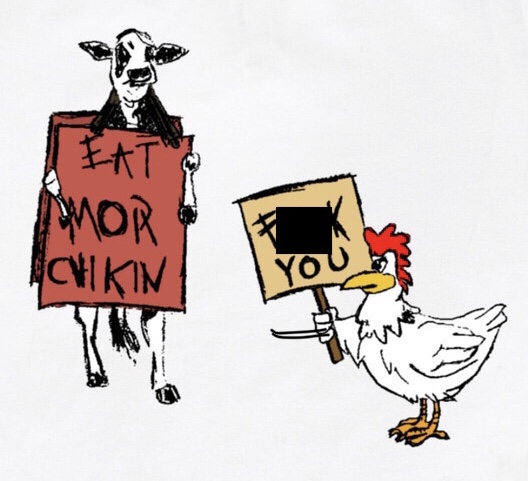 This is GOLDEN! I laughed all the way!

“No way, I’m glad they’re canceled. It allows me to get back to my knitting. My life is short enough, would rather spend it creating masterwork sweaters.” –Fletcher

“Your sweaters chafe my nipples, Fletcher, you suck” – Tarlak