I understand your opinion which helps break down if the hero is viable for ascension mats.
I started leveling mine to 3-70 so I can play and test around.
I believe many players have given an opinion that the hero is now more usable but the minions needed to be more beefier so that the dodge could make a valuable asset to the hero special. I also think some other players have also stated that Inari attack stats are way better than Kadilen in contrast to defense stats so maybe depending on the emblem route, you may want to see in what type of playstyle she is best suited. I believe if Inari mana generation were changed to fast probably most player base would agree as an alternative for Kadilen Costume.
With costumes being added to S2 heroes it is possible it can also happen to Inari.

Welcome to the forum and best wishes in your game!

With costumes being added to S2 heroes it is possible it can also happen to Inari.

But for costume you will need to summon again, and this it’s not buf but new hero, and with this low odds Its almost impossible to get tis hero again.

Personally, since the buff I never took Inari from my mono yellow offense, and she’s also in my defense (though I didn’t reset the emblems to move them from sword to shield). I really enjoy using her.

Ofc, C Kadilen is still superior - speed and overall beefiness making it much harder to take her down before she fires (and once she fires game turns into RNG nightmare). But that’s C Kadilen’s fault, not Inari’s. Inari really feels like balanced and reliable hero now. SG messed up by making Russell mediocre - it was their best chance at countering C Kadilen without destroying Inari that much. He was common enough to threaten Kadilen reliably - but for SG commonness of a hero is best reason to make it a trash apparently. I am worried whatever they’ll do to make players stop using C Kadilen will backfire on Inari a lot. Unless they decide to buff Russell, to at least make him have dispell.

Russel is no option because not everyone have one.

Make inari a bit more tanky. Let her summon minions on attack and after dodge and make her minions a bit better. They die to fast.

Even with that buff inari is weaker than kadilen because fast mana but a good option.

She’s working just fine for me

Everyone dodged both Elizabeth and Uraeus 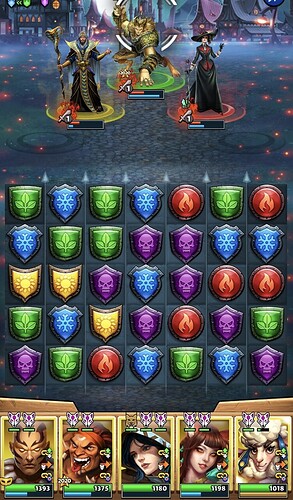 I think some people overlook the fact that she is a Rogue class and can evade. Going against cKadilen, I can render her useless with Malosi. Against Inari, there is a chance she will evade and still cast her special. Is that a worthwhile tradeoff compared to cKadilen speed/stats? Maybe, but I bet people who try to hit Inari before she fires and miss would argue that it is.

Rogue evasion actually only avoids the damage component of a special. The effects still apply i.e. Frigg can dodge Alfrike’s cube, but the mindless attack still affects her

Ah, right I forgot about that. However, she can still avoid that sniper hit that will kill before she fires.

Is this a kind of joke ?
Inari needs a buff to be somehow even to kadilen costume and what do thry do ?
Releasing a hotm thats again better than inari…
Fast mana little less dodge but + hp and no useless minions and good against alfrike…

Do they even play the game ?
Now 2 heros are still better than inari.
Wtf is wrong with the devs.

I did stop spending a while ago and when this goes on i will quit.

More and more op heros are released and season 1 and 2 fall to far Behind.

Make inari more tanky and minions more usefull.
They dont survive one hit…
Or change mana speed to fast too. Do sonething !!

And stop putt everything behind a ■■■■ paywall. No shitt costume

Something has to be done. Balance is out of control !!

didnt she get bump in stats recently?

I believe she was buffed to do direct damage to all, don’t think her stats changed but I could be wrong!

V43 update:
Inari: Added Direct Damage of 180% to all enemies

Indeed, only direct damage was added - no stat buff

still when I compare he vs hanitra, somehow hanitra in any teams works beter. after first cast hanitra is very fast…

Did you experiment with them both? I am not so happy with Hanitra at 3.70, so I postponed maxing her.

I use both interchangeably. Hanitra is pretty okish. Inari is way too good.
One, Inari hits, this makes her useful when cleaning up stragglers.
Two, Inari dodge is more reliable. Higher rate and her minion is so useful for me with the mana boost especially with lack of tiles.
Hanitra forces me to take an additional healer as her dodge works way less to my liking. like 1 in 5 hits is way less for raids where most defense is loaded to kill you in 3 moves these days.

thanks for sharing - as someone who has Inari but not Hanitra, this makes me very happy

I’ve just levelled them both to 3/70 to consider which to do first - I’ve taken them both on raids with cKhagan (also 3/70), Toxicandra, Lepus and either Xman or Seshat (depending on the opposition) and the dodge makes such a difference - Khagan survives more than I thought.

My thoughts align with @drdare

Overall I prefer Inari. I can’t wait to get my mana troop to 23 (20 at the mo) to shave that extra tile off. I get more excited about taking her on a raid too!

On a related note, I’ve seen several Inari’s on war defences and they have not been OSK’d.

They’ll both get mats eventually but I think Inari gets them first.