I keep getting an ad for a game that apparently involves winning girls that you can do sexual things to. I occasionally play this game with my 4 year old daughter but I don’t need to do that to find this ad disconcerting and fowl at best. Here is a screen shot of the ad. The video is sexual in nature. 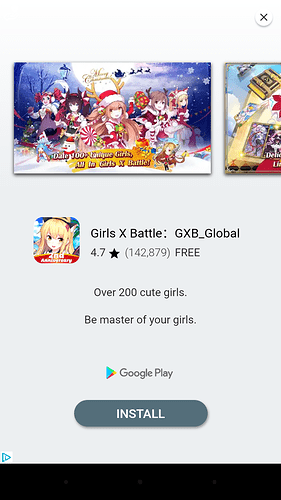 You should contact support directly through the game.
@Petri - could you please look into this? I find this very disturbing.

I did. I just want to reach out here too.

Oh I saw that add as well. I’d say the label innuendo fits this, rather than actually sexual in nature. But inappropriate enough for a 4 years old indeed. I did raise an eyebrow with this one.

Goodness “be master of your girls”. That’s actually sexism. Yikes.

Is this when watching the adds for rewards?

I think those are based on Google store / Apple store and not sure if SG has any influence on what you may get to see.
Non the less it is highly inappropriate.

Yes, it’s gross and it’s an epidemic on various platforms. Steam for one has been inundated by this type of stuff so clearly there is enough of a market for it, and people will rabidly defend its presence there

I read a number of articles today about Google allowing such ads (and worse. Worse? Yes, worse!)

I don’t know if SG can opt out…based on the articles, I think not.

@SamwiseTheBrave @Bertus
((((Just leaving opinion and Infomation.))))
((((Do not reply and will not reply. just letting you know.))))

I agree on it being not appropriate for young children but ads will always find their way to anyone like Bus Ads what am I gonna do stop the bus and rip off the Ad???.

The only thing I can advise SGG to do is add a ads switch mode to let the ads be divided into kid and adult however they work it out with the ad agency. not to support it but as the great Advertisers say SEXy sells. if you want things to succeed thing have to look attractive. not supporting that game in general but many games play to different genres of many different people. and there are games out there that are to opposite gender of this you’ll rarely find thousands of them but they are out there as they play to the i forget but i think it’s called the boy/girl harem collect games.

and another option if SGG can’t get to making a ad protection on top of all the other updates and events they planning to implement ;

If I’m not mistaken, the game has age restrictions so the child shouldn’t be playing the game in the first place ¯_(ツ)_/¯

I have young children and try to keep them away from objectifying imagery.

Without judging, as I enjoy the game and imagery too, I think it’s very poignant that on the same day as this debate, there is also a popular thread on which heroes are most attractive

If you did a commercial for E&P with Athena, Zeline and Natalya would it look much better?

I think Girls X Battle looks more explotative but @Resol is right s e x sells and it’s hard to find any media product that doesn’t use that to attract attention.

Bam hit the nail on the head. I congratulate you. I missed that too as it is morning here for me currently.

lol i was looking around the forum for a Weinstein. i miss read lol. a better way to word is " after the H.Weinstein debacle of accusations and charges.

there is a line and H.Weinstein crossed it. “Q”

Isn’t it also the context/implied intent?

We have impractically clad women in this game, but sticking female characters in skimpy metal bikinis and stilettos is so generic by now I don’t even roll my eyes anymore.

But the game the OP referenced was about collecting women for another purpose.

Yes, absolutely it’s a sliding scale… and you say you’re desensitized to metal bikinis but 10 years ago that was probably a bit more taboo.

I do agree that there is some difference in the role the characters play - our male and female characters have parity and the story is told by Richard and Elena.

But I think there is still physical objectification in both e&p and girls X Battle and on some level, to some people, this reinforces explotative attitudes towards women.

Like I said, I’m not judging, I enjoy this game and it’s imagery.

I too enjoy the things of this game. it’s all about market and ads as op states the ad that started this. which after this discussion and opinions i wonder what are the statistics of event and hotm is the most revenue for SGG like which ones made them more money out of them.

Heroes regular looking heroes with great stats and skills
: versus :
Heroes that are attractive/good looking with great skills and stats

That would be interesting. Certainly the sand heroes got pretty negative feedback.

I bet they did especially for the beta testers saying they felt there was just a copy and paste of the sand chess heroes. only after they suggest names and names for the skills then they looked abit unique now lol

certainly the ad shown girls x battle is bad. but think about what other ads they didnt show u. go to playstore and search keywords like boyfriend boy girlfriend girl and other things

Still, in a few years I’m sure it will be downloaded directly into your brain, and then we’ll be nostalgic for the days when you could switch your phone off and walk away!

At the light of something (

) I must edit that post.
I don’t see nothing wrong at the pic you posted before… just like Mickey