So I just finished Kunchen and need advice on what You guys and gals would set up as a defense. I would of said Ladies and Gentlemen but “gentlemen” would have eliminated to many good players.

Thanks in advance for the help. 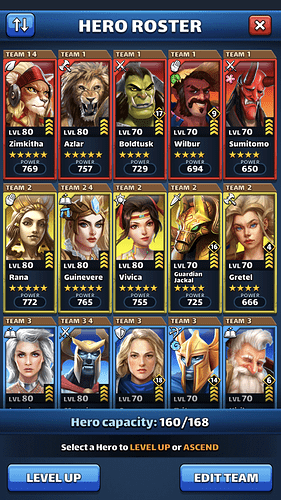 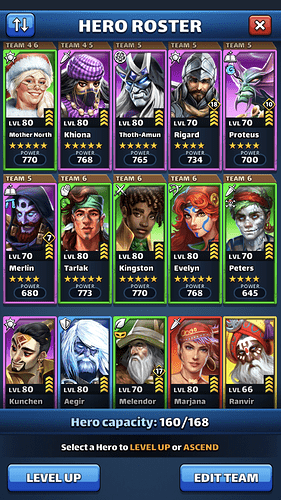 On the one hand, Rana is average and should be a flank, not a wing. On the other hand, if Magni is in the corner, one fewer hero would be protected by his defence buff.

Mother North, Zim, Kunchen, Rana, Magni. You lose a little with Magni on the wing since he can only buff defense for two from there, but I think you are better off with Rana next to the purple tank, especially since she is only average speed.

Alternatively, if you need a yellow tank you could go Mother North, Zim, Guin, Khiona, Magni. I like the former option more, but you don’t have to split emblems between anybody with the second.

I dunno there’s almost too many to consider

Would MN-Kunchen-Guin-Thoth-Wilbur be any good? It’s an extremely passive setup but I’d reroll

Definitely kind of strange to have a problem picking a tank.
I have lots of healing but also need some fire power.

Funny how certain players get certain heroes but miss out on a few that would complete things perfectly.
I am surely not complaining.
But my situation definitely is perplexing.

I do like the fire power in this line up
but worry a little bit about the lack of healing.
Thanks for your input though.

Thanks for your input.
I kind of feel like no matter what I do I’m leaving to good of a hero out of the mix.
I’m not really concerned about losing cups because I can get them back ,so I might just have to experiment and see which defense seems to hold the best.
For war we run either a dark tank flanked by holy or vice a versa so that will be a little easier.
Some might say that leveling Kunchen was overkill but it will be nice to have the extra healers for war.