How to avoid future Nerfs

Please if you find a raid defence team which performs well and then you see other people doing the same combination, simply remove your raid team immediately and without further trials.

Alternatively if you want to get nerfed then put your super defence team same as all others until it saturates the top 100, and you are sure to get your most valuable players kicked out of the VIP lounge.

Players should have learned the patterns before now, it doesn’t matter that you put a different raid formation to wars, it’s the heroes that get nerfed not the formation.

i dont think everyone is willing to compromise like that.
players spend money to get a hero, they may not easily let it go because someone else has it on their def team
“why should i sacrifice my team while they get to keep the strong def?”
greed may play a key factor in this 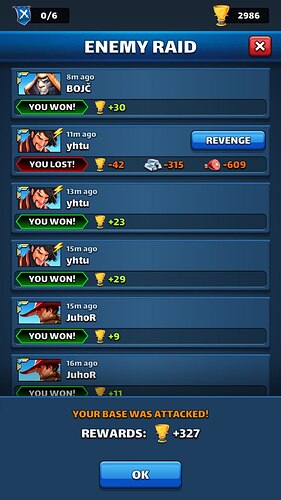 They accumulate the win-loss ratio per hero and then decide whether any “balancing” is required.

SGG “balancing” is tied into the “game economy” too.

SGG would like players to continue to summon new heroes for their roster, and not be fully happy with a particular hero, and stay with that hero.

That’s also why Telluria was nerfed. Players, who received him, was so happy with her, especially if they can pair her with Gravy and Vela. They kinda took a break from trying for newer tanks introduced by SGG. It was probably temporal but SGG got worried.

Yup. Good point there. That’s why Telluria was nerfed to oblivion cos enough players continued to hang on to their Telluria, after the first nerf.

I can’t say that it’s because Telluria was still useful.

SGG assumed that affected parties could just drop Telluria after the first nerf, and rejig their defence teams just like that. Well, the top tier could. Not the mid tier and definitely not the low tier. Hence, the second round and then the third round. Till SGG was satisfied that the majority of player base had obeyed their decree.

Ferant is now Round 1 nerf. If majority of player base does not heed SGG’s decree, Round 2 will happen.

Guin was the top tank prior to Telluria. Players had a year plus to learn how to defeat her. Dumping tiles into Guin on a bad board worked well. Not so much with Tell. There were also multiple Guin counter heroes released (Kage, Seshat, Proteus).

Instead of allowing a natural cycle of a learning curve along with releasing counters over time (Gormek, Kelile and Marj costumes had not been released at that time and should have been put forth as ways to counter Tell), SGG whipped out the nerph hammer…one day after the Atlantis gate for Gravemaker closed.

For some of us, challenging defenses were welcome.

SGG fails at testing heroes hence the need for constant nerphs. They greatly rely on releasing a hero then waiting for the backlash.

trying to herd the masses will only lead to more and more heroes being nerfed.
not everyone is willing to give up on a hero unless it is utterly useless, then it will be mass dropped by everyone and will sit in the back burner of all rosters.

but that will only shed the light on another hero, which will be nerfed as well and so on and so forth
its a cycle the way i see it

I support buffing heroes. When Marge dropped, the only thing she would dodge was tonics. The buff made her more useful and I ended up maxing one.
Players have spent time and money to get a hero; nerphing is like theft.

I have all second tier heroes on my raid defense. It is not worth the risk of over saturation and subsequent nerfing.

No kidding. The money making scheme should be to bring out shiny new toys to defeat the current golden child everyone is running, not to bait and switch their clientele. Nerfing should be a last resort when you’ve truly botched the beta testing, not so routine its part of a balance schedule that puts people on edge about enjoying the heroes they managed to be lucky enough to pull and put further money into leveling them to the point of usefulness.

When he is the dominant tank in wars in top 100 matchups… And i use a mono ice against him filled with limit broken and emblemed heroes… And he doesn’t die… And it isn’t like it was close… He was broken to begin with.

I don’t want him to get the telluria treatment… But damn… For a 4*, someone should have sounded the alarm.

Thanks for the replies. Seems most get the point i was making.
Let’s try to avoid SG from nerfing anymore more of our valued heroes, we keep sticking our heads above the parapet and sure enough we get our heads blown off.
We have seen the pattern too many times now, SG have made it clear they Nerf when the top 100 starts to all look the same.

since yesterday i saw a certain hero creep into at least 20 of the top 100 defence…we are heading towards another nerf.

I’m waiting for the other shoe to drop on one or more of these, given this logic.

Frigg has been nerfed. In 2021. Together with Odin. It’s unlikely that she will nerfed further by now.

Xynolphod is the most likely candidate but then he’s a 5*, and pay-walled. I doubt that SGG will nerf him anytime soon. He’s so profitable.

I suppose, by the logic here warning about further rounds of Ferant nerfs if he continues to used so prevalently, that I would expect that Frigg is also in danger if she is still used so much even post-nerf.

Xnolphod is… exactly as paywalled as Hannah, Elizabeth, and Morel, given that they all come from the same portal (and that even F2P players have a ghost of a chance by using Underwild coins)?

Both Frigg n Odin are not tanks. Flanks n wings.

Tanks stand a higher rush of being nerfed.

The nice thing about Mok-Arr was that he came with inherent immunity to nerphing.

Jade did too. It’s her passive skill! LOL