Covenant summons have trainers in the bonus chests. Not sure how to Value them, but those chests will probably be maxed out also.

I do not know exactly how they did it, but:

You can store (hoard) feeder troops, especially trainer troops. To get that many cyclops troops they had to use some 200 ETT, means a lot of additional feeder troops.

Endgame players can hoard masses of food crates, free and/or from offer bundles, and you can stack a lot of food in AL and TC10-20.
With free builders and an advanced house you can destroy recruits to get masses of food back.
In AL you can stack 3 queues with 100 transmutations each, if you empty the queues, you get a lot of ham back too.
Mercing of 1*-3* titans can also be helpful. Using a few dozens of titan flasks, every flag kills one baby titan and gives you some 100k ham.

And the last resort, of course, creditcard

They certainly did that - they planned ahead, they collected food in warehouses and TC 20, they used up all the flags, they did all the quests, the troops collected throughout the last year. That’s certainly how they got it

so let’s just estimate you can run Phoenix VIP twice per month, so that’s 6 of each. That’s a good amount of troop XP per month that can go into any color.

That he had enough trainers and crates to complete an entire Troop. Of 163,800 xp.
That’s 1 down.
No way trainers are going to account for more than 1.

Those three would be another 60M ham
(roughly)

Alliance member of mine currently has this in stock 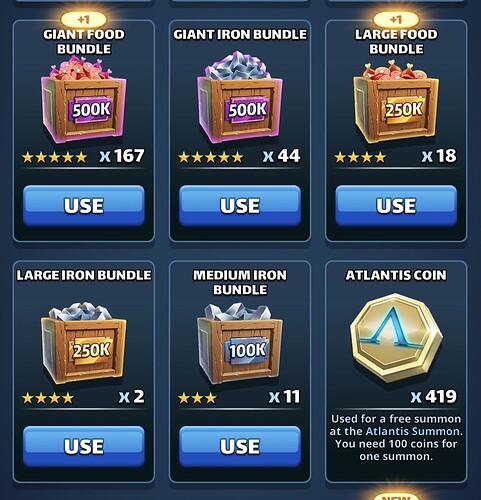 I can’t tell if that’s impressive
Or sad

It mostly shows you can burn 90 mill of food on troops without needing to use gems on food.

That greatly lowers the calculated costs for the troops.

I have not seen many who regularly use all the new hero content also have massive stock piles of ham crates at the same time. As the continued and hurried push to maintain Departed’s meta is a ham burning experience via the heroes alone.

But that’s not to say such a thing doesn’t exist.

Been a while since I sampled the top 10

I mean, the world have so much to offer, why a sitthy, obscure, time consuming cell phone app?

I know right?! It’s like they don’t even know the meaning of the word wine

I have a math problem for that too.
How fast can you click through those coins?

Because there is a second nature troop.
And the troops don’t cross feed.
This means there is enough summons to do all elements at 2 each. Maybe dark is a little less, maybe fire will be closer to 3.
But the average… 2 each!

Now back to the original math. 278 pulls to get enough for 1 troop. (If they are all the same color). 2,780 pulls to get enough for 10 of them… which is what he has. If he burns though 1 coin in 1 second, he could have enough for the second green in 46 minutes.
I don’t think you can. I think it’s more like 2 seconds maybe 3, along with some miss-tapping. In which case…times up!

The pic was taken 2 hours after release?
And they would still need to be leveled!

In such short order it makes me wonder if ETT’s were used at all.

The trainers math doesn’t cover maxing a single troop. But yeah, go ahead and take one green off the table with all the crates, trainers and ETT’s.

You still have to summon enough for 9 more
And level 3 more.
In 2 hours.

I don’t know if I’m impressed by the amount of money that was obviously spent or…
The amount of feverish tapping that took place for 2 straight hours!

I think the latter blows my mind the most.
Folks spending thousands is nothing new.
My hats off to him, he certainly has accomplished some entertainment for us!
This is just what I needed whilst passing a stone. I’m grateful

I believe @Mr.Spock has a video about cost of troop leveling. If I do not remember wrong his estimate was around $2300.

There’s another point for considering. Top players have their troops leveled for a long time. So they can accumulate a lot of feeders. And also they spend for some resources

I used up 131 ETTs for the Styx Troop portal.
Out of 131 ETTs, about 20% came with offers. Rest are free, hoarded since September 2021, after I secured my rainbow set of magic troops.

I am on my own island. Comparatively lower scale game play and activity level. If I can hoard 100 ETTs (free) within 1 year, I am sure that a top tier player with a much busier game play , can amass 200 free ETTs.

Now, with my 131 ETTs… I secured the following Styx troops:

With an additional 69 tries, I should be able to get that “missing” 2nd yellow Cyclope.

Analysis of my 131 troop summons :

I have an answer…

This is a part of the solution, food crates. 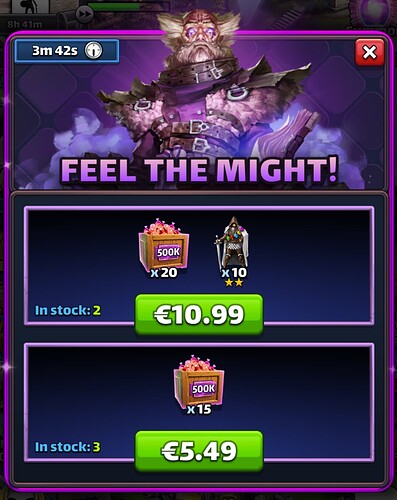 maybe the owner of the account is an undercover E&P staff among us with a super account that can directly access all heroes, emblems, LB and high level troops…
who knows the truth other than the account owner.

My two cents : this player has maxed one green troop mostly with trainers, and one full set with troop pulls. Meaning that he maxed 6 troops total, not 10 as I read somewhere…

Roughly that, if not purchasing any ham refills

not 10 as I read somewhere…

You talk about maxing troops.
He max’d 4. The 10 you reference is not considered max’d.

10 troops (or 2 sets) is the amount of material he would have to have from the RnG portal (which randomly deliver for all 5 elements).
in order to fully level 2 natures as he has done.

This means there is enough summons to do all elements at 2 each. Maybe dark is a little less, maybe fire will be closer to 3.
But the average… 2 each!