GIVE A LOOK AT THIS HERO, WHAT DO YOU THINK?

Green Type Hero
Hypnos, God of the peaceful dream
Attack 750
Defense 750
Health 1500
Special Attack: Sweet dreams
Type: Fast Charge
Special attack:
*Caster deals 333% damage to the target.
*Target is hypnotised and his special serves only the caster once per special attack.
*When target whakes up he gets 30% damage, mana recovery and shield.

I do not understand the special attack. What does it mean „the special serves the caster“ what is mana recovery in detail and what is shield?

Means that the special attack of the target when is charged, it is for use in your team, against the enemy team.

When he shoots the special he wakes up and as it gets angry and has this boost.

Sounds funny but a little overpowered ;D but it depends on the boost he is getting also I think.

Yes it has to be a funny and nice hero. You can fix parameters, its similar to Merlin but instead of doing a casual attack he does his own attack. Thats all 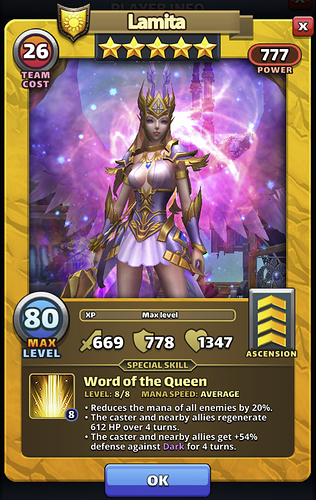