I’m back with some more thoughts about Hohenwerf. Mine is now 4/60 and counting.

This time I want to compare him with Zocc.

So first obvious difference is mana speed, so Hohenwerf gets charged much faster, but this can be disadvantageous sometimes, if you charge him before enemy is charged.

But Zocc’s debuff can be cleansed by a regular cleanse. Though most cleansers are also healers, so they can actually destroy the fiend too.

From the experience, I can say that Hohenwerf in a red mono team (and on raid defense) acts more like a sniper, but in rainbow or 3-2 teams raid attacks his primary ability is the Mindless Attack. So Hohenwerf is more versatile than Zocc, due to faster mana and better damage. 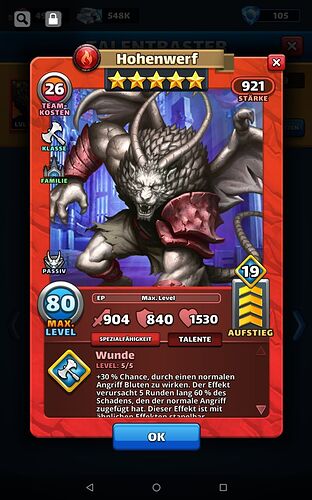 Another hero that has great skills but comes at a great trade off. The fact you only hit one and won’t confirm kill. In a raid/war, usually it’s not 1 hero that can kill you but a combined 2 or 3.

I’d recommend saving to pull Gefjon costume instead. Pairing with Marjana costume, with 7-tiles you can confirm kill 2-3 depending on the board.

Why hit 1 when you can kill 2-3? Therefore, offensively, Hohenwerf is not worth it unless you got 3 of him lvled up so they can cast together.

I agree in the sense his damage is “just” a sniper but that’s not the point of him IMO - it’s the mindless attack. At fast you can shut down an annoying healer like xnolphod (as in @Homaclese video) or stop the Khufu bomb going off or MN etc. Mana control with a good snipe and stoneskin on top is how I view him

It makes sense if he is very fast. Because there isn’t a red combination at very fast that can kill.

But at fast speed, you can just kill 2-3 opponents already, why bother with a mindless attack? Why give mercy to the opponent lol.

If the opponent has just 1 HP, your tiles won’t ghost…therefore you don’t get double mana. The goal is to create as many gaps as you can to turn the battle in your favor. Otherwise the opponent will always gain mana faster, and hurts you more.

I know when I faced him, he had half my team incapacitated and it was a struggle to try to get enough mana without losing it to mindless attack and then have one turn to fill it after mindless wore off before that hero was disabled again. He may be better on Defense than on Offense.

Fiend prevention is paramount when facing him. Gaillard value just went up a lot.

Now that I have Hohenwerf, he seems squishy. He’s leveled and Limit broken(81) and only 4 emblems in. I may choose to go shield emblem path to give him some lasting power against damage.