Slow and very heroes SHOULD be very hard to recover from, or what’s the point? If they aren’t, they’re not worth it. May as well just run a bunch of hits 3 for 300%+ at fast mana…

I would love to see some videos of this claim that Khufu is wiping out entire full health level 85 teams in 1 special, that aren’t debuffed against an attack buffed Khufu… please someone show me?

Slow and very heroes SHOULD be very hard to recover from, or what’s the point?

Agreed. Which is why I said what I said:

Regardless of circumstance, all heroes should be able to be countered reasonably, including post-fire. The slower they are, the harder it should be, but should still be possible.

I can’t say whether or not Khufu OSK a fully (or near) healthed team (even without support), as I neither play in the meta, nor have Khufu to testify to. However, if he does, that

Level 85 teams are minority in E&P.

I can tell you, that he deletes 80% of HP of +10 emblems 5* setup, which I use most often and there isnt a single other hero, that does what Khufu does to same extent.

If you combine 80% of dmg alongside slash attacks that were done prior (in case if Khufu goes before my healer), that literally amounts to Khufu wipeout

I am actually not proposing Khufu nerf, but remaking his special abit, so he doesnt work completely braindead :

I’m with the majority that he needs to be nerfed. He deals far too much damage, 450% to all enemies as long as it chains. I fought a team in war with healers/taunters and the sole offensive hero being Khufu and I got wrecked

This hero deserves a nerf, he’s so OP. I can’t think of any other hero that deals damage to this extent.

Slow and very heroes SHOULD be very hard to recover from, or what’s the point? If they aren’t, they’re not worth it.

Maybe some others I forgot.

There are plenty of ways to counter Khufu. Ranging from minion protection to attack down or def up… Dodge works perfect, just like taunt.
When I go against Khufu, I always take an average speed (over)healer with strong minions (Arco, Hulda). Often I also take a counterattack hero like Azmia (yes, 4*).

Like all strong heroes, eventually, you can find a way to counter them.
It is indeed true that it mainly becomes an issue if you face multiple of these in the same team…

ref my response to Homaclese.

What is third charge - 14 tiles? So very slow equivalent, or maybe even a bit slower than very slow. At 3rd charge I agree she is devastating. But she rarely hits you at third charge

Definitely a big hit, but not as devastating as 450/520% with sand damage (at slightly higher attack)

Can almost always be managed in a way where he won’t get anywhere close to the highest hit. But sure, let’s put him in the same OP category as Khufu

Again, the damage is not comparable. She is great in offense but in defense she will rarely get the mana gen benefit as you won’t be bringing minion makers

She is very fast. So completely irrelevant in this comparison.

So we have… Goseck as a maybe - very condifitional depending on his health. And Ruby as a maybe - and only at third charge - and slower than Khufu.

So in all of E&P land you found 2 heroes that conditionally have as devastating an impact at Khufu - one slow, one slower - vs Khufu’s unconditional devastation.

So in all of E&P land you found 2 heroes that conditionally have as devastating an impact at Khufu - one slow, one slower - vs Khufu’s unconditional devastation.

Not to mention, BOTH Gosek and Ruby are Barbarian so they are not resistant to blocking special skills - meaning they are MUCH easier to counter.

You forgot Snow White costume.
She can deal 1.3k+ on targets with White Rabbit DD in offense. Rest of the enemies are hit around 1k average. 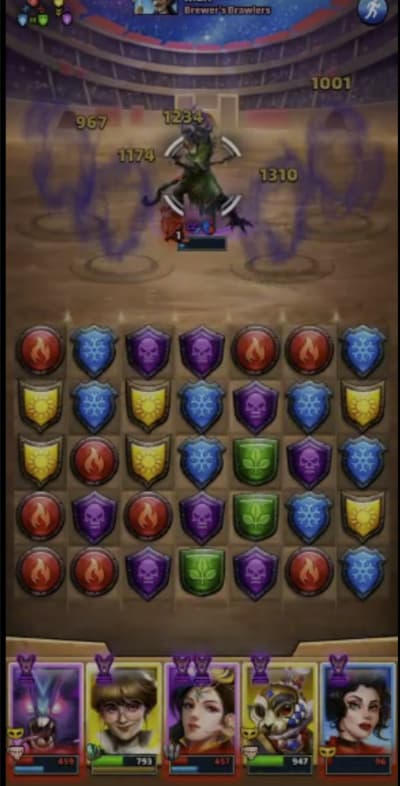 I also have Khufu. The major difference betwen them is; Khufu does not require any conditions to deal the similar amount of damage while I have to set things up for SW.
Another difference: SW dispels counterattack and anything similar before dealing damage while Khufu backfires therefore you have to hold him. The only exception to this is, if enemy Kong has cast his blue reflection, SW will also have to hold.

Today’s aether offer was red… so they might be planning a nerf soon.

I am waiting nerf after the red aether quest, when all Khufu owners break him.

Going to wait a bit, myself. No rush.

It may not look like it, but my team managed to take out both Khufus.