This thread is for discussing whether Elradir is well-balanced, or whether you think he needs a buff or nerf.

This thread is NOT for general discussion of Strategy or Summons related to Elradir. For that, please see: Elradir – 5* Nature/ Green - June 2021 HOTM (Hero of the Month) -- Initial Release

In short, to neaten the forum and to give players and outlet for their thoughts on her balance without bogging down the rest of the forum or the other Uraeus thread.

This topic was automatically opened after 36 hours.

If Elradir main purpose is to be counter for DOT dealers like Gravemaker, Vela and Clarissa, perhaps Berra his mana speed should be fast in order to keep up.

He is not very good for titans and practically useless in defence. As an attack hero with not very high damage he needs to be able to utilize his second skill fast in order to be somewhat usefull. Otherwise he may be efficient only against Azlar. May be also against some of the sand empire heroes.

In this case the strategy will be as follows:

In all cases in order to work Elradir has to be hit so he should work best against AOE attackers (so the hit is guaranteed).
However AOE attackers usually have devastating damage and the DOT is just in addition rather than main damage. All other heroes that have more DOT than straight damage are either fast or very fast and Elradir is hopelessly too slow for them.

Elradir looks very cool on paper but it seems he has no purpose. He does not help the team (except mana link) Ailments have to be present in order for his skills to work which is not good for the rest of the team either. If the rest of the team is heavily damaged he can not finish the job himself. He may prove to be worse than Reuben.

So many things have to line up for his skills to work that it makes him useless altogether. If everything lines up perfectly you would probably win the battle with or without his DOT reflect.

He should be used primarily for attack but I think both for attack or defense he should be in the middle so in case his reflect skill is on to make the enemy choose to only hit 2 with DOT like Gravemaker or Clarissa or get some damage back. This will make him a defense tank but he is not build for tank.

If he is fast or may be protects (with reflect skill) the nearby allies as well may be he will be useful.

You need to buff elradir, even the community votes for it…

Buff everyone to keep up with the power creep in heroes. Even if it just the base stats. You did emblems poorly, you did power creep, and now we have these element things. Let me have my 5* and be within a reasonable power range to each and every other 5*. Good job on costumes though, I like those.

Elradir is niche hero but he is absolutely amazing in what he is doing and his elemental link is very usefull.

Who did, what, where?

even the community votes for it…

The majority of players think he’s not underpowered. 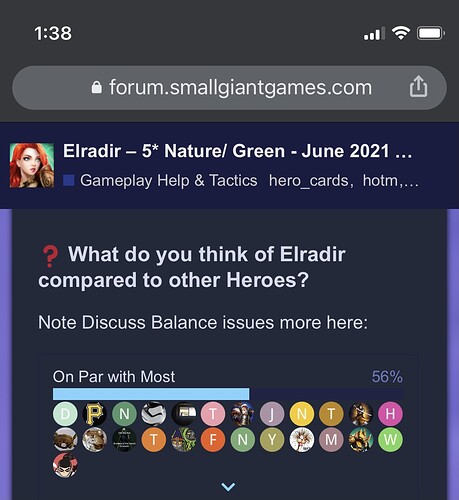 He’s a great hero when used well. Needs nothing.

Elradir in underpowered, his special reflect needs to buff adjacent heroes as well to be even slightly competitive. The nature heroes can easily be divided into two categories: beasts and bar stools.

Elradir is missing something even for a niche heroe…
He definitely needs a buff in HP in order to survive and use his reflect skill more.

And his special skill absolutely needs one more addition…

Welcome to our new Hero Balance sub-category! Please share here your feedback on hero balance. Which Heroes would you like to see balanced? Make sure to search topics first, please don’t create duplicate topics for Heroes. Only two topics per Hero is allowed, one for nerfs and one for buffs.