NINETY THREE WEEKS!
2 NON S1.
Yeah I’m pissed.
What’s worse is as ftp I felt super lucky since I don’t have many non s1 but the ones I have are of the best. Frigg is one example. I can’t believe I pulled her, yes she’s the only s3 I pulled with my coins but she arguably the best s3 hero. But then I see her in SE and while I still love having her it kind of sucks knowing you can just “buy” her. I mean congrats to those who took her but I feel less exclusive if that makes sense. I was lucky enough to pull g. Panther with costume a while back and one of my 2 ha10 results was a dupe of her so I’m still super lucky cause costume panther x 2 is insane.
Anyhow 93 weeks! Clarissa came up in week 18, 2 weeks after marjana in wk 16 who evaded me in tc20x3 for years at that point. But then over a year of nothing except dupe isarnia, Richard costumes and a new khagan costume(original costume).
If I move to the mean that means 3 non s1 in 7 weeks. Hopefully a yellow like onatel or another hit 3 or hot all since my only yellows are 2x joon and Leonidas no costume on either. Justice sits at 1.1, viv I use in wars mainly. My only non s1 5 yellow is Hanitra who is nice but no attack. I need some RNG help!!!

I have a request which I posted before and many used it. Some of us are over 50 or 100 ha10 trains so I know you want to keep track but could you either not post the s1 — s1 posts, I mean does it matter if quintus turned to Richard or isarnia to azlar?

Definitely post the number of weeks you’ve run and the non s1 results or s1 costumes but the s1 to s1 lists are a lot to scroll.
If you want to keep the list in the post, you can hide it. At the top of the box you type in on the far right is a cog for the settings menu. Tap and you’ll see hide details. A group of text like below will pop up.
You can also just type it yourself. You can change the word summary to anything like Complete list or something else. Then put the text you want hidden and then your title (or summary if you don’t change it)will be there with a drop down arrow.
If you tap the settings cog it’ll put the text below but it will have a ] after the last line after the s in details. I took it out so you can see what it looks like. I also put in a list so you can see how it’s hidden.

[details=“Summary”]
This text will be hidden
[/details ------ normally a ] is right after the s in details but to show what comes up I had to move it or it would have just the instructions as I did below.

General comments. Anyhow just a suggestion good luck to you all.

Mitsuko is my only s2 5 and yes she’s old but I have her LB and with emblems. I will say that I still use her and with the right troop she’s “fast” I don’t fear blue heroes and I got her from Atlantis when it was released so I’ve. her awhile. So you can use her to attack green but also “attack” blue. She got me through many events as the bosses finish themselves off.

There’s a lot of great choices in fated summon I don’t know your roster but that reflect blue is rare. Only recently did G. Kongs costume get it and ursena is really only other with the yellow reflect. She hits 3 plus cuts mana enough to hold off an attack for a round plus that reflect skill is the most useful part. As long as it’s active ice heroes are useless. 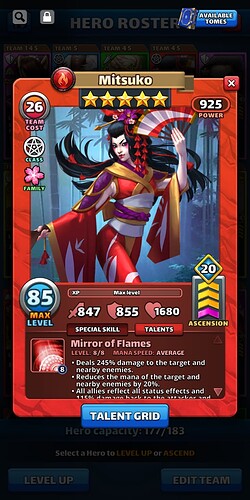 Congratulations. Even without costume Panther is a very good hero because of EDD.

I’m planning to take Mitsuko from FS as I’ve always wanted her and I got all the materials to max her. Which emblem path is that?

I just got her for the SECOND time. Really? Of all of the non season 1 heroes I could have gotten I get the one they’ve already given me??? Ugh.

My retrain are on Saturdays. the last was Richard and Returned Aruna (Azlar).

Let’s support this idea, what do you think?

It’s been 27 retrain since the day I started making them on April 16th and so far no non-Classic Heroes or a Hero Costume, only Classic Heroes. That’s why I propose the Fated Retrain that every 20 retrain on the 20th comes a non-Classic Heroes or Costume Hero, the counter being reset after getting a retrain different from classic heroes. Sorry for the English of the Translator

That would be amazing. Ha10 is a giant waste of time for me.

Here’s the path I used for mitsuko. 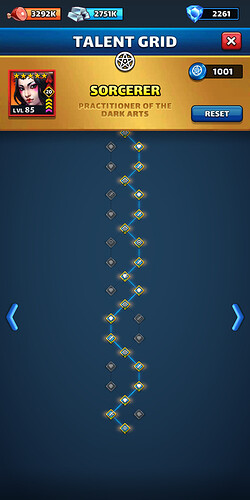 Heres mine, i gave her a bit more bite still good defense stats but i only use her on offense and usually against green tanks so thought it better to give her more atk, she can still take a decent amount of damage though

Seems we have the same thoughts lol

Which hero did you receive in Soul Exchange?

Did you choose Alfrike over Ludwig?

Well yes, i was considering at 15 cobalt ludwig and christobal
For 20 it was either gonna be faline or alfrike, i have costume magni so Finley costume wasn’t to big a priority as hell always give def down to 3
And as attractive as faline is cuz of dark tanks at fast mana alfrike is great not only in vf war and tournaments but also amazing in stages and events plus i use her on offense pretty regularly too with a mana buffer like d’andre

A dupe but at least it is a non S1

I would have prefered another S2 : Mitsuko, Ariel, Poseidon, Kage, Ursena. I already have Tarlak and Inari maxed.