I don’t think they have “sunk to yet another new low”… They just found another way to express exactly how low they really are.

HA was never good to me, I really don’t know whether it’s worth using so much food to get S1 crap every Time. I
Completed 2 years of HA retraining today. This will be my last retrain for now. 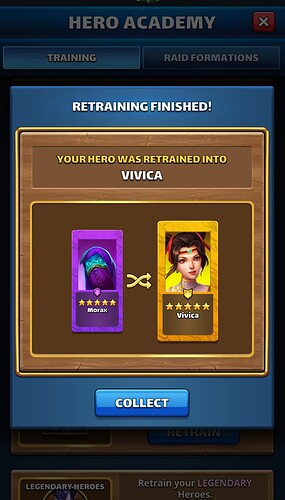 Nah as mention you can only get 1 costume at a time from ha10, gotta make us spend somehow right lol, cant just buff old heros like other games, but apparently the company that bought either the game from zynga or boufbt zynga apparently is loosing $ on E&P according to anchor today, doesn’t surprise me, alot of veterans who dropped big bucks on this game leaving cuz the lack of progression and the just basically releasing more and more and more heros its a bit much, hard to keep up if your in a top 100 alliance. Only took almost 6 years to get any sort of mercy system and trust went downhill when they nerfed telly and vela then krampus costume and buffed already OP heros, anyways ranting now, point is alot of stick for little

Retrain number 108: Sartana back into Richard. Had she turned into something I wanted to keep, I’d be out of dupes after sacrificing them all - and a lightly leveled Horghall - for Ludwig yesterday, but that would have been a good problem to have. 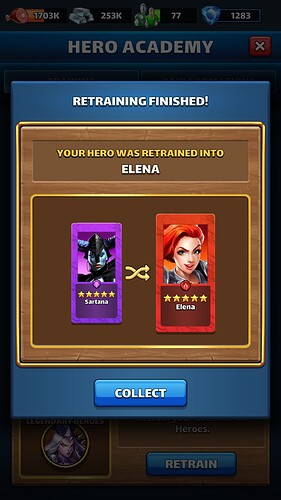 You all know what day it is so prepare yourself for utter disappointment. Forgot i hit my 100th retrain last week so overall I got a dupe of jean francois, neith and C kadi so 3% non-s1 and 2% useful. Almost as good as the old taven 5* odds

Be back next week to help dour my holiday spirits.

Do we know what the “odds” are for costumes vs non S1 heroes in the HA? In two years of training once per week I’ve only ever gotten one costume. A dupe Joon.

Do we know what the “odds” are for costumes vs non S1 heroes in the HA?

5% for both, calculated independently. So, theoretically, you could get a non-S1 and its costume, but the odds are super low.

My weekly dose of weakness: Azlar to Vivica. No costume, natch. Horghall goes in, see you next Sunday

Just as well……fed away all my duplicate 5*’s for soul exchange.

Few weeks passed since my last update but HA10 has been somewhat kind to me during that time.

#104 gave me Anzogh and then after a mighty long 42 weeks drought, #111 finally spat out a costume in c.Khagan! Not the costume I would have preferred after all this time but both are new to me so I’m quite happy! 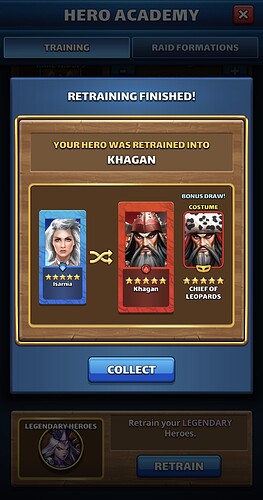 for everyone and keep those retrains coming!

Way too keep after it even after a year of trash. I’ve only gotten one project from ha… One that i wanted to fully level…

And Kadilen right back in. Here’s hoping for the next one! 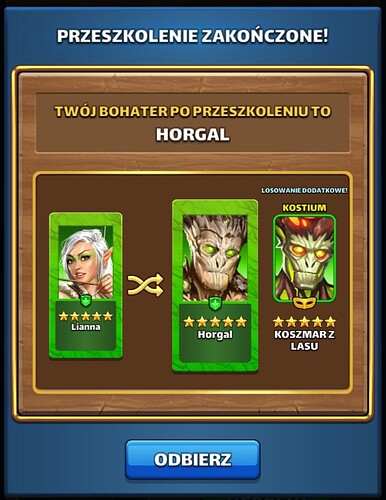 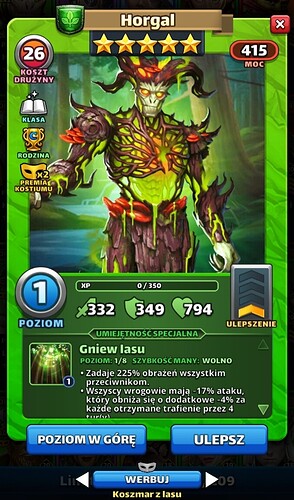 75th or so retrain was kind to me again: 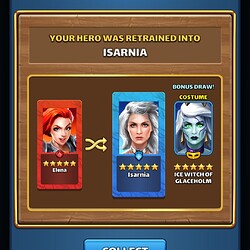 I like the second costume artwork better but i don’t mind. Actually, I’m thankful for the costume bonus because the -44% DEF down version is still the best, IMO. Since her main use for me is on titans.

I have her maxed already and she’s fixed at my titan team: 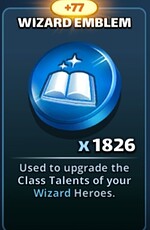 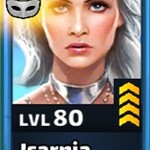 Plus… I’ve been thinking in giving her emblems since I have 1800+ wizard emblems on stock. Had more but Kashhrek also got some. Now, for sure she will get them.

Fun fact is now my only Ice legendary S1 costume missing is Magni. Have C.Thorne+20 and Richard is not maxed, since I have Vela for his niche🥶

Isarnia went back in, since I have one copy maxed already. I’ll work in this costume after I finish Obakan second costume. Good luck you all.

See you in 7days!

I am starting to wondering is there any costume chance here at all.
I have lot of retrains so far (it’s running since 2021 january), but so far it could give only 1 costume for an S1 hero.

I guess my Hero Academy is cursed on this matter