I know these threads get created quite often so I apologize for that, but I recently got enough materials to fully ascend a 5 star character of each color. This is my current plan: 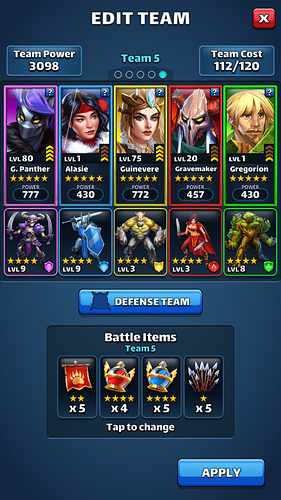 I know Gregorion doesn’t really fit into defense teams that well but he’s my only 5 star green hero. He’ll basically be a temporary addition until they bring back Zeline or release a better green hero. If I get Lianna while leveling him I may also switch to her, but I figure he’ll be useful for titans anyway.

My main debate is choosing between Magni and Alasie. Both fill the same role, and I was primarily thinking Alasie because I figured it would work well with Guin’s special. Whenever I look at defense teams in the rankings though I always see her paired with Magni for the defense buff rather than extra mana debuff.

Other than that, my other 5 star characters include Elena, Khagan, Justice, Vivica, Domitia, Delilah, Sargasso, and Richard.

Any advice would be much appreciated!

I know this. But I currently only have the mats for a rainbow team. Maybe in 6 months or so I’ll have the materials for another Yellow or Purple hero.

Mats for a rainbow “team” or just five heroes of different colors?

Sorry, my answers are too short.

That roster at the original post is quite nice, but a looong way from anywhere. To finish them will require massive resources. That requires a somewhat more finished team.

You do not have to take any hero beyond 60 while you are forming a foundation. Can you put a solid bunch of 4*s around one or two of those keepers? Use that team to raid and attack titans. Just don’t look at them as a strong team because they are terrific individally. That is the way to waste lots of flags and time.

The team I showed in my original post isn’t an actual team I’m currently using. For attacking titans I use a maxed out Wu Kong, G. Panther, Boldtusk, Grimm, and Hansel. My defense team currently isn’t a rainbow either, but it uses a 3/70 Delilah and a 3/70 Elena and a few others.

I know finishing these characters requires a lot of resources and as I said, I have those resources. I’m just looking for advice to see if this is a sound 5 star team or if I should switch out Alasie or GM.

I know Greg isn’t the best option, but he’s still a decent sniper for now. If anything I think he would be the only hero in my lineup to not fit a proper “team”. But as I mentioned, I’m going to replace him eventually. I’m just looking for the best 5 star team for what heroes I currently have. Unless it would be better to have a maxed out 4 star or 3/70 5 star in his place.

Essentially, pretend all of the characters in that screenshot are 4/80. I’m going to be power leveling a 5 star red, blue, and green shortly and I’m just figuring out who to pick to form my team.

I would not use rare assets on any temporary solution. If you think Gregorian will be replaced, I would look for a work around. Otherwise, the group looks good.

My preference would be to lose Greg and rotate Alasie, Magni, GM and Elena if you can pull the mats together. Of course, I like experimenting, and hate stasis.

To me the Alasie/Magni debate comes down to whether the heroes you’ll be surrounding him with need the +def. Guin certainly doesn’t, but the others do. I have the same problem, and I’ve postponed the decision and am working on another hero in the meanwhile. Search for the Alasie vs Magni threads and see what else people have said.

Everyone else looks great with the possible exception of Gregorion, but you know that. He still hits hard…

I have to say, that looks like the beginnings of an absolutely devastating defense team. I am a bit jealous if I am being honest. I also completely agree with the other posts, don’t waste precious ascending materials on Gregorion if you plan on replacing him (which you should eventually). A great way to figure out your best defense team is to look at the list of top 100 players and look for patterns in their teams. I do this all the time and Guin, Gravemaker, Panther, and Alasie are all in 90% of the top teams. Once fully leveled, this team here will be amazing. Keep your training camps up and look for your 5th. I personally like to use a rainbow defense team, but a lot of people definitely do great with stacking. Now to keep grinding to get those heroes leveled. Good luck, and nice team!