Help me prove a point – grid calling system in wars

@Dudeious.Maximus - this was the thread I was thinking of, which explains battle positioning. In particular
yelnats_24 posts.

Battlefield Placement/Sorting – How is the Position on the Alliance War Battlefield Determined for Each Team? Gameplay Help & Tactics

Any idea what the alliance war battlefield placement is sorted by now? It seemed like before it was age in your alliance. Oldest was top left, newest bottom right. Now it isn’t quite defensive team power but seems like something close to that. I wondered about your individual roster score/contribution to the overall alliance score. If so that has interesting connotations when you look at where folks are.

Thanks will have a brouse!

Maybe my original post didnt really send the message so I’ll give a small back story:

In my previous alliance about 6 or so months ago we were still listing targets by name in war.A part of our leadership tried for us so start using the grid much like your second picture with A1 A2 along the horizontal axis.
Anyways, he added a picture like this into our group chat in Line and clumsy wrote " (names) war grid" on it calling it his own.
He was giving himself Pat’s on the back about creating a grid that was ahead of it’s time NUMEROUS TIME and again today months later and I’m sure I had seen it on the forums already and have said people have been using this before you have even started playing.
Today he said “prove it” so I was hoping to find this grid with a time stamp that is 2 or so years old.

Do any places have some advantages or disadvantages?

So as to unambiguously refer to a specific opponent player – even when your keyboard doesn’t have the keys you need to write the opponent’s name.

(Well, almost unambiguously. Usually unambiguously. When elders, co-leaders, or leaders are appointed or demoted, the players move about the grid, and suddenly A2 is a different opponent player …)

Also if I leveled sth after setting up the def or changed it, I moved from front to back, from wing to center or vice versa.

But to know how that works or why, isn’t of any use or is it?

It doesnt help being on a different spot on the war board, it’s just for curiosity sake. I’ve wondered that myself a while back and have read that thread. It’s not what I meant by my original post.

We stopped using grid system due to opponents shuffling themselves around the board after targets were marked. Now it’s just “don’t hit anybody with TP greater than 4300, and leave alby/MN teams alone until second half. FFA at 8.00 on war clock.”

What were you tagging me for?

Wars didnt start until febrary of 2018 and were bugged to hell and couldnt even run on a regular schedule due to poor testing, rushed development, and obvious oversights from the devs

If i recall, the grid became popular about 2 to 3 months after wars were officially released but memory could be fuzzy

I have an ex allaince mate who believes he is the O.G. of the creating the grid calling system in wars.

Given that 7DD promotes and uses it indicates to me that it was probably already in place before your alliance friend started playing. I mean, it is a pretty extraordinary claim; hard to disprove but almost impossible to substantiate.

Thanks all, that should be enough, I believe the original creators of such things should be commended not overwritten even though it’s common knowledge now is all. Give credit where it’s due. I just felt this claim wasnt legit and yall have helped me prove its validity. Ty

I know I made one a long time ago. I dont recall seeing one before that. Then someone asked if he could reverse my grid for smaller alliances.

Since then, I’ve seen at least three variants that all seem to have been arrived at independently.

Basically, the grid is a great idea that eventually everyone has.

This is the grid we use (best for full alliances): 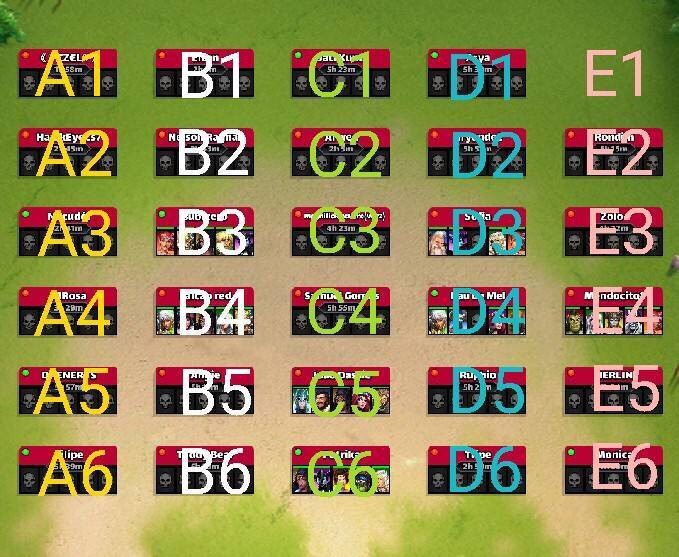 A friend made me this version of the reversed grid when he thought someone had “stolen” my grid: 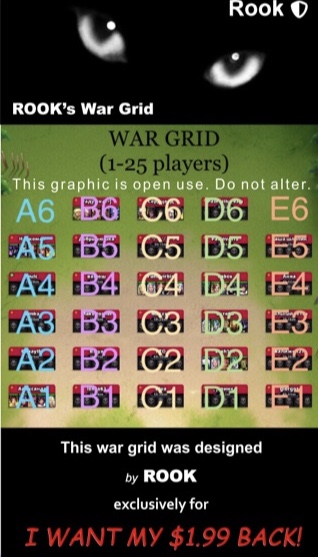 Numbering participants in the war - #6 by Tough_E_Nough

Thanks @Rook and @Rigs ,truly reached wizard status of the forums. Thanks for taking the time.

HMMM I am the leader and I am always C6

Well your c6 on the blue side

You’d be c1 when opponent looks at it…

I looked at the Battle field placement and I do not think they have it right at all.
Me leader always c-6 my next in alliance and moved to co-leader and my strongest team mate is always on back row somewhere.