Hello ... I'm tired of buying and did not get what I want so I will not risk again and I will not pay one dollar anymore

What @Sorsha and @Fantastic said. And to add one more thing, you can play this game perfectly fine without spending any money. You may not have much chance at event heroes or heroes of the month, but that leaves many heroes that you can get. If you’re willing to put in the time and effort, eventually you can build a level 20 training camp and train 5* heroes without spending a dime.

Lol. Make sure your of a young age. Cause by the time you get what you want, 20 years will have passed. This game is becoming more of a pay to play game now. onky way to be in the top is to spend money. It’s that simple.

This is being said a lot now. I’m not sure that I fully agree, at least not with all aspects of it. I’m personally not entirely F2P, but spending very very moderately (less than $10/month on average, trending lower now). While I have no HotM’s or 4*/5* event heroes, I do not feel that I can’t compete where I am, which is certainly not the top 100. But that doesn’t matter. Will I ever get there? Maybe, maybe not - it would be nice, but that’s not my primary goal of playing. With so many active players and alliances, only a relative few can say they’ve reached the top 100, and it would be a sad state of affairs if the remaining rather vast majority would feel unhappy just because they’re not in that elite top group.

So the point I’m trying to make is that you don’t have to be in the top or even anywhere near it to enjoy this game. It’s a long long journey from the start to having a 4000+ team and a full bench of war heroes, and you can compete where you are with players similar to you the whole way, hopefully in a alliance with similar and like minded players also. And have fun the whole way. I’m still on that journey, and enjoying it, like I have for almost a year now.

That’s just the way I see and experience the game anyway, I’m sure not everyone will see it the same way.

I understand your frustration in that your expectations were not met.

You are always encouraged to spend or not spend your money as you deem best. It is true that you can get 3*, 4*, and 5* from Training Camps lvl 20 (and lets be realistic here, it takes time) for free and I believe in the chance so strongly I have four TC20.

Also be aware that it is much easier to raise a 4*, and 4* at maximum are usually stronger than a 5* before final ascension. The longer you play, the more you will encounter this.

Did you buy something and get nothing ? If so, that’s a bug and you should file a support ticket. Or did you buy something (like an Ascension Pack) and get garbage items? That’s a risk—these purchases just provide a chance to get things. Most of the time you get crap.

Thank you @Kerridoc for enlightening us with this simple, but true fact. A copy will be shared in Just the place for a Snark! I have said it once .

Well said. I’m just worried that the devs have to save the day before some of their big hitters leave the game for good. I’ve already noticed a ton of big hitters have left, and they have also opened a claim through I-tunes for money back. I know for a fact one of them has gotten back over 500$'s that they spent over the last 90days. It’s going to be interesting how all of this will play out in the end

Consider competing in challenge events for guaranteed rewards. The random pulls are pretty random for such a small sample set…

I think reading helps, though obviously if one is unfamiliar with RNG and Gatcha-style games, not winning “the big prize” is going to annoy. Transparency may or may not help. Hmm…

The main purpose of marketing is to make look things better than they actually are. So if someone states one can get super trooper hero from summon portal for reasonable price converted from real money into game money (gems), there has to be a catch. And there’s one and its name is chance:-) I haven’t seen any trace of misleading info in the game, just well placed marketing proposals. You indisputably always get what you’re paying for and that’s 3* hero or better one.

Pretty simple. Uninstall and remove it. Take therapy classes to help ease the pain. No one is forcing you to pay for this game. It’s a game of chance. That’s how it’s always been and will probably continue to be. Just wait till you see what’s in store for season 2. BETA was cool. I like it.

It’s certainly bad luck. I don’t think it points to an error in coding, though I would agree that it’s not good game design. My casual guess is that this issue is the #1 reason why paying customers leave.

Good morning, when you spend money frustration is also mixed with the rage of having spent money uselessly. I just lived those feelings myself trying badly to get a hero I have wished to have for a while. Because of that , I came up with an idea that I hope could sound reasonable: wouldn’t it be great if, now and then, they’d put on sale a rare hero for a special price?! Just like special offers but with the addition of a rare hero. It would make everybody happy. Dev. Would make money, players would have their hero without having to spend a fortune trying to get it and feeling upset when failing!

There would then be the cry of outrage that the hero was “easy” to get for the P2P crowd, and difficult or impossible for the C2P/F2P crowd, mixed with accusations that SG is now catering solely to the P2P (pay to play) group, as well as having sold out to their Zynga “overlords”.

I personally would not suggest it.

EDIT: I understand the temptation, but it makes the game “for sale” and knocks it out of balance (some might say “further out of balance”)…

Cool story bro. Do you have more of them?

I think there would also be outrage on the other side, someone who spent $500 to get Kage would feel robbed, because SG gives it away “cheap”

I’m curious what the actual current going rate is for Kage these days? I’m C2P, bordering on F2P, so i get Agwe and Cyprian when i roll, not Kage…

wouldn’t it be great if, now and then, they’d put on sale a rare hero for a special price?!

Actually you can buy a rare hero: 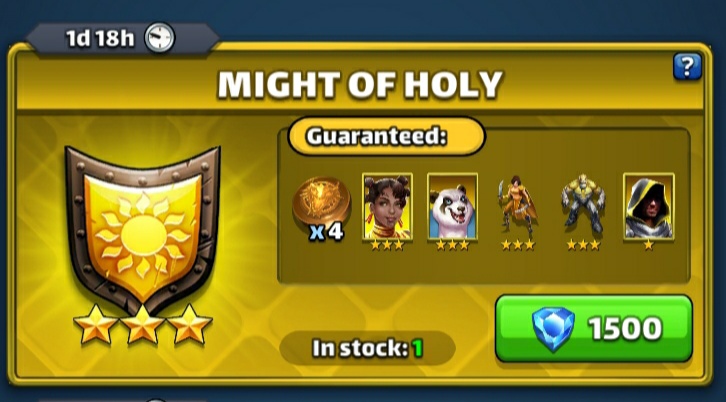