The final boss of the currently available S3 content, as well as his minions, are currently not scaled correctly to hard mode.

Both him and his 1st stage minions hit like pool noodles (minions for about 80 damage on 800 defense, Ymir himself for 200-300). In comparison, the basic mooks on the previous stage easily hit for 350+.

In addition, his health of 28k in second phase is, I believe, equal to normal mode and an oversight as well. 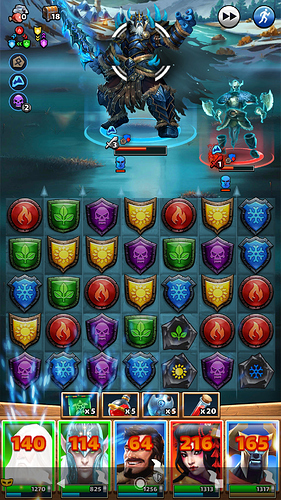 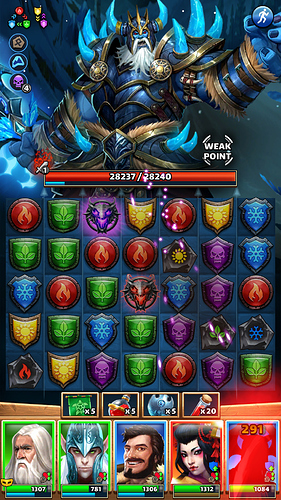 Really? I am rushing through the hard levels just to get to that fight, normal was fun but too easy I was hoping for a decent challenge.

Well, you have the def boost from Magni active, so without the +63% I think it would be somewhere around 400 per hit? IMHO, for the first stages the challenge is higher ( on hard mode ) as it is on Stage 2 so it is OK up to now.

Magni with the 63% defense buff has about as much defense as Richard without one.

The issue is in comparison - the previous stage boss hits for 700-800, and his special does much more than just polish Richard’s chestpiece.

So, any word on this? Is Ymir supposed to be pretty much identical in normal and hardmode?

There was a bug with hard mode Ursena like this last year, so it’s not outside the realm of possibility.

I’ve also got the feeling there’s something wrong with Nordri’s HP on hard mode. Far too little compared to the other bosses. Should have made a screenshot, but forgot…