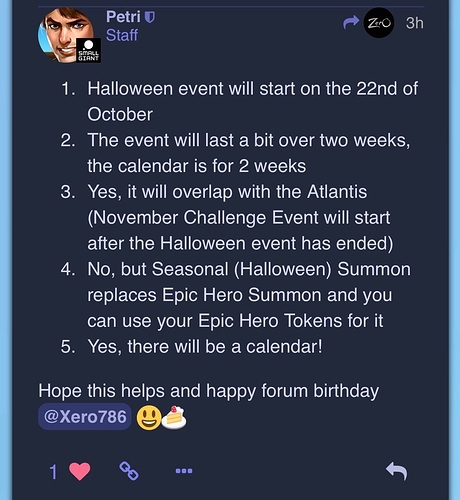 Can someone please explain or describe the new Halloween heroes?

Taken from Kerridoc in another thread.

They’ve been adjusting the design of the vampires a lot in the past few days. They do well against healers because they leech most of the healing over to themselves.

Hope athena will be available in the next atlantis portal .

You have to be very lucky then to pull one of these if there are only three of them. Not worth it imo.

Is Vlad as a 3* going to be available as a possible Daily Summon reward? Or will it only be attainable in the event summon?

The Halloween heroes will be in the epic summons - so can be summoned with gems or an epic hero token. Seasonal or event heroes are never available in the daily summons.

Thank you for the confirmation!

I kinda want that 3* hero

i also want sand empire Hisan 3* hero. I don’t know… i’ve started to like them

Hisan is really good (for a 3*) because of his high attack. Vlad is a tank, which makes him less interesting to me personally because I only use 3* for challenge events.

As Halloween heroes will be considered epic, will they also be available in Atlantis summon gate? Anybody knows? Maybe Mr @Petri knows?

And if you put Squire Wabbit next to Gato, you can avoid the rabbit’s self-debuff.

Is that so? Nice to know… thanks

For more information on the Halloween Special Event, please check out this new announcement: