This thread is for discussing strategy related to Guardian Lemur, as well as your thoughts on him. 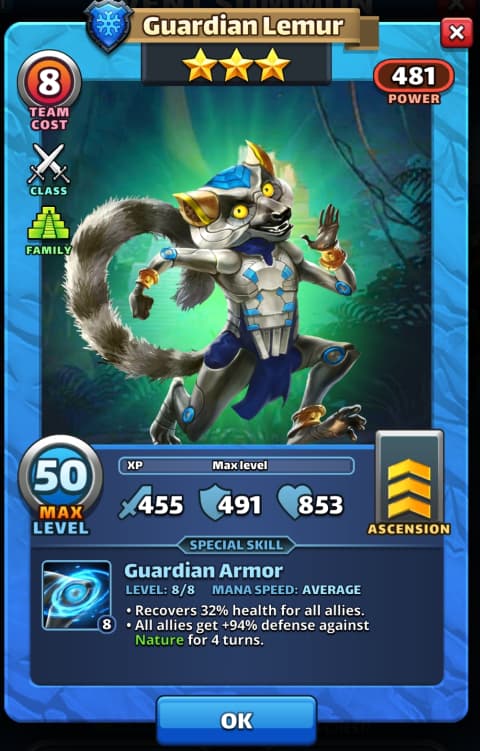 There appear to be no changes to Guardian Lemur from last-seen Beta stats, skill, and design.

What do you think of Guardian Lemur ?

This thread is for thoughts and discussion on Guardian Lemur.

Based on preferences Forum members have expressed, please try to stick mainly to Guardian Lemur and not wander off topic too much to other heroes.

Is Guardian Lemur worth Summoning For?

What do you think of Guardian Lemur compared to other 3* Heroes?

How many copies of Guardian Lemur is it worth keeping & levelling?

What do you think Guardian Lemur’s Primary Purpose is?

Is Guardian Lemur worth giving Fighter Emblems to?

Where do you think Guardian Lemur is best suited on defence (in a 3* arena)?

How do you think Guardian Lemur will be best used?

At the beginning of season 4 Helo was my only rare blue hearler. I quickly maxed his emblems and have since limit broken him. This month I pulled Frosty and leveled him. I’m not 100% I’ll use him. I have struggled against Frosty in raid tournaments due to his minions adding extra health, but more so due to his rogue talent.

Now I’m struggling to figure out if I have any use for Lemur. They all have the same base heal and pretty similar stats.

Challenge events: everyone knows mono is pretty optimal in challenge events (or at least it has been). Helo has the highest base attack. This could potentially change with emblems, but again pretty similar. Minions are pretty much a no for events (if you’re looking to score). How often will I be using mono blue if I also look to benefit from nature defense? It seems cleanse has the best secondary use here, but none are super optimal. Actually now that I think about it, I stopped using healers in most rare stages. So maybe this category is moot?

Tournaments
Buff booster Lemur gets an edge here for the defense against Nature. Here it may be more useful as a faux 20% attack buff than the actual defense buff.
Rush I could argue all three here. Clenase is not too common for rare heroes. As I look at my top 26 rare heroes (f2p roster), Tyrum is the only other cleanser I have. Minions aren’t super common either. Other than Kvassir, Frosty is the only rare minion hero I have. But I consider his minions just extra health. I don’t see bringing Lemur if I need the defense against green. First situation I can think of is a red tank with Noril in the defense. All three have their uses.

Disclaimer: I’m mostly talking from a seasoned player perspective here. If I was new again, I’d gladly take all of them because I can always use more healers for many aspects of the game.

Overall: I would put Lemur as the worst rare blue healer. Frosty has rogue class and Helo has cleanse. Both have come in handy for much more than I imagine defense against what this hero is weak against will. If you only have one, they’re pretty interchangeable. I don’t think Lemur’s stats are a big enough differntiator.

In the Challenge Festival this hero is the only rare healer who does not receive the -25% attack/defense/health/mana generation.
So it can be used there.
If the event will be as hard as in Beta, then you will have 0 chance to complete the last 1-2 Rare stages without a healer.
It was even almost impossible even with a healer.

I have climbed until Floor 37 on Impossible questline in the just ended Tower of Magic.
My final completed floor was much easier what we will face on this event (based on Beta experience) at the end of Rare and Epic difficulties.

I missed the obvious benefit!
Now I have to wonder if lemur is worth leveling for the 1-2 times a year he’ll be used just to complete rare.

Nice hero… My only beef is not really one of gaurdian mobs yaah face, I’d rather it be the flying bird thang or the cat reminds me more of teltoc (rip)

Depends on your play style, and roster

I think Lemur is the best 3* blue healer ( see notes )

Definitely nice, 3* cleanse is helpful since Map Season 1 love defense debuff and so do 1* to 5* Titans

who does the job with no stress and i have another 5 or 6 3* hilers of course includes those 3 classic ones with costumes as well. So I just finished to do the snow man hiler as well and in my opinion his better than lemur for some reasons including minion’s as well and he cleaned up all team which lemur give you only green defense. Well that’s my opinion

my best hiler is Grivle the green little bear

psst… He’s a badger. But you’re quite right about him, he’s great. I suppose Lemur is useful where you can’t use green.

So I got him from the portal yesterday ( still missing Sally) I already have both Frosty and Helo so he isn’t on my list to do right away, but an extra healer and big def boost vs nature is never a bad thing so I’m quite happy with it.

Exactly what we needed. Another 3* Ice healer. Man, we were starved for a 3* healer. Now we get 3 of them to choose from.

I favor Helo for the fact that he is also a cleanser. I do like Frosty’s minions.
But this part…

Buff booster Lemur gets an edge here for the defense against Nature. Here it may be more useful as a faux 20% attack buff than the actual defense buff.

…gives Lemur an edge in buff booster tourneys. In any case, because Lemur is an event hero, he’ll be a keeper for me.

I’ve had it for almost a year and haven’t actually used it. Frosty and Helo have +20 talents with me, Lemur has 0. I might do it before the next challange festival for those 20% stat bonuses. What do you guys think of this hero?

What do you guys think of this hero?

Haven´t maxed this one and not planning onn doing it. Helo and Frosty are more than enough for my needs. I don´t think that the challenge festival is worth upgrading a hero. Might also be a little better for buff nooster tourneys, but still…