Does anyone Else think guan yu could use a rework/ buff.

Guan Yu is amazing as he is. I am even working on 2nd one. And, well, I would be less surprised if somebody called for a nerf instead…

Eh? I have one maxed and nearly fully emblemed. He’s strong enough to nearly kill 3 enemy heroes and give them at least slight defense down. What do you want? Guaranteed 1 hit Kill to 3 enemies?

He’s very strong no doubt, but I feel like his defense down should be increased. Like he’s only a great hero vs minions.

And you have heroes like quenell with fast mana dealing 320% and gain 40 every time she cast her special. At average mana there’s eiora&fluffy that deals 600 to target destroy minions from target and reduce max health of all enemies by400+.

Did you go sword path? I’m just starting to emblem mine and wondering if he’s too squishy to commit to sword

Yes, went sword path. Even picking each sword nets him 836 defense and that’s without last node (another 30 def). Plus he has Paladin class, which also helps his survivability.

Here is mine. Sword + LB. Not squishy at all. 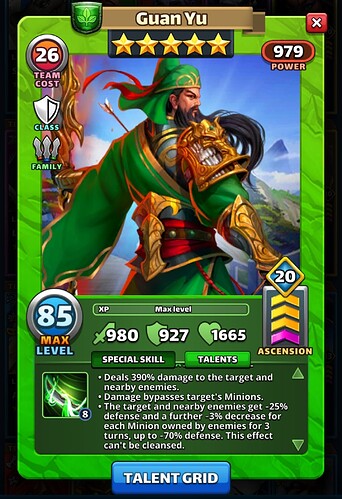 He’s good. Just think he’s missing something. Maybe give him the ability to spawn fiends to target and nearby enemies… they do no damage but absorb small amounts mana

I think, he is much better than Quennel for raid/war attack scenarios. With proper mana troops charges in 3 matches like Quennel but gives more solid immediate hit. Perfectly pairs with Evelyn and that combo nearly completely deletes 3 heroes ignoring any minions which is huge!!! Since those 3 heroes are already deleted, I am not really interested in the defence debuff but it is still nice to have…

Here is what you can expect of Guan Yu after Evelyns elemental debuff.

That’s nice! but everyone don’t have Evelyn…well I don’t.

Here you have it! This 4* green guy is easy enough to get.

I actually just started leveling that 4* . I still think guan yu should spawn low health with little or no attack fiends that steal a small amount mana from target and nearby enemies until they disappear.

I don’t think he needs much maybe increase the defense down base from 24 to 34.

Guan Yu is one of the strongest green heroes in the game.
Personally I do not think he needs a buff
I do believe that if he did receive a buff, there would be an outrage of players claiming that SG would buff him just to be greedy or something like that

Higher defence decrease would be nice, 30% base and 5% more from each minion.