🐼 Guan Yu – 5* Nature / Green from War of the Three Kingdoms

So I won some money during the week and with both this and CoK coming round decided to treat myself to the 3k gems plus mats offer from yesterday. I had some gems already sitting by but as I don’t spend much on the game and these looking like 2 great portals decided what the hell it’s extra money don’t have budgeted elsewhere so treat for me it is. 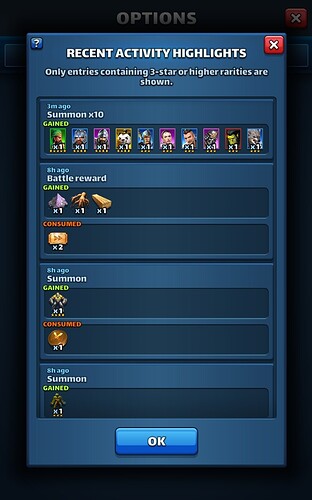 Delighted. Had expected maybe a 3 star event plus a 4 star if lucky, but to get this guy was great.

Been a lucky week all round, Zagrog on a free coins pull in Valhalla, now him today. Happy.

Needed him too as only Def down in green is CBrienne. Have to now decide if worth using tokens in Springvale for Silvara or if should hold off till autumn for the heroes I prefer in the Halloween event.

Sorry, I have just focused on the date and not the time.

@Liam_K has the correct answer:

Looks like that is copy and paste mistake @PlayForFun . Here’s the official calendar

@MrAnderson my first power level ad well. I almost limit broke him too but wanted to play with him a bit before I went that crazy lol. He looks awesome so far. Cheers! 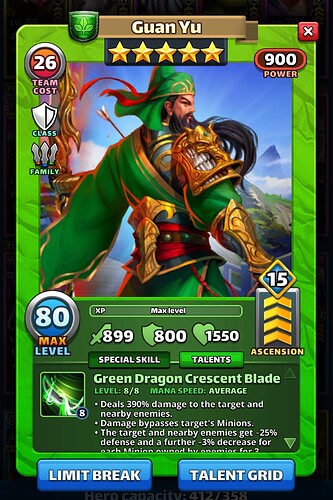 Can someone test if he can kill the opponent when bypassing minions? If that’s the case, then he will pair nicely with himself. Otherwise, other heroes will have to kill the minions first.

If that’s the case, then he will pair nicely with himself. Otherwise, other heroes will have to kill the minions first.

And viscaro, but he’s less appreciated.

I knew there was another that bypassed minions!

image1170×2532 262 KB
I was really hoping for DiaoChan but he was my 2nd pick!! Really happy to FINALLY get a Green 5* with reg Def Down… Will go really good on my D Team & my Mono Green Team!! So glad I stayed my hand with Francine & saved those Aethers!!

I have them in the same pecking order. I’m only doing a 10 pull… So I’m not counting any chickens.

That won’t work. Require too many tiles. With two or three Guan Yu, should be able to kill 3 opponents with 9 tiles

Got him & from the card, I get the feeling, he is a cousin of Quenell.

I’ve got 5 tonics and was ready to ascend Quenell next, but not sure if this guy should skip the queue since I don’t have any green 5* defence down heroes?

Personally I prefer quenell. I find Guan yu quite situational at times

I guess there is no situation where Guan Yu is bad. But comparing him to Mrs. stupid amount of damage at fast speed Quenell…. I guess she is one step ahead.

For a while ! Do not forget the shield reduction that it pronounces even if it is at 25%!

so that def down depends on the minion at the beginning of the turn or all turns ? I mean when we have this ailment and we cast minion maker skill, will it become higher def down ?

Hm nah this ailment is not dynamically changing if the opponent gets more minions after getting the ailment. That would be op I guess.
So short answer: it depends on the number of minions in one turn.

The moment you fire