Got tabbards and a tough decision

I just pulled Myztero out of my ■■■ in the tavern and got Bera as well. I’ve got the tabbards and plenty of tomes and blades.

Myztero seems like more of a trophy piece. I have Lady Loki maxed and she seems like a more effective version of him.

I’ve been hearing good things about Bera. She seems pretty nice against minion heavy teams. My last purple that I maxed was Freya. She’s a lot of fun also given that I have Puss in Boots maxed. It’s fun putting them together to create a minion madness team with other minion heroes.

Is Bera the new hotness or is there a better purple hero I have at 3/70 to max next?

I’ve been wanting to max Marie-Therese for a while but she keeps getting pushed down the queue. She would be my F- it max like I did with Snow White. That worked out very well. I raid with Snow White very often especially against buff heavy teams. She decimates against those teams.

Should I max one of these or is there a better purple coming soon that I should wait for?

Here’s the candidates for maxing out.

I haven’t been impressed with Clarissa either using her or going up against her. She doesn’t scare me at all. I went with Alfrike over her a while ago and I’m so glad I did. Alfrike’s power is worth the very slow speed. Any faster and she would be complete overpowered.

I have a purple mana troop at 29, a critical troop at 17, and another mana troop at 13, if that helps. I’ll eventually get that second mana troop to 29 as well and the level 29 troop is creeping up to level 30

Interesting. That’s not a terrible idea

To me, it seems like you have a lot of purple support heroes and not a lot of punch. So I’d go sartana.

But I’ve been super unlucky with purple pulls and have grow into my double sartana team.

I’m open to costume Sartana. But Seshat, jabberwock, and kageburado deliver quite a punch. Even Ursena with all of her emblems delivers a heavy punch

Isn’t clarissa just a purple gravemaker? They are damn near the exact same and people hate gravemaker and say he’s OP. He does fire damage and she does poison. They look 99 percent identical to me.

Nope. They are similar on pappers but:

Clarissa dot is lower than GM and that is noticiable

So , in pure damage i would take Gravie all day long.

Clarissa is more supported oriented with a smaller initial hit and a smaller dot. She on the other hand provides a more resistant body and a good +30% def against special abilities to dark.

Thats my opinion sure.

Regarding the OP. Have you tested Bera? Do you like it?
I would lean towards Bera or C.Sartana.

If you want to add a 5☆ purple healer you have a stellar one, Kunchen.

Anyways, its difficult to go wrong with such good roster. Its depending on what you lack on other colours and your playstile. If you run mono type or a 3-2

Id 100% go for Bera but may I ask your device? I’m impressed with the image quality of your printscreens.

It’s the same with all my other color troops. Going 3-2 always guarantees I’ll have a strong troop behind each hero. I rarely do mono except for a few situations.

Just a screenshot from an iPhone XS. Nothing special

Isn’t clarissa just a purple gravemaker? They are damn near the exact same and people hate gravemaker and say he’s OP. He does fire damage and she does poison. They look 99 percent identical to me.

If they were close, I wouldn’t even be asking the question. I would have maxed her a long time ago.

I would max Bera too. She seems like a good hero to put next to Freya.

I fought Miztero a couple times. His special sounds better on paper. He’s probably good on offense but in defense he’s so so.

And what a stack of great purple heroes! I wish I had a quarter of that bounty!

I went with Bera.

I’ve been making trainers in hero academy. It made maxing her out so much easier and with less ham. At least the hero academy is good for something. 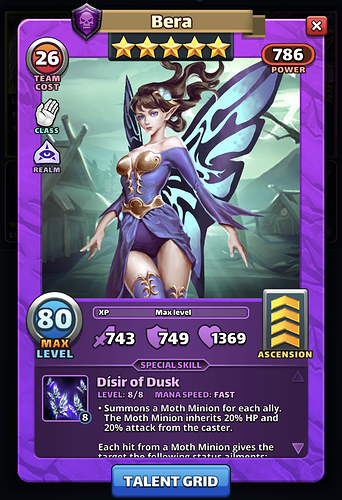 I just used Bera and Freya together with Puss in Boots for a war hit and they completely dominated a stronger team. All three are maxed but no emblems.

Those together are great offensively. I’m not sure how they would fare on defense, but the team I hit couldn’t handle the minions.

I now understand why Grimble was created. He was a bit ahead of his time, but if the game shifts towards more minion heroes, he could be very useful.

I am quite happy with my decision to max Bera. My first test drives have been very positive. I would recommend that anyone that pulled her should max her right quick.

I’d give the mats to a second Hel.

I’m not normally a fan of this hero, but… I think Noor might work really well with those 3. Really Bera and Freya are the keys there, and any other minions that Noor could trigger are just cake.

Holy ■■■■, looking at your roster does it even matter anymore? Haha

That’s what I thought, too. Most of the unmaxed heroes @wick_dawg has can be ascended and it wouldn’t be a waste of tabards. It’s a luxury he can afford since his other maxed heroes would be able to supplement what the other one may lack. It appears some of his posts do present similar issues on another element on which hero to ascend. Though Bera is a fine choice to ascend, the same can be said with costumed Sartana, Clarissa, costumed Quintus, Hel, Marie Therese, etc. With all due respect, if I had the same problem, it shouldn’t be an issue. Unfortunately for most of us, we don’t have that kind of “good” problem. Most of us suffer the lack of legendary heroes, not to mention the mats needed to ascend them, if any.