Goblin crate worth it

Do you ever see value in the goblin crate? The one I have now has 7 costume keys but I’m mostly a free player. So I’m wondering if it’s worth the money

I’m getting a lot of free costume keys from various chests/events… Love it, but also, the costume chamber only gives Classic heroes… There are some great costumes in there, 4-5* heroes, etc, but it’s a limited pool of heroes/base heroes to draw upon, even with new costumes coming. Buying it would only give you 1.4 summons, so I’d skip it…

Instead of buying 2 Goblin balloons, if you wanted to spend real world cash, wait until you have completed/nearly completed a Path of Valor to spend $10 and you’ll get a much better value… 1 Dunes, 3 Challenge, 4 Epic Hero (save for seasonal summons), 3 Epic Troop (tower events, 900 gems (up to 3 summons), a bunch of battle items/ascension/limit breaking/emblems/trainers/loot tickets/flasks more than the free path.

I’m F2P with a singular exception. If I enjoy a free game, I usually will do a one-per-lifetime $10 in game purchase as a thank you to the makers. I went with a Path of Valor for mine and it helped me get started and build up my heroes/base.

If you are mostly a free player, it’s not worth the money. 7 costume keys will only get you a summons. I think I pick up 7 costume keys in a couple of weeks just through MV and chests.

(I’ve got 13 new costume keys so far in August alone… Wanted Chests, War Chests, Mystic Vision, and I think other sources… But I also generally keep the game open and set timers so I don’t miss the mystic visions, new wanted missions, wars/titans/etc when I’m awake. Not everyone can have their Alexa tell them what to do all day.)

Where do you get wanted chests? Are those from the quests?

He means by filling the raid and monster chests, as well as any elemental chests that pop up.

(I’m a she) “Wanted Chests” are the things right below your name/avatar on your main screen… The top one usually wants you to kill 100 “Monsters” (ie the things you battle on the map or quests, not other players), the next 40 “Heroes” (ie other players via raids/tournaments), and the bottom 5 Titans. From time to time one of these chests instead becomes a Wanted Elemental Chest where it wants you to kill specific color elements (and then it gives you really good rewards). 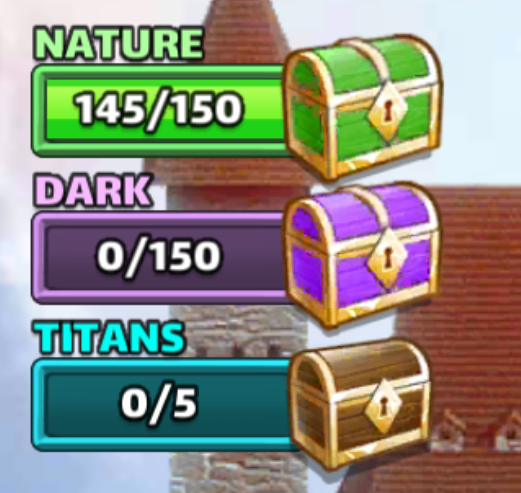 Not to be confused with Missions. Wanted Missions appear as chests in the upper lefthand corner but, to open each chest, players are required to attain a number of kills of various types. The three default wanted missions to require kills of: 100...

This fandom site describes a very big portion of the game (and then links to discussions on this forum for additional details) and should help you understand a lot of the game elements, then look to the forum for more details/discussion/opinions/strategies.

I only buy the crate if i get a solid gold chest on the first chest and it has something good I want. Other than that, I pass every time.

For a low spender the only thing I’d recommend spending on is the VIP pass. Goblin crates are garbage 95 percent of the time

I’m a spender (not whale money, not C2P either…) but I’ve yet to buy a single balloon. Not one has looked like value for money. In all the time there’s only ever been 1 4* Mat in it and it was a scope when I was stacked in scopes. It was at the end though and the other 4 bits were tat so no worth £4.50 to me. Should I ever get a D.Blade in position 1 I’d be tempted but so far a big nope everytime.

I just treat it as a bit of ham and some random ingredients when recycled now, it’s essentially just another monster chest right now.

For 7 costume keys I would not say it’s worth it.
Since the last costume event I have had 27 or 28 keys from chests and mystic visions

I just recycled one that had 3 silvers a gold/silver, and one gold on gold… And it is just not good enough.

What did i recycle… I think it as an option for emblems, epic hero tokens, or trainers… Or 3 valhalla pulls. It really is just… Minor a terrible deal… But not good enough.