Straight to the point, I collected 979 gems during the latest PoV (28-day cycle). Different numbers have been thrown around on how many gems could be collected over a given time. I wanted to see how many I would get for the effort required.

So, I collected and tabulated my data as shown in the attached graphic. I don’t believe that I will ever match this amount again, Hawthorne Effect had me striving for “my” most.

Biggest source of gems - mystic vision at 230 gems. I had to watch 135 ads, nearly 5 per day, something I won’t do again. Mystic vision also had the lowest transaction payout with about 60% yielding just one gem.

Thought I’d see more - Gems I & II quests. While there were 4x Gems I and 3x Gems II, my personal bias was that these quests happen more frequently.

Biggest anticipation letdown - elemental chests, none the last 17 days of this PoV cycle.

Your numbers will be different than mine, different titans, more or less chests/rewards collected, etc. I do think 150 - 200 gems per week (average) is a good number for me to use. 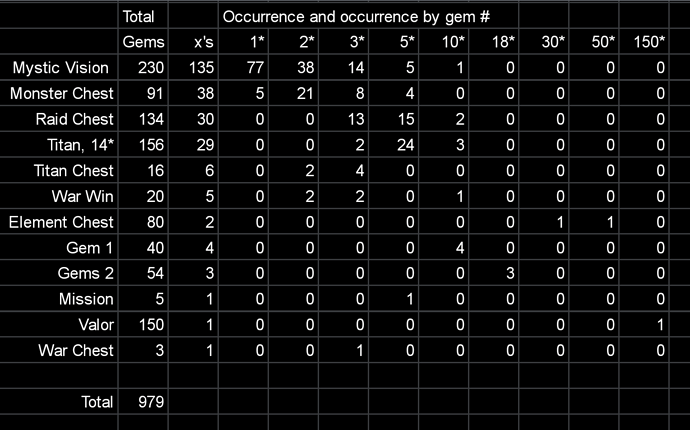 Interesting and useful insight, thanks for collecting and sharing this data.

A lot of gem skimpy mystic visions. Though I did get two like this which was nice. 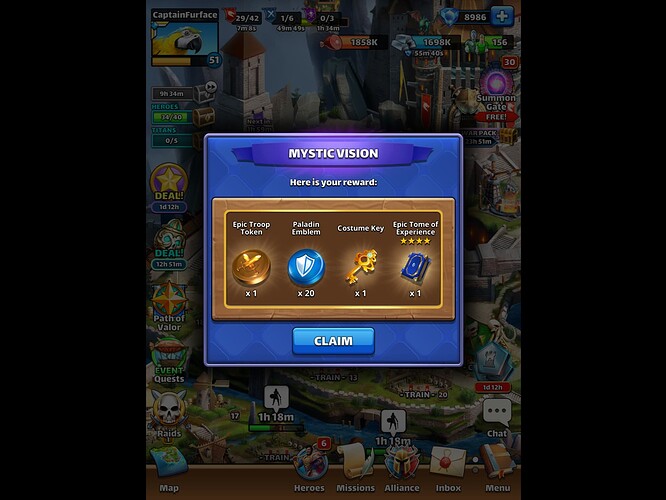 Lol… I am doing the same thing and I will finish my table in a few days. I didn’t start writing down the gems I collected at the beginning of last month, but a week later or so. Haha, what a coincidence!
I will share my table next week.

I am doing the same thing and I will finish my table in a few days.

I look forward to seeing your results.

I occasionally buy stuff… Pov… Mostly… Or vip. So i don’t really pay attention to my gems… But i go from zero to… Not a terrible amount quickly enough… But this will be a nice reference.