Game is Being NERFED to DEATH

Yeahhh. I have to agrree I’m not looking forward to adding the new heroes to my roster. It’s bad enough I’m stuck with old men and ogres like kiril and boldtusk. Yuck! Why can’t we girls have good-looking eye candy like the guys do? It’s pretty obvious the devs are mostly men…

oh c’mon, they gave you Gregorian. cheer up,
From what I hear he’s driving all the ladies wild with his masculine physique.

I think Alasie should lend some clothes to Corianne. Maybe a few warm capes!

I think the raid system is fine. And I doubt that they invest time and effort to implement things like bad boards for color stacking or Wu.

I fully agree that the level of nerfing has gone way too far. I invest much time and play like a maniac, but I cannot recall when I got the last 4* ascension item from a random drop.
Elemental chests? Only 3* items and mostly farmables. And mostly grey tokens. Titans? We fight 10*/11*, I’m usually B or A, but barely get valuable loot. War loot? A bad joke. Chests? Nothing.

Please also note this topic.
Has same direction as this one…

Are we heading to Pay2Win? Plus, other concerns General Discussion

It generally takes a lot for me to post a concern on the forums. But, here I am. And please remember, my opinions are my own and do not necessarily reflect those of Seven Days. I’m concerned. First and foremost, I’m concerned about the number of people in our community taking breaks from the game or quitting altogether. Many of these are top players… I remember posting a similar complaint about a year ago when Ascension items were way too difficult to obtain. You fixed that, and we moved pas…

Just a reminder that no pics/video from Beta are to be posted outside of Beta without SG’s consent as has been posted elsewhere on the forum.

Also, I appreciate the vehemence of your emotions, but I’m struggling to find the “constructive” criticism here. I liked the new hero Card concept; I’m looking for more suggestions on how you would change things for the better, and not mere ranting.

Richard isn’t bad on the eyes but that’s all we got. 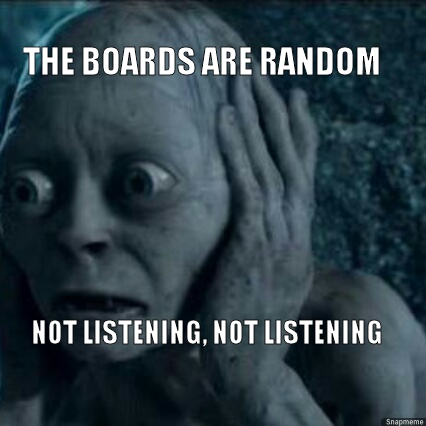 Explain the randomness of the boards. Is everything the same, no matter what heroes I am using or if I play against a 1* or 14* titan? With the right and fully leveled 5* team against a 1* titan, I can get a huge combination of tiles, but this is not possible with an unleveled 1* team.

Despite anything else nerfed/changed/slanted too far towards p2w, you’re posts are a continuing delight and reason enough to keep me logging on and staying up to date!!!

I would argue that the racoon-ewok is much more original in a game that already features several attractive female humans, even if it looks a bit comical.

I would add that while I appreciate that the art on the non-professional card is well executed, poor Jaina/Corianne has next to no support up top, and significant bunching around their nether regions. It just looks so uncomfortable…

(No wonder Jaina is so cranky, she has serious wardrobe issues.)

Edit: Makes me think of the comedy skit on youtube “What REALLY happens when you’re a hot superhero girl… :: SKIT BOX” which anyone designing female characters should check out

This nerfing will continue, new events are coming, new heroes, 10 k gems offers… And that’s all. They will get how much they can from this game and move forward. Improvements in gameplay this game won’t receive for more than 6 months. They try to implement wars but was a fiasco and show the limitation of devs one more time. From what I saw in the last time the devs and SG don’t look so far in the future, they make some changes and strategies that show us they intentions with this game.

Im new to the game and the forums, but I wanted to toss in my 2 cents…

From what I can gather, this game is going the same way as every other mobile game has…start out fun, devs realize that they can make more cash but tweaking some things, people get mad because now they dont get as much free stuff, devs come up with some new twist to keep people around, people hate the new twist, devs come up with another new twist…so on and so on.

I read these same complaints about Star Wars Force Collection 4 or 5 years ago. I read them about Kill Shot Bravo two years ago. The reality is the game will continue as long as new people are showing up and spending money. Devs like to make you think they “care” about the community, but in the end its about the bottom line. If they lose some long time “top player” they really dont care as long as the money is still flowing.

As the game continues new heros will come out. Stronger, better, cooler. Even now Im seeing people put one fully leveled 5 star in their raid defense and that 1 hero can wipe out a solid 4 star team. The game will evolve into what you have all said, Pay2Play. The casual player can play for about a month before its to a point where you are matched up with way stronger players and it just gets boring.

Bottom line… the game will lose players, the game will gain players. Some changes will be made here and there. As long as the money is flowing dont expect a massive overhaul.

Really you are right RH. The team cannot even neatly execute a new feature like AW without 1/2 the player base moaning.

What they will do with S2 when the game goes where the players clearly dont want it, who knows. With the expected gross bugs that really i do expect from SG team in production because of their cheapskate testing (my job is software lifecycle) I really expect s2 to be the deathknell of the game

You are starting to see players quit left and right as it is now monotonous. But that is really the problem with all games isn’t it? So it really comes down to if they can keep enough new players coming into the game. If they can give them enough ways to get the old heroes and “Catch Up” they will keep doing fine. It’s the old timers that will be the ones leaving though, as you can only really farm so many times before you decide enough is an enough. Season 2 would be a 3 to 4 week influx of excitement and then we will all be complaining for something else to do. Enjoy the game while it’s still enjoyable or move onto something else, life’s to short to complain.

I think when a lot of the old-times started the odds were also better. It was before a lot of the nerfing. I understand some nerfing in order to keep balance in the game and the game’s economy working in the long haul.

The same old-timers that once got their heroes with reasonable odds will of course be upset with the more recent nerfed odds.

You can only slap someone in the face so many times before they start to question why they associate with slapper.

It’s tough to keep any game interesting for years at a time and I understand the desire to keep the game economy balanced, but every time someone gets a series of awful rolls and in essences loses/wastes money they are going to question their participation in the game and start thinking of other ways they can spend their money. We lose a lot of good players this way.

Well, maybe the Finns need to call up some mangaka to get some ideas! If we get any dark magic dudes 5* that look like Yami No Matseui’s Asato Tsuzuki, I’ll be bringing my VIP status back on.

I play two other games similar to this. Legendary: Game of Heroes, and Gems of War, which is the 2nd sequel to Puzzle Quest (Love this!)… If you do get tired of E/P, there are other options.

I currently don’t plan to switch, but how are the drop rates on those?

Just go online & have a look at the cards for Season 2.
The one card only, that I posted here was removed. No wonder they don’t want anyone to see them before the release. I would be embarrassed as well.

I am a basic when it comes to graphics, but I tell you what, I could on my own home PC, with standard graphics software make cards 1,000 times better looking than what SG is going to bring out with season 2. What the hell were they thinking. "Who’s getting paid for THAT!! I asked myself…, “did they get a 5 year old to draw them & pay them with a Hawkmoon card to do it?”

So many ppl waiting for season 2, and that’s what they have to offer? omg, I was so turned off.
I felt like leaving the game right there and then.