This thread is for discussing strategy related to Fortuna, as well as your thoughts on Fortuna. 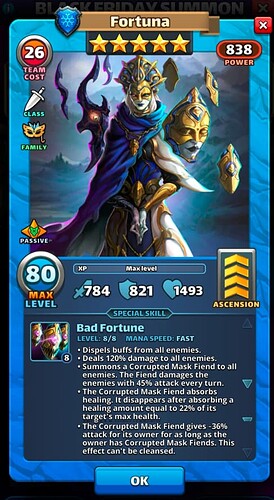 Beta Information: 🧪 Early Information on Round 1 of Masquerade Heroes [Part of The Beta Beat v52]

What do you think of Fortuna ?

This thread is for thoughts and discussion on Fortuna.

Based on preferences Forum members have expressed, please try to stick mainly to Fortuna and not wander off topic too much to other heroes.

*NOTE: Summon Results posted without any commentary/feedback at all should be flagged as Off Topic and removed, based on preferences expressed by the Forum community. Please include some comments about what you think of Fortuna when posting Summon Results. In addition to opinions about Fortuna, you are also encouraged to include how many Summons it took before receiving Fortuna (or how many Summons you’ve done without receiving Fortuna), so other players are presented with realistic experiences of the rarity of Legendary Event Hero.

Is Fortuna worth Summoning For?

How many copies of Fortuna would be useful to keep & Level?

What do you think Fortuna’s Primary Purpose is?

What do you think of Fortuna compared to other Heroes?

How does Fortuna’s Special Skill and Intended Purpose match Fortuna’s Base Stats?

Is Fortuna worth giving Rogue Emblems to?

In Defence, where do you think Fortuna is best used?

How do you think Fortuna is best used?

What do you think is Fortuna worth Limit Breaking ?

If you would emblem Fortuna then which Emblem Path would you select ?

Dispels, damages, and forces fiends down your throat? At a fast speed? Sheesh… way to “nerf” Ludwig. Sounds like Ice is the new Dark. Strong bunch of new heroes coming out from that group.

My Cleaver is sobbing in the corner….

Hopefully with m&m and this we can move away from purple tanks, I never quite got why purple seems to be so special

Wtf? This is insane, time to leave this game!

And in the first version in Beta the passive was that you could choose the hero’s element once on demand for few turns.
So you could guarantee it is charged after you see how the board looks like.

These two new Masquerade heroes on 4/80 could kill 5.2-5.3k TP teams on their own with this old passive.

I remember it. Loool I’m kinda impressed they actually tuned it down. Testing it was ridiculous.

Yes, they were so OP that you could brute force your way against everything.

Did you, by accident, write descriptions of two hero specials in one hero card?

This sounds crazy. And all at fast speed?

But who cares. Whales are gonna spend, no matter the cost.

How about Hannah hahahha

Ugh, my Cleaver is at 4.72 on his climb up…seems to be slipping, hope his belay rope holds.

Damn, short cycle now. Cleaver in my roster will probably keep his role. I have no gems at the moment and the odds of summoning are low so he won’t be dislodged from his niche in my roster…

How about Hannah hahahha

At least she’s got the looks…

Ugh, my Cleaver is at 4.72 on his climb up…seems to be slipping, hope his belay rope holds.

Damn, short cycle now. Cleaver in my roster will probably keep his role. I have no gems at the moment and the odds of summoning are low so he won’t be dislodged from his niche in my roster…

He’s still a fast fiend summoner, but he really lacks some punch. And I got Hypnos with a single coins pull, so there’s still hope!

hahah, you all writting like everyone will get their own Fortuna from black friday

Chances to pull her are slim to none!

This is the one I would want to go with my newly LB’d Ebba which I think I was too quick with. I really only have Viscaro as a minion summer. She’ll be nice in the next rush war (didn’t get her done in time for this one) but this new ice hero would go great with her!

This was exactly my first thought!

Hannah barely tickles 3 people now in comparison to this concoction. But, just for the folks at home:

And just for fun, Fortuna ALSO dispells before all of her attacks hit…

SG should introduce a new feature/ tab button named “Dustbin” where players can throw their useless heroes… At this speed of which OP cards r popping up, after 6 months that “dustbin” will be overflowing with all S1, S2, S3 5* cards​:face_with_symbols_over_mouth: