In the first thread, Rook post this at Dec '17

For the moment, ALL non-English posts are moved to the Foreign Languages category while we test having them on the Forum.

How long does the test run?
The Forum Rule about Foreign Languages are pointless to Recruitment.

Hi @zephyr1
Since the forum does not allow me to bother you in private, I will do it in public 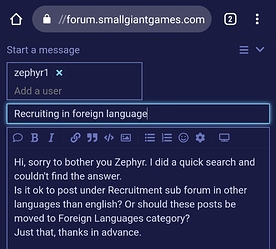 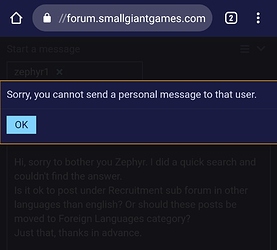 The current rule is that non-English recruiting posts go into #foreign-languages, just like any other foreign language topic.

We’ve been thinking that having a separate category for non-English recruiting posts would help people find them easier than just being lumped in with everything in #foreign-languages. We also thought about the idea of leaving them in #alliance-recruitment, but requiring that the thread title indicate the language of the post.

At this point we need to get some feedback from the staff, since either would be a change to the current rules.

So for now, they should be in #foreign-languages — but that might change.

Thanks for asking this question! I always move them into #foreign-languages, but I also always feel bad/awkward about it, since it’s pretty logical that non-English-speaking alliances would advertise themselves in whatever the alliance language is.

It’s the one obvious place where foreign language posts seem fine: if you can’t read it, you weren’t going to join that alliance anyway

but I also always feel bad/awkward about it

Well thanks for your responses. Waiting for further info then.

@Ralgert Thanks for bringing this up again!

The Moderators have discussed this with Staff again recently, but didn’t arrive at a final conclusion. I’ll raise it again with Staff tomorrow.

In the meantime, I’ve moved over a few posts from another thread where this came up recently.

I just wanted to point out that SG’s Forum Rules indicate that the language for the Forum is English. If memory serves, they added a Foreign Languages section very early on, but that did not imply service in those additional languages (it was mainly provided by volunteer players). Please see the text of their rules.

I’m pleased however that they might considering adding AR-threads in foreign languages or perhaps a foreign language AR section (which might be more helpful in keeping both sections tidy).

Has the staff said a little bit in addition?

I asked again previously, but no update…I’ll ask again.

@Ralgert I just sent a message to moderators and Staff asking to revisit this again.

You’re welcome…but unfortunately though it’s been brought up multiple times, we still haven’t arrived at taking any action to resolve it.

I’ll bring it up again now…

Ok, we have an update!

A new Forum section has been created for non-English Alliance Recruitment posts, within the Foreign Language section: #foreign-languages:foreign-language-alliance-recruitment

Good news!
Thanks @zephyr1 we’ll check it out right now.