@TGW You have never been, and never will be irrelevant here on the forum!

I can relate. Even though I have had some awesome luck recently in the game, the fact is the game is going to keep releasing heroes that - 100% realistically - you and I will never get.

I don’t want to be negative but I can’t see myself still playing the game this time next year. I am probably at, or close to, my peak as a very c2p.

It’s all downhill from getting my first challenge event 5*. Only took 2 years and 11 months.

Thank you for that.

I would like to think that I’ll still be playing this game a year from now…? Though very casually. I’ve already cut back quite a bit. I used to try to do everything all the time. Now I look at each event and look at the rewards… if it’s something that’s going to take me hours to complete and there’s nothing particularly useful in the reward loot, I pass.

I will say that I still enjoy warring. But if the day should come where I’m still running my mostly vanilla roster, and all of my war opponents are 5000+ TP monsters with 6* heroes with level 40 troops and 50 emblems…

Nope. I’m not doing that. You can just count me out.

And if I decide to permanently opt out of wars, there’s no point in continuing to level up my war bench…

Very slippery slope to me eventually quitting the game entirely.

They are all in the game already. You only see them in 5 stars. Finley, Odin, Frigg and all ninjas. And more will come in special events and you can not get any of them unless you are a big spender. Ask yourself which hotm is useful after telluria disaster.

Oh I know, many of the existing 5* heroes are already ridiculous enough as it is. And yet many still deny that power creep is real. It’s real, it’s been happening for a while now, and getting progressively worse.

The thing is, if the newest 5* heroes are already that deadly… any 6* hero would have to be even worse. And that would just be way over the line.

At least currently, I can sort of try to keep up if I color stack and get a decent board. If they continue to make all the newer heroes even stronger (which it seems they are doing), it really is only a matter of time before I won’t be able to beat any of them even with a great board.

I would agree. I have several 4* like Boldtusk and Rigard I use all the time against 5* so why not a 6*

What if the 6* had to take up 3 spaces like some of the villains you fight at the end of a level?

The main question for me is, “can I conceivably kill it?”

There are already a number of 5* heroes in the game that are quite difficult to kill without a good board. If I am to assume that a 6* hero will have probably at least 100+ higher stats as well as an even more ridiculously overpowered special skill than the 5s I’m already facing… things could get really dicey.

Elkanen 4/80 has 758 power, Krambus 4/80 has 802 power,season one heroes are like they missing a star when you compare them with Valhalla,ninja tower and any new hero in events

yeah, and the logical progression there is… 6* +20 would essentially be 7* heroes. EEK!

Note: From another discussion

5* Aethers are the new 7* ascension items since they effectively allow 7* heroes ( or at least 6.5* heroes ) when combined with emblems and Season 4 / 5 / current generation HotM

SGG is slowly turning up the heat

But when I see alliance mates who dumped their entire cache of battle items and crafting mats to stay in the top 1000 or whatever, and then get zero 3* aethers… that’s just BEGGING people to rage quit.

SGG added 3* / 4* Aethers, unlike emblems which have a single tier

All evidence points to Aethers being added as a way to make the game more grindy, increase micro transactions, and prevent new players from catching up to older players

Or just merge heroes… 2 4.80 clone heroes combine their powers and boom +100 in all stats.

Or adding a new feature: “Alpha hero” who gives some kind of boon or stack to all allies.

Here I was ready to reply with the answer of Telluria.

At least in their original form. Ah, well…

Here I was ready to reply with the answer of Telluria.

You are not wrong ( looking at you Miki )

Considering how hard it is to get past HotM, this is

Fear Of Missing Out ( freemium edition)

There was always gold in Gryphonkinght’s FIN

Create some ultra rare 6* heroes with higher gem costs to summon. Then after that gate closes for the second time, nerph them.

You mean 20 characters of Myztero?!?

It maybe too late now, as they should have done it a couple years ago.
But… you shouldn’t have to nerf a 6*

The thousand people who have one will not be enough to form any saturations on defense or offense to upset any so-called metrics.

Maybe a few spenders will complain that they can’t "compete" any more. Nothing new there… they will get flushed just like they currently are. Players will say, "It’s a 6star. It’s supposed to be strong"

Every now and then a small fish will defeat one and feel elation. The forum will be primed for “learn2play” lectures.
But for the most part, the bulk population won’t even see them.

Repeated portals and time, however…
After a couple years, there will be full teams of 6* heroes and they will be more common in the lower ranks. Balance may become monthly again at that time. So… que the 7*

Meanwhile they need to make money off the next portal. So have fun with your balance updates

That really was the Telluria issue. She was a hotm and became available to the masses. Instead of rolling out counters (Gormek and Kelile costumes had not dropped yet) as they had done for Guin (Seshat, Proteus, Kage to name a few) to allow the organic process of players growing skills and rosters to handle a new tank in a non traditional tank color, they went in the direction of soft defenses and tile mashing. This was all discussed in Let’s Go Whaling. It was disappointing because chess is more enjoyable to me than whack-a-mole. But they have only lost 70% of their players from before they did this so they must know best.
A restaurant is allowed to give you poor service, long wait times at expensive prices. The question is why do folks keep eating there?

Not to shabby but… 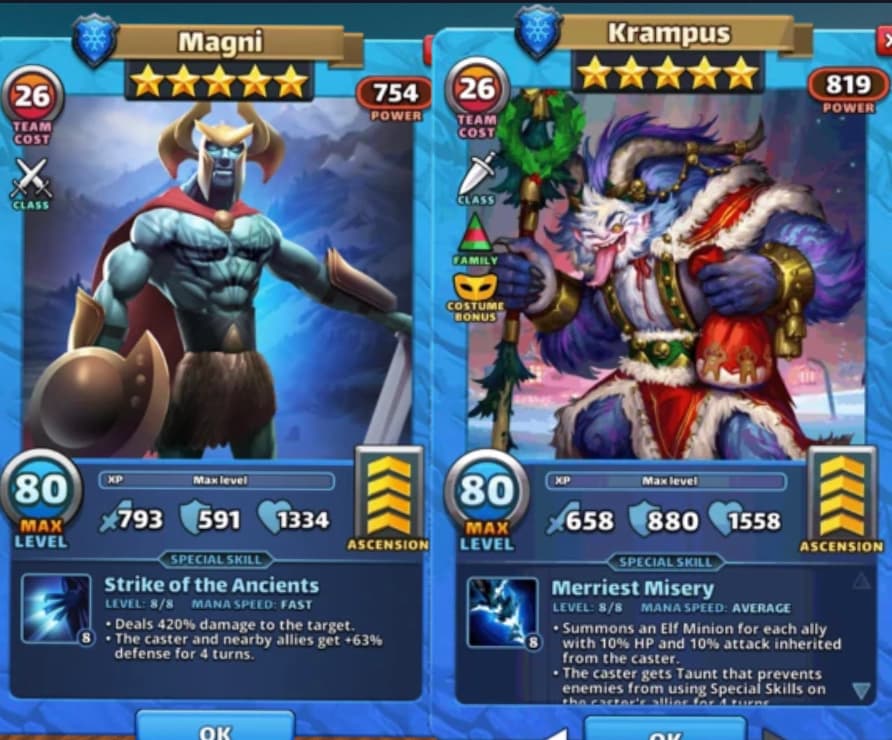 I think earlier example’s will veer farther from 7* territory