First 3 Soul Exchange picks if I had been around [Who did YOU pick?]

So I wasn’t around for the first 3 Soul Exchanges, having come back to play this game in September 2022.

But for the fun of it here’s who I would have probably picked if I was around then (and provided I had the requisite number of souls). 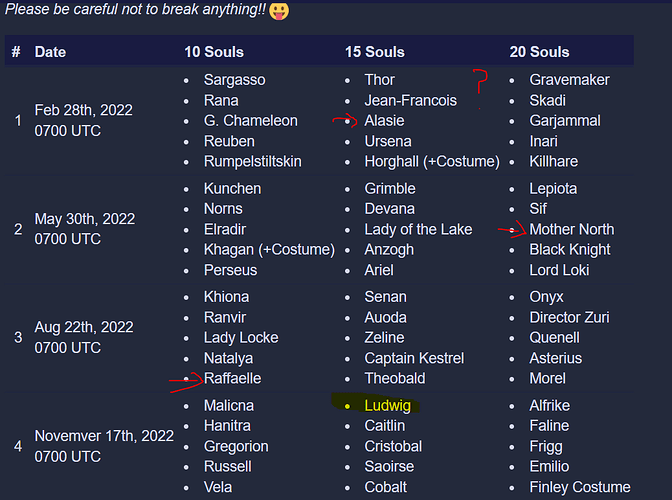 I am still not sure if I would have made a pick in the first SE but I am assuming I would have as I wouldn’t have had a clue what would be coming next or what to expect - so would have likely done it for the novelty of it (and as it would have been the first time I’d have received a “special” 5* of my own choosing).

With the full benefit of hindsight, I think it would be a mistake picking from SE1 - not that anyone could have known that at that time lol (and sorry to those who did). With the benefit of hindsight I think a PASS for SE1 was sensible, but I highly doubt I would have done that myself.

I’d be curious to hear who did y’all pick in the end and why? Cheers

Note: Just looking at the trends in the table, it appears to me that there is a good chance we are likely to see a costume of some sort in the next Feb 2023 exchange.

I hot Lord Loki
I finally saved 20 Soul Again for the next One.
I’m really excited to be able to chose a powerfull hero next month

I thought I chose more. I only got lord Loki and passed on all the others. I wanted Faline but had no emblems for her, almost pulled the trigger on Ludwig but didn’t because I really needed blue or yellow heroes.

Like always, sometimes I’m too rational and careful. That said, lord Loki is my favorite hero for sure.

Yet to level my quenell been oversaturated with greens lately.

Ludwig and Loki see the most use. Asterius gets heavily used in events and most wars.

Skadi has become very niche now and probably the one I get the least use from. Mainly just Minion wars. That said I rarely ever lose that hit but in retrospect not 20 souls worthy.

Ooooeeee I’m so excited for the next one, I can hardly contain it

Didn´t have Souls enough for the first 2, but pretending I had souls I would have picked:

I have a sufficient store of souls now though, that i’m very much ready for the next round to arrive! If for nothing else other than roster space

I’m enjoying reading everyone’s reasons for what they chose. Gives me food for thought and is a nice reminder that everyone’s roster / needs are different, and not to go with the so-called “best” choice.

I picked Natalya. Not regrets but that probably says more about my collection - she replaced one of my four stars and she was on my Wish List.

I do wish those damage over time heroes had aged better.

I so wish I had been able to get Jean F though, from the first one.

Haven’t managed to get enough souls for the other two SEs, but might be able to get to 15 this time around

Yet to use it …The first two i had about 15 heros to exchange now i have 22 to exchange so it has to be the correct hero… Somthing im going to use alot and can put emblems on and prob would like to LB … As no idea when ill have another lot to exchange …
Blue heros are out of the question as have 3 decent ones @3/70 and i have 5 scopes.
Fighter class and cleric is no no aswell as got folk waiting for them.
So yeah im a bit picky