They are going to release costumes for the rest of season 1 heroes first. And there´s Hero Academy as well (though we havent seen it in beta yet)

If the academy prooves to be anywhere close to the alchemy thing’s glorious success, I see no reason for them to hurry…

As for Gunnar well you picked up the offence half of Wilbur… Put two together and you got a full one!

As I said before… Don’t worry about down the track… Yes it could go bad like you’ve forecast… Or it could not … just wait and see… Not worth jumping up and down about now giving yourself grey hairs.

I agree with you. If Hero academy is anything like Alchemy Lab then we might expect a massive exodus.

They haven’t even done half of the season one heroes yet, and I’ve heard no reports of others in beta. Then they have to figure out their strategy for how costumes will work on other heroes. You’ve got some time to collect costumes, level, and play with them. Be more worried that as f2p or c2p you simply can’t get many costumes.

ah. like in every game today after initial impact and success, every developer team start being lazy and do moding instead coding. AND in every game playerbase riots but still playing and spending loads of cash.

why not improve tournament, why not improve wars, why no new maps, events, stages, bosses etc. why should they? its easier to make stupid costume or fill the game with countless heroes and earn much more money because thats what 90% of players wants

Magni still outperforms my other blues (Aegir, Miki, Rumplestiltskin) in most raids. Why would he suddenly be bad? Because poopy joon has a minor buff? Makes no sense. I’ve never seen the forums in such hysterics.

You really think the s01 heroes are suddenly outclassed because Quintus has a damage-down or something? Hysteria over nothing.

The problem as i see it is not in the costumes. But in the way you can get them. More pulls😡. We will have atlantis, events and now costumes each month. And with the free keys you get one maybe two pulls per month. That’s ridiculous. Costumes do bring balance to the game but i really think we need a way to farm them. Like tc20 for heroes. Maybe a tc21 for costumes. Summons/pulls are not for f2p. Training camps are.

They should just pop a costume key out of mystic vision occasionally.

Hoping for “better”, giving the benefit of the doubt there is way to much denial going rampant on this forums. But like the core mentallity of this gacha games, there is nothing you can do to change it.

I personally hate the idea of having a paywall behind updates like: buffs to bad designed heroes or old ones so they can fight the power creep. But, again this is a Gacha game normal everyday concepts like time investment, skills, community feedback will always be push away untill the last possible moment in favor of money schemes.

Useless even with spending.
The costumes are ill.

Could have been cool, if you just put a summoned costume on an already leveld hero and you were done.

You put em on fully maxed heroes and they get weak again. Now you also have to level up the dress with more items, which are already too rare.

Many expensive grind things without a sense have come. 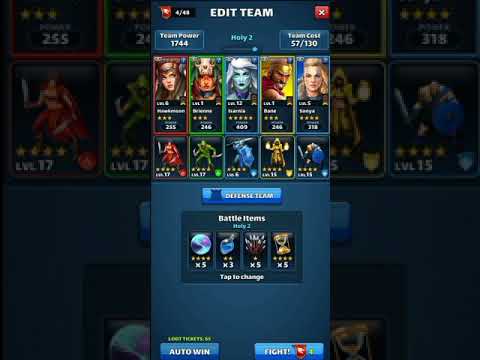 Is there an internal commitment that these upgrades won’t creep to HotM or event heroes and widen the power gap even more?*

This feature is focused on Classics to start; not off the table that they won’t see something in the future for HotM or event heroes

Direct quote^^ quote tool was having fits for some reason

Heroes 15. There are fewer Holy and Ice heroes amongst the classic Season 1 heroes than the rest. Are there plans in the works to remedy this imbalance? We probably should balance up the 4* Classics. Not against it, just low on the list. We have Season 3 and the skins, and other new development. 16. The design of new heroes seems to either be more niche or more powerful than those that preceded them. This path is not sustainable without making classic 5* heroes irrelevant. Do you have other ide…

I really hope this isn’t the case.

I’d much prefer to see them keep working on TC 20 heroes until they’re done, then either A) put costumes to rest, or B) build additional costumes for TC 20 heroes so that you can pick between two options.

The exception to this is if there’s some season three tie in with new buildable heroes and hero academy (No six stars!!).

You get stat boost with each costume applied. So maybe when Aegir gets a costume, Lianna can get a second costume (Candy Striper?) to keep up.

Yeah when I read that back in March and ran that through my personal political bull#### translator it came out as “It’s pencilled in for late 2020 on the development roadmap.”

Now I don’t know if my cynicism is driven by a total lack of trust in anyone who refuses to rule somthing out when directly pressed on the issue or on how little faith I have that SGG won’t opt for short-term profits over long-term game balance but still the result is the same. I wouldn’t be betting anything on them not eventually introducing costumes for HOTM or event heroes.

Whether I’m still playing then to see it I don’t know but I’ve no intention to essentially re-pull for the costumes of HOTM or event heroes I’ve got already so if I am still playing by then it will be the point when I will part ways with the game. I am however under no delusions that matters to SGG at all given the money they chuck at recruiting new players to replace those leaving.

Useless even with spending.
The costumes are ill.

Could have been cool, if you just put a summoned costume on an already leveld hero and you were done.

You put em on fully maxed heroes and they get weak again. Now you also have to level up the dress with more items, which are already too rare.

I disagree on the “levelling again” part. Yes, it takes a considerable amount of feeders and food. However, for very advanced players this means that they at least have got something to do again. And the ascension item cost is almost negligible.

In my eyes, the real problem isn’t the feeders, food and ascension items but the paywall that makes costumes unattractive. If the costume is at least somewhat useful, I happily take the 40 % extra XP to get the altered special + the stat boost. The real problem is that apart from a few keys from the quest you have to pay gems to get 3* costumes most of the time and even if you are lucky enough to get a 5* costume, you might not even be able to use it…

I’d rather have an increased XP cost and even slightly more ascension items to spend on the costume if (and only if) they could be obtained by active playing and not almost only by wasting gems/money (which most players need for other things, many of us still lack Proteus and/or Wilbur; many of us want to have at least one or two special defense debuffers and rather try to get Guardian Jackal and Falcon; etc.)

Oh, and as for spenders: Due to the high XP amount duplicate costumes give, levelling isn’t a big deal anyway

Melendor and Rigard’s costumes look worthwhile, creating almost a different hero. The change of class may also attract some players …

I always thought that the costume feature was released for the classic TC20 heroes only, so that they become a little bit stronger than their current versions, or am I missing something?

Even without costumes for HOTM, it is already a final blow to TC20…

If costume were intended to make TC20 relevant, it has the opposite effect.

With only 6 free costume keys in a month, it will take more than 2 years for F2P to get a single 5☆ costume on average.

I am utterly dissapointed with this feature.

How does it change any aspect of the game tho? What I’m hearing this thread say bluntly:

Honestly, what did people think the costumes would be? Freely handed out only to players who spent less than xyz dollars? Indiscriminately put to all players?

I have to disagree with this one today.

F2P have always play on different level but it increase the gap on that level.

I am not talking about becoming the winner, but finishing in top 1% of 3☆ event will be harder for F2P now that it is hard for them to get the stat bonus.

Isn’t one member of 7DD family is an F2P?

How? What does it change? its just a new hero… If you get it, you can use it… if you don’t then you still use the heroes you have…?

However with costume introduction, you can have the same exact heroes with extra 5% attack, 5% defense, 10% HP, and 5% mana regen.

So F2P can have normal Lianna, but P2W will have Lianna with the same skill but with extra 5% attack, 5% defense, 10% HP, and 5% mana regen. (You don’t need to use the costume to get the bonus as long as you have the maxed costume).

Honestly, what did people think the costumes would be? Freely handed out only to players who spent less than xyz dollars? Indiscriminately put to all players?

Do you think F in F2P as asking for free hand out? NO. We grind, we spend extra effort to make our team. I am not asking for a free hand out, I am simply asking for a way to grind it out, just like classic 5☆ heroes can be trained from camp.

It would be different if there is a building that can produce costume.