Couldn’t really afford a ton of emblems on either right away.

Both solid snipers so it’s about numbers. Lepus has a lot more direct pop and hits heros next to the target. Even with the lower defense after the hit I thimk he’s better. Fenrir is better for the finishing blow which most likely Lepus would kill anyways. 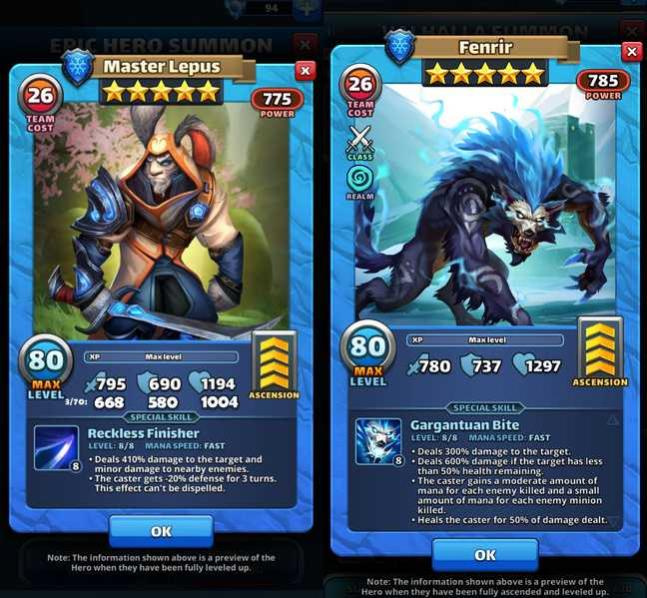 Higher attack stat than Fenrir (So better for titans & tile damage). Plus does more Base-Damage than Fenrir does at 410% vs. 300%…

A consideration you’ll have to make is class’s… Lepus is Druid vs Fenrir at Fighter class.

A consideration you’ll have to make is class’s… Lepus is Druid vs Fenrir at Fighter class.

I was leaning towards Lepus- But the fact that I don’t have free emblems for either one makes me consider Fenrir more.

My reasoning is that Fenrir doesn’t need them that much- His normal special won’t hit hard either way, and his bonus special is way more than enough even at base.

For what it’s worth you have available the BEST 1-2 punch in the game to you.

Athena + Master Lepus will kill 3x enemies most of the time… Toss in Frida and it’s guaranteed.

I have almost the exact same situation - the same maxed 5s, and just a few other 3.70 options, most notably Alasie. Just waiting on one more scope, but I have every intention of giving them to Lepus.

Athena + Master Lepus will kill 3x enemies most of the time… Toss in Frida and it’s guaranteed.

This. I have this setup. Fire Frida first, then Athena (or either way), and Lepus deals the death blow to the target and nearby.

I have Fenrir and often find myself in a weird place where I can not fire him immediately because none of the enemies is under the 50% threshold and otherwise his hit is mediocre. It’s less than ideal.

Lepus I guess doesn’t care (though I myself don’t have him).

But your name is Suicide_Bunny, how can you not have Lepus???

Ask the RNGesus. I do have Killhare for what’s it worth.

Nah Killhare is more like the TK bunny since she makes her teammates suicide themselves. Lepus is the true suicide bunny in every sense of the word (ok maybe kamikaze bunny is a more accurate description).

As a long time user of Lepus I have emblemed him; I love him and use him all the time

Goes great with Kiril Frida Lepus combo. And the drawback doesn’t matter if all the enemy is dead already

I only have Lepus, and not Fenrir. with my limited roster, he combos insanely well with the likes of Kiril, Nordri, Isarnia (Grimm before I ascended Issy), and was on my 116k+ Titan team (only a 3* Titan, or was it 2*?, but still) with Wu.

And even with the defense drawback? sturdy enough to survive slash hits from the remaining heroes. You know, the ones his special doesn’t murder

if timed and aimed right, can easily finish off 3 heroes.