How did your war go? This was a nail biter! Both alliances used all flags and it was decided by 40 points in the last 15 minutes 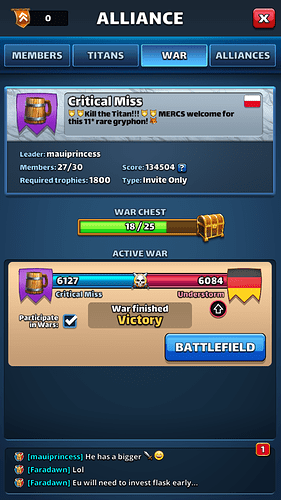 We had a great war, too bad we lost!

We fought an alliance who used the “save all your flags till later straegy”. We cleared their board twice in the first round and we were 3300 points ahead of them.

The waited patiently, came on at the same time and cleared our board three times. Both alliances have 30 members so it was quite amazing to watch them. These were the highest scores we’ve ever seen. They had 5140 to our 4912. We had 3 flags left, they had 1.

We did have members who had bad battles and bad boards so conceivably we could have won. No one was upset at the end though.

We had a worthy opponent and they won. No shame in that!

EDIT: one of our members was able to translate our opponent’s banner. They said they set two records, congratulated everyone and were so excited about their victory. Makes if all worthwhile when we read that

we were on a 4 war win streak and just got our wake up call Match. we had 3 teams of 4k they had 10 teams of 4k and 5 at 3900. through the diversity we were able to come together and flip the board once so was very proud of our alliance mates. on to the next one :).

We hit our all time high in war, 5744 points. Strategy and teamwork pays off. 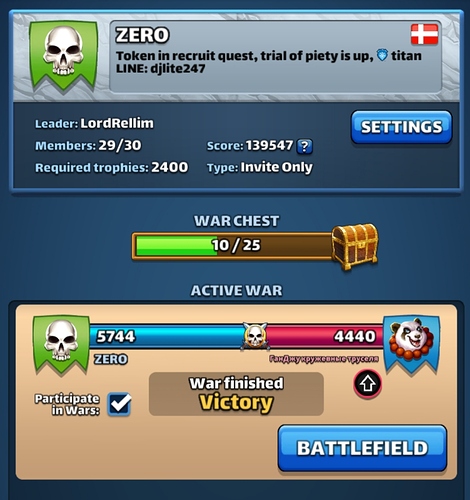 Unfortunately opponent gave up and left 30 flags in, making the war less exciting.

But our opponents were super organised, and I was almost cheering them on for their dedication. It was very close and a nail biter finish

We did our first coordinated attack, with 3 hrs to go.
Lots of us had six flags.
Reset the board,
Won the war.

It was a giant leap in our alliance as we had been very free form before.
I assume it will get harder as we win more.

Both sides used all their flags. Our last attack was with time expiring. We needed a 1 shot to win, and our last flag had a 3200 cleanup team… still got 3 of the 5 with the other 2 hurt. It was intense but we had fun. We will get the next one 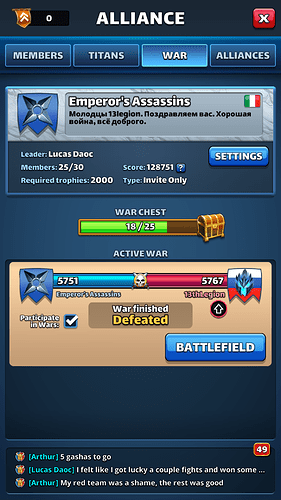 We are not going for board reset on weekend wars, and because neither are our opponents (in like 90-95% wars) we often end up by pretty close score like this one:

The chat is very lively in last few hours before the end, everyone cheering and shouting, awesome moments, especially when the war is ended with victory. The only thing missing is a way to replay others battles, that would be so cool!

We use Du Recorder, and when we are battling an alliance where we know some of the members we set up a Line group and share battle videos and some good-natured joking around back and forth.

Shout out to Elite Force! We lost miserably, but your good sportsmanship and humor made it fun for everyone!

Congrats on your victory @Dwimmerlaik ! Love the close ones!

We scored 4505 and won by around 400. Was our top war score so far, so pretty excited about that. Our team has 30 active members and no turnover, so it’s good to track our progress as a team.

We are quite unorganized and always have many many unused flags. About 10 active members are chatting like fools and we have lots of fun, even if we concede a defeat… Nevertheless we manage to win 2 out of 3 somehow…

I sincerely congrats to them as they made me sweat for a moment.

Also 40 points in the last 15 minutes. Sadly, we came out on the wrong side of ours. Unlike your war, we had a player on vacation in Vegas whose last three flags sat idle.

Matchmaking seems to be greatly improved over when I started. A lot of our wars come out this way.

It was a good war. We picked up a number of new alliance members early last week, and they’re really starting to gel now and work well with our war plan.

We just won the war in my second account by using all flags and first time we achieved more than 3500 Points! 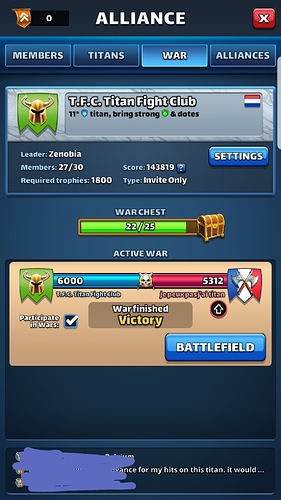 Thanks for kicking off such a fun thread @SWEG! It’s really neat to see how people’s wars have gone (in a context other than discussing the matching algorithm).

They were well ahead of us. But we pulled out about 1900 points in just under 2 hours of fighting. Had one member forget war was on so we could have pulled out a bit more had those been used.

Had several members attacking well above their team power by stacking (and winning) which was a first for them.

It reminds me … Our Team.