Everybody Gets Bad Boards

I never get bad boards when I play in my foil suit.

Thank you I’ll try anything right now as I’m getting to the point where I am about to walk out on the game. The fact that I don’t get at least 9 tiles of my strong color on my starting board all perfectly lined up below the tank in every single one of my matches makes it is clear that the board is rigged against me. Anyone who can’t see it as clearly as I can is both blind and naive and foolish and an SG fanboy 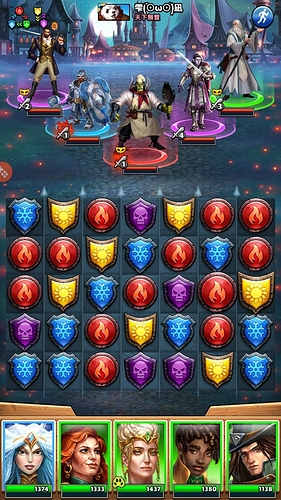 Lol…green team to a red tank? I mean…I understand it’s a no blue tournament but that’s still going to hurt.

Oh wait…that’s not even a tournament…I see your Ariel. It’s just a terrible team selection compounded by a bad board.

I finally won the match.
For me Boldstuk is traush as tank in diamond.

But the case is, 0 green tiles. Absurd.

I have felt worst boards lastly, but this…

We all get bad starts. That’s the game.

We also get amazing starts on occasion too.

But as you’ve already confirmed you won the match so Green tiles must have come.

But seriously even though you have a team of 5* against one assumes is 20 emblem 4* you went with an off-colour raid team. Against a better team you’ll be up against it. Would you take that team to a highly emblemed Black Knight tank for example?

Absolutely not.
With BK I have my blue heroes ready.
I usually use mono green or 3 green + Ariel and CMagni. For me is the more confiable team.

Damn you SG, first for giving me the bad board, then for taking away my right to complain about it!

In fairness, that’s hardly a bad board when you have purple heroes. You got lucky with the purple tiles after your first match to get the diamond. After that you got a lot of cascades that were full of red and purple tiles and tons of diamonds.

I know you were joking, but these types of videos are frustrating to people who get a bad starting board and never get the tiles like you got.

Actualy I decided to go with it because it looked just like a lot of screenshots I saw where people were complanining about their bad boards, where their 3-stack was like mine but their off-color was flourishing…

This whole topic is frustrating because roughly 90%-95% of boards are winnable, with the right team vs opponent selection and playing the boards right

This whole topic is frustrating because roughly 90%-95% of boards are winnable, with the right team vs opponent selection and playing the boards right

I disagree on that percentage. I’ve gotten lots of boards which were full of dead tiles (3-1-1 team), so the chances of completely dead tiles is actually minimal, but those types of boards occur. To say that 90-95% of the boards are winnable is not realistic from my experience. I run various very fast heroes with mana troop so all I need are 2 matches. Lots of times, they never go off simply because the tiles were never there to make matches, i.e. no replacement tiles of those colors.

I disagree with your disagreement.

So many people are winning 80-90% of their raids on average. I frequently have runs of 10, 15, 20 raid wins in a row (had one that ended yesterday at 27). If people can win 80-90% on average then the winnable ones must be at least slightly above that.

So many people are winning 80-90% of their raids on average.

Who are the so many people? Just the vocal ones in this thread who talk about having a high raid percentage win? Do you think they are really representative of the whole player base?

You are missing the point. A good number of people are getting high win rates. They arent cherry picking targets weak targets. But they are intelligently matching their heroes and playing smartly and winning consistently. Therefore that win rate plus a bit more sets the bar for the maximum winnable boards (as nobody plays perfectly). Am I saying that’s the majority? Not necessarily, because skill plays a huge part, and the majority may not have the skills required

I know that, but if you put 2 Red héroes because the tank is Green, it’s the same. You can’t use your Red atacks because you haven’t Red colour in your board. And if this is in only one battle, it’s allright, but in 6 battle? Is a very bad thing

The same numbers of the other colour. Because I know that if I chose only one colour heroes, I can lose because It’s a high risk option.But it’s the same if you have to win to a Green tank and you have 2 Red héroes.You can’t use your Red atacks because there isn’t Red in your board

Do 10-20 raids with a stack of 3 red heroes. Count how many red tiles are there at the start of every board. Let us know the result…

Getting bad boards from time to time is something that everybody can accept. It is part of the game. But when bad boards are becoming such an issue that your entyre ally comes on the brink of quiting the game alltogether because its not fun anymore than it becomes an other matter. Our complete ally is nearing this situation (the first has already quit the game) because of this issue combined with the facts that we constantly lose wars because we are matched to upposing teams that are on average 300 xp heavier than ours, with means that this combined with continuing bad boards become a real frustration. The same plays with raids, events en tournaments. When you are out of it every second day for months in a rowe while having really strong teams, then you reach the moment you give up. If one says that all this is simply a question of bad luck, than our ally does’nt beleve in that anymore and that is sad because we have had much fun with it in the past years.

Super tired of less powerful or equal teams laying a beating on 3 of my attacking teams. This isn’t right and it makes me want to play the game less. Of course I am talking about the alliance wars but also in general.