Yeah my luck is so impressive that I have Sabina (got Rigard also purple healer) and Grimm (got Sonya also blue attacker), besides Gormek… and Magni really compensated but I have Perseus =~~ needed red purple or yellow 5*

The RNG gods are fickle. By contrast to the video (blech) I had astoundingly good luck. I did 43 pulls and got all event heroes (Arthur, Guinevere, Morgan, Merlin x2, Lancelot x3), Natalya, Sartana, and Leonides.

Kerridoc, maybe SG has enabled the good luck flag for you.

(there was a thread about the ‘bad luck flag’.)

Hi. I’m a fan of Empires & Puzzles RPG. I’m not much of a gamer, I had played some Bejeweled on PC & Android devices in the past. I also really enjoyed the later two Zelda games on original Wii. However I’m the type who plays and beats games and I’m content. I may not play these, or any games again for years later. I haven’t played any type of games in about two or three years now…, until now.

My brother who recommended me to give Empires & Puzzles a try, so with this incentive I installed it and kept continuing to play it up until this very day. I truly believe this game brought us even closer, with finally a shared interest. It’s only been one month, and week since I’ve started playing Empires & Puzzles. All my brother and I talks about now, is Empires & Puzzles, so I’m truly appreciative to the Small Giant Games company, and Thank you!

Last month, I’ve managed to get 4x5 Star Heroes. I could not even once get a Hero of the month exclusive! Yet my brother gets two of the Perseus heroes almost back-to-back.

Each time I’ve done a ’ SUMMON x 10 ’ press, I received back-to-back same heroes, and every other one being giving the same heroes. No 5 star heroes! No Exclusive Hero like Natalya. Just the same few heroes giving like bunch of Gunnars, Graymanes, Sonyas, Valens, Ulmers, and Karils! And three Grimms. I had all these, and it sucks not to have received something good and different. Not even a single 5 star hero and not get an exclusive hero yet again. However my brother right off the bat, receives two of the Natalya hero, this month. Shortly after he receives yet ANOTHER TWO Natalya! Talk about how lucky he is, and talk about how unlucky I am! My brother doesn’t get shocked too easily, however he was certainly when he seen my Hero roster of a bunch multiple heroes and consisting of ONLY Gunnars, Graymanes, Sonyas, Valens, Ulmers for all those ’ SUMMON x 10 ’ spins and remainder with ’ SUMMON ’ - 300GEMs spins. Really made me sick, and despite Small Giant Games believes this to be fair. I certainly do not for even a split second! Would anyone?!?!

Considering how terrible things had went, I wasn’t planning on spending any substantial amount, almost little to none for certainly awhile. Last several hours of the Knights of Avalon event, I decided to try my hand once more. Bought 2x 2800 Barrel of Gems (Empires & Puzzles: RPG Quest), and 4x 1.39 CAD Challenge Offers.

My first ’ SUMMON x 10 ’ spin, I received no 5 Star heroes, and really nothing much. My second ’ SUMMON x 10 ’ spin I’ve received shockingly, two featured heroes, one being a 5 Star hero! Morgan Le Fay, and Sir Lancelot. The remainder of gems went on ’ SUMMON ’ 300 Gems spins, and nothing much from those. Yet still without a hero of the month exclusive hero, which I really was wishing I would have received!

Received Morgan Le Fay, and Sir Lancelot. This made me happy, but doesn’t make up for what has happened to me.

Wishing everyone better luck than I had! Really do!

P.S: By the way, brother and I, would like it very much if we could trade heroes among each other. It’s a feature we hope, one day Small Giant Games would implement. To change heroes he doesn’t care much for with heroes I don’t care much for.

SG doesn’t intend to add a trade feature at this time (see Shortlist for their future plans).

I certainly wish you better luck! (I do single pulls because I can’t do x10. I wonder if that would result differently for you? I know the Epic and Elemental work differently for me.). Anyway, GOOD LUCK!

I did less, but still tens of thousands of gems. Got no 5* event heroes. Not even Natalya. Not a single new 5* as I have almost all the regulars, at least those I want.

It is ridiculous if I have to spend 1000€+ every time I want a certain new 5* hero. Especially because they won’t matter much anyway. A lot of people are capped at power already. And devs think they can just pull tons of money from new hero lotteries.

I’m done with this game for now. They are too greedy, now they get nothing… 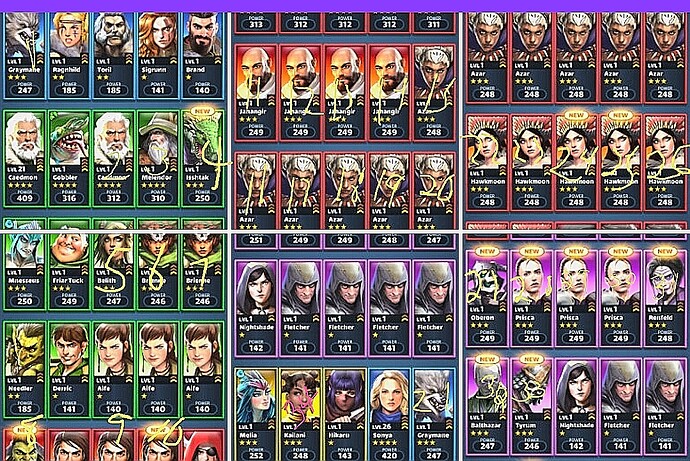 IMG_20181002_1748381080×723 623 KB
Haven’t drawn a 5 star besides on a bonus draw which was khiona. I’ve spent 600 dollars on this game now and I’m over it. I play with friends and after I draw all these disappointments my friends do a single pull elemental and get the bonus draw Aegir and decides to do another one and received Sartana. They have spent less than me and have 10+ 5* heroes. This is not a luck thing. I believe these accounts are rigged to do this in hoping to get ppl like me to spend more. I’m so over this crap and only been playing for 2 months if that. Seriously this is the biggest rip off I’ve ever experienced. I might delete this scam of a game but after having invested 500+ dollars in it, it’s hard to do.
2 Likes
Fira October 2, 2018, 11:40pm #30

So small giant hate you so much, they deliberately give you lower drop rates than everyone else, but also know exactly who your friends are and their account info just to mess with you by bumping up their drop rates and giving them hotm because you want it?

You realise everyone wants hotm? It’s not like they’re giving it to someone who doesn’t want it…

Thinking about it now, you’re probably right. They’ve probably hacked your phone and have control of your selfie camera so they can see your disappointment as you pull, and they’re like “omg look at his face guys. He’s pulling again lol”

Everyone’s had bad luck at the summon portal and been annoyed by it. It is gambling! I’m summoning less each time now Cos at the end of the day, if I’m not ok with only getting renfield for my gems, then I shouldn’t risk it. (Renfield always ruins my day with his smug bastard face)

Yes I realize everyone does want better heroes, and I do spend the money knowing I’ll be feeding most of what I draw to my ascending heroes. That I do accept. What I’m saying is that for each separate account I believe they have to have some thing in place for some ppl to receive better luck than others. Seriously we have drawn at the same time numerous times now and my buddy and his girlfriend have done night to day better than I have. My buddy has 12 different 5* and his girlfriend has 10 5* heroes compared to my 1 5* which was a bonus draw hero of the month. How is that even possible? It makes my stomach sick thinking about these odds and then seeing my friends pull so many and I don’t get squat. So what’s really going on on here? I call b.s.

I understand your rage, I’ve been there. But trust me, 2 months of play is too little time to get mad. I suggest you establish a budget per month and slow down.
If you really want to become a top player in 3 months prepare to spend $5000 per month like some here did! The odds are shown all the way here in the forum. I have now 43 5* heroes. 10 maxed, 7 on 3/70 and the others all unleveled 1/1. I started on Sept 2017 and I just got a rainbow 5* team on March 2018. It means one 5* of each color.
I say there’s nothing wrong with your account. Maybe your friends were luckier, maybe they spent more than ou know, maybe this maybe that. The game is different for each player. My friend got Lianna + Zeline on one summon! I never got that. But I play my own game, don’t let theirs influence you. I suppose that with 2 months you’re not even close to ascending a 5* hero, and I’m not even talking about mats, you don’t have training camps and enough world energy to generate so many feeders and would take til 2019 to max a 5* anyway!
Follow the rhythm of the game, this is not a fast game, not a “pay and take it all” game and most important, nothing you pay gives you any guarantee. You can’t just buy the heroes you want. Maybe you buy some materials but you’re not there yet.

Don’t worry about what other people get worry about building your own team first. Even if you do get a 5* you’ll still be nowhere close to leveling it to max. Best thing to do now is build your 3* and 4* teams to max so you can obtain the ascension items from the rare quests, titans, and event finishing.

@Kingarthur79 That is really rough luck.
Reading this thread might give you some insight as a new player, so you can set your expectations accordingly and learn a whole bunch while you’re at it.

Advice for New Players, or "All the things I wish someone had told me when I first started." Player Guides

I see lots of posts here from newer players expressing many of the same frustrations I felt when I first started playing. After nearly a year, I’ve learned a few things, and I’d like to pass them on to hopefully save others from these frustrations. Progress is designed to be slow whether you spend money or not. You can buy gems to summon every hero in the game, but you can’t buy enough ascension materials to level them all up. You have to earn those through game play, for the most part. You do…