Yeah I agree that making that change would make her better, bit of a flawed design. But keep in mind the current HotM fiend immunity is only to their own element (not all allies). When the family bonus comes out, it’s also conditional in the sense you need to carry at least two 2022 HotM to provide immunity to all allies. I don’t think there’s any hero that just provides unconditional immunity to fiends to all allies.

i agree, but at least now her overheal is very high making up for it in my opinion. she is usable outside the fiend having fiend summoner restriction

That’s fair enough but her heal is fixed & what I mean by that is if she’s healing a 3* hero or a new hero then that 650 boosted health works out at an approx. 65%-75% heal but to a fully levelled, emblemed & LB’d 5* hero they heal for the exact same 650 boosted health but now it’s only a 32% boosted heal (the % are approx!) Whereas normal healing scales with higher figures so a 40% heal at the start of a hero being levelled won’t be as high as the same % heal once the hero is fully kitted out.

I still stand by that she’ll always be a 5* hawkmoon outside of fiends. Having overheal has made her slightly better, but not that much.

@PlayForFun change Esme’s picture? that is the old card

Can you share an image of her hero card ?

It doesn’t matter if she has emblems or LB.

I don’t have her card, someone else has to share it

There you go, 20 chars of Esme, sorry not fully maxed. Working on her 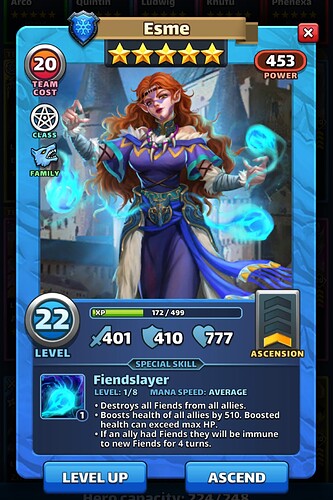 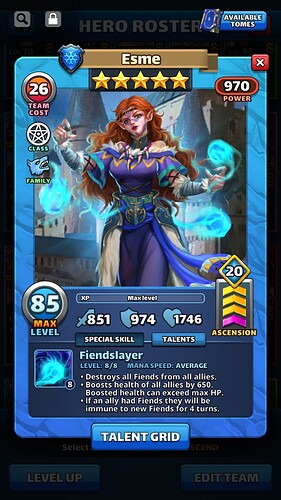 Hmm, the color of this screenshot is a bit off from the image in the OP so I could not just replace the special skill part.
Also it is different in size, and after resize it does not look pretty

What about Gaillard? He gives 4 turn immunity at fast speed.

If she’s at the next soul exchange for 15 I will snap her up, but if it’s for 20 I will have to think hard about it (somehow I don’t think she’d be valued at 20)

I have her and love her to bits.

i love her too
the buff she got is great

Not sure where I read it, but Esme has amazing synergy with Triton (since his healing boost also applies to overhealing).

Esme is my first love

. I liked her even when she was just healer without boosting but with boosting she is amazing. In this era full with fiend heroes she is shining. True, she would be better if she had dispelling od cleaning skills but she is great as she is

All they needed to do was give her fiend immunity irregardless of whether a hero has fiends or not. That’s the only gripe I have about her & it’s not a huge change in the grand scheme of things but wud make a huge difference to our fiend countering abilities. I can see the issue now, Hannah fires, 3 fiends on the board & Liz is going to fire soon, but not that soon. Can’t leave Hannah’s fiends on the board giving reduced attack no matter what I do (excellent ailment BTW, great for negating berserker). Do I wait for Liz & take them all out at the same time or take them out now but only give immunity to 3x giving the other 2x Liz’s fiends. Not a great scenario. The boosted health change was needed ‘BUT’ it stays at that specific amount whereas % healing increases with the hero. For example a hero with 100,000 health wud still only receive 650 boosted health but a % healer like Zuri would heal for 65% + 42 to the rest but my point is it scales with power. It’s not an issue now but as heroes become more & more powerful that boosted health that seemed very decent at 1 time now seems meagre compared to % healing. A % based boosted health is the next step to giving heroes a bit more longevity but there lies the crux !! Are the devs REALLY going to make heroes in a way that gives them the skills to age gracefully & stay relevant ?? Think I’ve just answers & made my own point right there !!! Just to finish off the fiends that r about makes Esme even more desirable today !!! Just give her unconditional fiend immunity !!!

Agree. She’s now my go-to healer when survivability is needed (ie. Styx). Not many heroes restore 650HP no matter what at average speed and with overheal. That fiend-blocker is just a bonus, though indeed it would make her better if she applied it all the time (and Eloise applied always minion blocker).