Emblems to Ameonna or Cheshire Cat?

Yes, I can hear your groans already but hear me out

I’ve read all of the threads on these heroes, but none seem to address this specific issue. I have Sabina at +18 and still have a few hundred sorcerer emblems sitting about. I feel I should give them to either Cheshire Cat or Ameonna and then reset when I have better options. The problem is I use both on Titans and they do their job there very well, but I don’t like using either one anywhere else (though i’m Usually forced to use both in wars). So which one do I choose? On the one hand, Ameonna could have an even crazier attack stat. On the other, maybe if I emblem up CC maybe I’ll start finding other uses for “it.”

Give me your wisdom, oh great gamers!

Edited to add: we kill 8 star titans with the occasional 9

I want a cat bad! I like random! Being iv never played with him I can’t judge on if he’s worth giving too!
I do have amennoa I gave her emblems she is awesome! Went full attack with her! This is mine 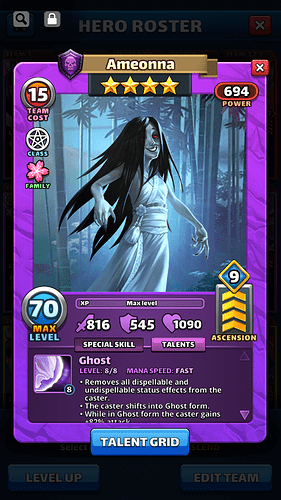 Aemmona has the highest attack stat out of all 4* heroes, so if you pump her with attack she can potentially reach 900+ in that stat. That will be useful for titans which is what you use her for.

The Cheshire Cat is much more useful than Ameonna, imho. The DoT of an emblemed Cat is lethal, especially in 4* tournaments. CC is also great for yellow titans.

The only good thing about Ameonna is her attack stat. But at some point you’ll replace her with a 5* hero against titans so she will only find use in AW. She’ll also be too squishy to survive against 10*+ titans. CC, on the other hand won’t be replaced on titans as there are no other purple heroes who reduce the regular defence by -44%.

The only good thing about Ameonna is her attack stat. But at some point you’ll replace her with a 5* hero against titans so she will only find use in AW. She’ll also be too squishy to survive against 10*+ titans.

I use Ameonna on 10-13* Titans for her high Attack stat. She’s actually useful for survival, since when she’s active it’s equivalent to a 20% blind on the Titan, since it can still target her and do no damage.

She also contributes to the stack even if she dies, so the only downside is losing her buff and aid to survival.

I haven’t felt any reason to replace her with a 5* so far.

I’m giving her Emblems now, prioritizing Attack all the way. She joins Attack-oriented Sabina and Attack-oriented Proteus on that team, along with Wilbur and Ranvir. So almost all 4* — because they beat out the attack stats on my 5* (Seshat and Thoth-Amun), and have more useful Special Skills for Titans to boot.

-44% defense at fast speed will keep him on titans for long to come.
Can start finding a use for him in war too, his shuffle is good for grouping targets after thanks dead for hit 3 hero’s - like Proteus.

His stats are really solid for a 4* and only improve with emblems.

I’m curious why you aren’t taking sabina to +20?

CC +1. Will be interesting to play CC with Jabberwock if lucky enough to pull.

I haven’t taken any past 18. The consensus seemed to be that it wasn’t worth it to go past that, but I haven’t done any analysis myself. Do you take yours to 20?

I have takem Wilbur to 20. Jackal and Falcon will get there soon.

Okay, I will check again. Thanks!

I do not have them . . . Yet. Amazed that people seem to find enough food to level heroes. And make potions. And feed troops. And add emblems. And research stuff and and ad nauseam. I am always short!

Yeah, and have two advanced ones that i’m still building. Still seems like there’s never enough left over to do the troops. Maybe need to just shift priorities a bit—put the troops ahead of other stuff

Maybe put them on a rotation basis.

Thanks for the feedback everyone. I went with Ameonna. Up to 10 on attack path 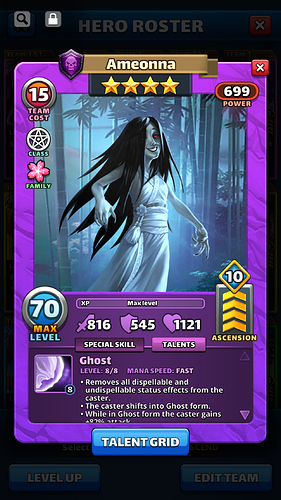 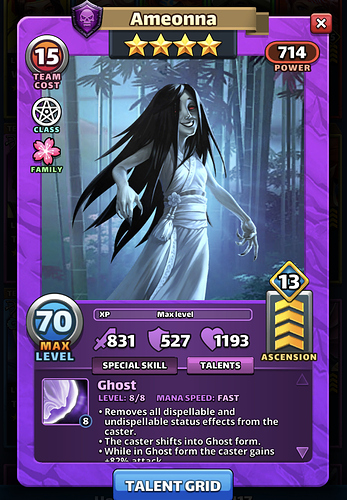 I was going to say CAT, but I’m very biased.