Emblemed Neith in how many hours after release?!?

How dare other paying players plan to draw the new HotM, store food & feeder characters and then max level said hero character which they drew using money/gems/tokens they’ve spent/acquired in this game?

The audacity to have have thousands of days of training camps saved up so when they draw the HotM through EHT summons or spending gems (that they’ve paid for with their own money) they can level up said hero to 80 and then use emblems they’ve saved up (or salvaged via reset from another hero) to apply emblems to said new hero.

I mean it is only November 1st (or 2nd in some parts of the world).

I haven’t seen one yet. I saw a few Kingstons the next day that were all the way up and had +8 with emblems. I have started to see more of them now too. The main thread has a few people already showing that they have her but nobody has gotten a pic with her leveled yet. They also changed the rules which I like that you just can’t post a pic that you got her. You have to post some useful info like how you will use her like for offense or defense, or titans vs. raids etc. which I think is nice. I have a bunch of EHT (well a bunch for me anyhow since I saw someone say they had 28, thats more than my bunch…LOL) that I decided to save for her instead of Kingston. Though in hindsight I guess I could have done half and half. My problem though is after that first half if I didn’t get Kingston would I stop or keep trying and if I kept going would I get him?

It’s like when they are tokens or gems they are ALL POTENTIAL. They might pull a 5* plus a HOTM. You can dream about using a single token to get one or like the pirates draw I saw they did a single and got Sargasso plus Kingston. But once you pull the trigger it all becomes reality and if it doesn’t work out you wonder if you should have saved them. The fiction was much better dreaming of how you would pull that event hero plus the HOTM in a single pull. Instead you get the reality of a bunch of Renfeld and Dawa which would be fine too but they didn’t bother to have a bonus draw attached. I need to just pull the trigger and accept that I will get nothing. Even if I got one of the few TC20 5* I want that would be OK though I really want a HOTM.

@Obsidian, this is the post I think Void is referring to

[image] Disclaimer, not my Neith. Seeing her this emblemed up feels underwhelming for tank.

I haven’t seen one yet.

Go to Rankings/Global and you will see one

If i ever get a purple other than a 3 star I’ll do a fast level up too. I’ve got a hoard of trainers and only Prisca

Are you running any TC20s? I only had Joon after 8 months of playing. I finally got TC20 up and running. I dind’t get a 5* until about 38 pulls. But when I collected 10 each from 3 TC20 for 30 total I got roughly 3 5* each time. Right now I only have Domitia and Obakan with Domitia at +7 but try running them. Even in my alt account which I really don’t use much anymore I run 1 TC20 and I have gotten a bunch of 4* from it so far which can be very useful.

Also, Prisca is meh…Balthazar is far better. I used Tyrum when I started not really knowing that Balt was a 3* sniper. Tyrum is nice though too he is like a 3* purple version of Sonya/Caedmon. He attacks and debuffs enemies. Oberon is powerful against other 3* but he is slow. He would be useful in the rush attack raid tournaments though where slow heroes really shine. Good luck and hopefully you get some good purples. No more Prisca and Renfelds…LOL

This defense team has 2569 raid trophies??? How is this possible?? Rigged 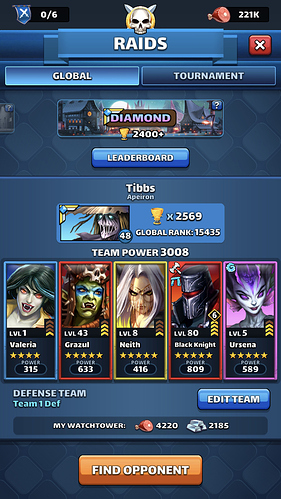 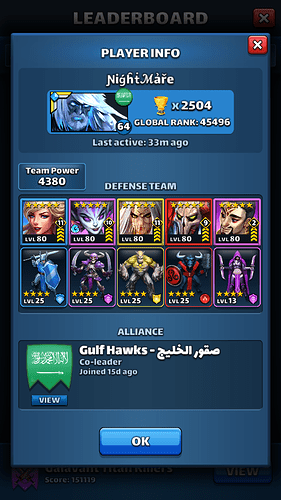 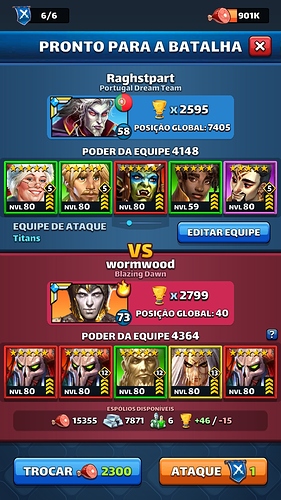 @Wormwood you got thrashed

Just going back through old posts…yeah, I ran into this buzzsaw on day 1 or 2 as well. I lost the first challenge, but won the second.

For the most part, I am a Free To Play, player. I have spent about $60 this year on E&P. Most was for VIP with 2nd builder, and next to zero was for summons. Up until I built my TC20 in October I only had one 5* Hero. Now I have five 5* Heroes. When I started using TC20, it wasn’t long until I had two 5* Heroes from the training camp. The other three 5s I got during Atlantis Rising, all three are HOTM, and all were a bonus added after an AR Summons. My first was Margaret many months ago. Then it was Kingston, and finally Neigh. My TC20 5s are Magni, and Kadilen. I also got a few great 4*s from the TC20.

It seems like it won’t happen, but keep it up, you’ll get there. Just use the TC20 constantly. Also, collect the Atlantis Coins to use for the free summons for every 100 coins. Try to get 3-4 free summons per Atlantis Rising per month. You just might get the HOTM for a bonus. It’s more common than you think. Three Alliance mates all got a bonus HOTM with in hours of each other… two months in a row!
Keep it up, you will get them.
Good Luck!