I was in a raid and had Obakan on my side with his Counter special activated. Opponent’s Elkanen hit him and killed them both. Elk was the opponent’s last hero. He disappeared, but the battle did not end, just sat there with no hero’s visible on my opponent’s side. I sent a few tiles to the spot where Elk was, and the hit animation triggered and the battle ended.

Any chance you screenshot it, showing all your heroes and your opponents?

(When I hear “he shot me, and both of us died”, I think Perfect Riposte was present…)

I’ve heard (read, actually) the same thing with Musashi and now I think it could happen when a “self heal on damage” effect hit a perfect riposte hero. Maybe the life gain occour on the dead hero resulting in said bug.

It’s helpful if you can replicate the bug, screenshots or video of it happening VERY helpful.

I’ll try with my Graymane

edit: seems like Greymane ins’t affected by the bug.
Test: 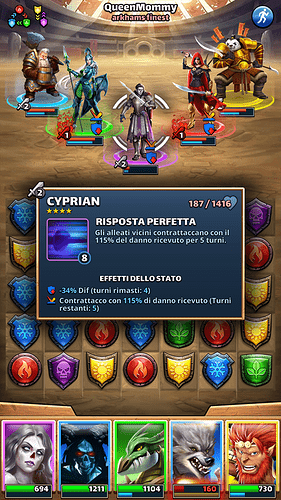 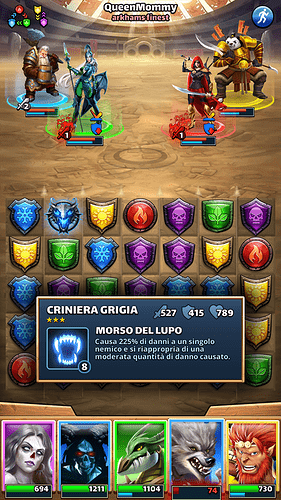 @Rook conclusions: even if the reflected killing blow was over Graymane’s remaining health the health gain occurred at the same time with the reflected damage, resulting in the remaining 74 hp.
Single target “vampiric” specials seems to be immune of the bug, I’ll retry when I’ll get my hands on a Perfect Riposte or a “vampiric AoE” hero to see if the health gain will occour after Perfect Riposte’s damage.

Sorry, no screenshot (wasn’t thinking about it, sorry) and I can’t see how I could possibly duplicate this. The situation was Elkanen’s special which steals damage back hitting against Obakan’s which is a personal Riposte. The Riposte damage was enough to kill Elk and he disappeared, but the match didn’t end even with him gone off the board.

Maybe the fact that they were the last 2 on the board did something weird.

Thanks for tracking it down. I wonder if others are also experiencing it?

I experienced this when my Cyprian was facing an Elkanen last week.

@Fantastic had just posted a video about that in this topic

This is being covered in other threads in the forum, in it’s current incarnation. Closing the old thread.