I saw them on the internet. 10 costumes are good looking, 2 are meh. The style is fine, but the idea of Khagan costume… He’s… well you’ll see.

How does everybody know how unreleased hero look like? I’m so out of the loop.

Thx for the poll.
I think I never seen this 100% result anywhere else.

I hope it convinces Staff to do some change.

Just check images in google for this. I found a facebook profile of a person who uploads photos of all new heroes that are in the current beta.
Try to browse by: empires puzzles klaern and one of the links will lead you to fb.

I hope at some point the costumes are different colors. A Blue Joon or a Red Carver for example. That would be interesting too

I can only hope that they didn’t bother updating the rewards in beta, but are planning to do so when it goes live…

Rarely have I ever seen such unanimity in the forums

No, make that NEVER before 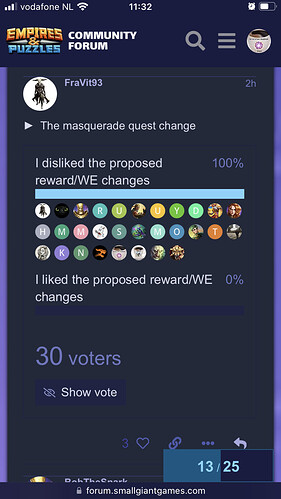 Use a new account that cannot be traced back to you.

For f2p and less established players the costume event has provided relatively accessible heroes/costumes which help them develop their rosters and progress in the game - specifically the 4 star healer costumes.
I can understand sgg wanting to provide a challenge for players, but this change is pulling the ladder up from newer players making it harder for them to progress in the game.

I really don’t know what to say to this rubbish.

I mean, on one hand it’s absolutely no problem to change a quest where we need plenty more world energy for more or less the same rewards. On the other hand it’s nearly impossible to make the change that the rare quests occurs during challange events again (which was requested by players month’ ago and which needs also more world energy because of quest + event). But sorry I forgot, it’s something the players like to have.

And what about new players? I’ve more and more the feeling they don’t care about them and hope that the existing player base will stay as long as possible.
Is it so difficult to think in more than one direction? Keep the quest as it is and add X more levels which are a challange + additional rewards. Smaller players have the same rewards and there’s a challange for the bigger ones. Is it really that difficult?

Yeah agree with all the points re new players. Like if I, for whatever reason, had to start a new account and play from the beginning… i would just delete the game, I would not have the heart to begin all over again.

Knowing that when I finish S2 and get some heroes there, they are already 3 years behind the new releases!

Was not a problem a few years ago… not like now! 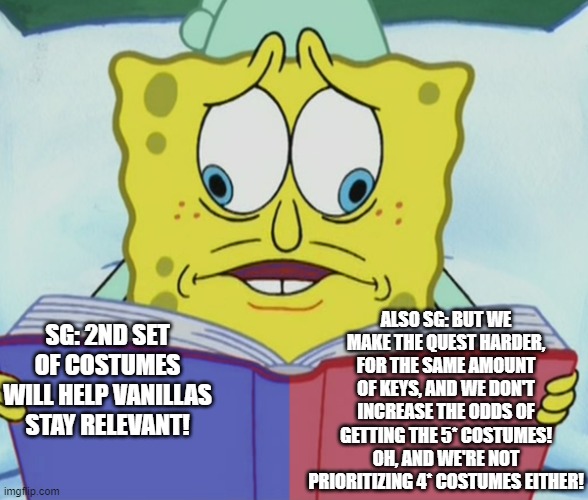 The more I read, and the more I think on it… you know what? Fine, I can live with new costumes (although, with those bonuses/power levels I hope that they’re not coming anytime in the next couple of months) and it really won’t be long at all til we breach the 1,000 power level mark. Khepri is already our highest at 991 if i’m not mistaken!

I would also add, that I don’t have any S1 costumes, and I’ve done a reasonable number of pulls in the last couple of costume chambers (but never chased or bought direct offers for it). I had previously bought the multi-pull offer (same as the one on currently), but I won’t get it again, since I don’t need it.

But this change to the event, is just completely wrong and unwarranted. Make it more challenging for sure - I for one, love a challenge, and I will still try to go as far as I can, but reward players who can make it to the top levels with those extra keys from the last 5 levels. Don’t punish all the other younger players who can still get a pull out of levels 1-10.

If ANYONE wants to say that this is a jusified and correct change, I think we’ll all be waiting with baited breath to hear your opinions and thoughts!

I had a max HP Director Zuri at +18 emblems and with 3 minions alive, and Joon killed her with a single shot.

I can understand sgg wanting to provide a challenge for players, but this change is pulling the ladder up from newer players making it harder for them to progress in the game.

til we breach the 1,000 power level mark

These new costumes are way above 1000 Power with LB and embleming.

Thanks for referencing again!

I have to say I like a costume more than a brand new hero! If you have the hero already maxed, you do not need the 4* mats!
The increase in stages is no problem for me too, but they need to give out more keys. At least 15 , better 20 keys would be appropriate.
And they should increase the number if stages for ToL too, 12-15 would ok but we need st least 300 coins.

Alongside making costume keys a reward for every stage (otherwise keep it to 6 stages and stop shoving irrelevant stuff in there and considering it a “reward”), the first two stages having TP that JUMPS like that is stupid as hell. I think Tavern of Legends is more balanced than this and the early stages at least allowed for a 3* team to survive the first few stages before things got harder.

And if the event just stays like this and I don’t get keys in every stage, I’ll stick to Mystic Vision and the occasional Wanted Mission with getting them because I’m sure they’ll just make another event that will make keys obsolete in a similar fashion to how every new Map season just replace all the old coins and make them impossible to get again without paying money.

Also consider replacing all those trainers with master trainers. Don’t y’all got an Elemental Quest y’all can dump those other trainers into?

Is this for real or just a (bad) joke?

I did not see this coming nor do I see any value in it…
… it won’t make S1 heroes better and it’s just another portal so it seems.

Or am I wrong in this? Sorry, I do not understand it.

There’s “trash” written all over this update. It’s unjustified, unnecessary and completely unbalanced. 5400 recommended team power for a 1* trainer? That trainer better give 20k of experience.
Whoever thought this changes should definitely have a different job.

I wouldn’t even call it an update. A downdate would be more fitting.