For more information on see here: 🧪 Early Information on New Sanctuary of Gargoyles Heroes [Part of The Beta Beat v48]

As with the League of Villains heroes, the Gargoyle heroes have a bonus when they are used in the Sanctuary of Gargoyles challenge event.

There is a special event effect:

Damage the enemies receive is reduced. The harder the Stoneskin is, the less damage they receive.

At the beginning of the turn when enemies reach Max Stoneskin:

The Stoneskin will be reduced if you don’t use any Special Skills or Battle Items during your turn.

When you use a special skill or battle item, then the “Stoneskin” meter at the top increases with 10%, which has 50% as maximum.

The damage to enemies is reduced with the percent in the Stoneskin meter.
So if it is at 30%, then for example Arrows do 70 damage instead of 100, and if you use an additional arrow without waiting 1 turn without an use of a special skill or battle item, then it will deal only 60 damage.

If you reach maximum Stoneskin, then the Stoneskin buff (dropping damage to 1 buff) will be applies to all enemies, and the Stoneskin meter will fall to 0%.

As with all other challenge events, the Sanctuary of Gargoyles comes with it’s own Summon Portal. See below for information regarding the appearance rates.


Yes, you saw that right. Trainer Heroes are in this portal also (same as in Legaue of Villains). The odds tho are different from LoV portal. There is STILL NO CHANGE to the event hero odds from any of the other Challenge Event Heroes.


Table Below compares Starfall odds to other event portal odds:

The “Sanctuary of Gargoyles” makes use of the existing Challenge Event Coins currancy for summoning. It also features the Suspicious Chest’s as a rare & random monster which drops 1x Challenge Coin as bonus loot. 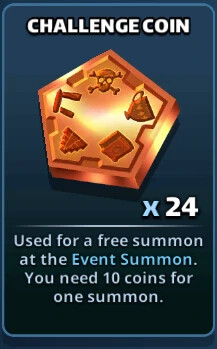 The premise of Suspicious Chests appears to be similar to the concept of Orichalcum Seadragons appearing at random during Atlantis Rises and dropping Atlantis Coins, which can then be used for Summons. One difference is that in initial testing, it appears that Suspicious Chests only drop a single Challenge Coin — but you only need 10 of them for a Summon, not 100.

The goal of a Challenge Event is to get a high master score. The players with the highest master score win exclusive loot at the end of the event.

Master Scoe is the combined score of all stages within a diffiiculty tier. Each difficulty tier has separate master score. Stages can be replayed for the best possible score.

The score from each stage is defined by the enemies defeated, speed of completion and the amount of the Hero health left at the end of a stage.
Big combos and great matches are also taken into account. Using Continues has a negative effect on the stage score. It is possible that Special Enemies spawn in stages. Defeating these enemies gives bonus points and awards Challenge Coins.

The different Difficulty Tiers have limits on what Heroes, Troops and Battle Items can be used in fights.

Gain addiitional perks in the battles by using the Heroes of the Challenge Event !

Heroes of the Gargoyle familiy bypass the Elemental Barriers, and have increased attack, defense, and health in battles!

Damage the enemies receive is reduced. The harder the Stoneskin is, the less damage they receive.

At the beginning of the turn when enemies reach Max Stoneskin:

The Stoneskin will be reduced if you don’t use any Special Skills or Battle Items during your turn.


The Sanctuary of Gargoyles follows the the usual set-up for Challenge Events with 3 difficulty tiers (Rare, Epic & Legendary); It is however, Like LoV, using the old format of only 10 Stages for each tier. 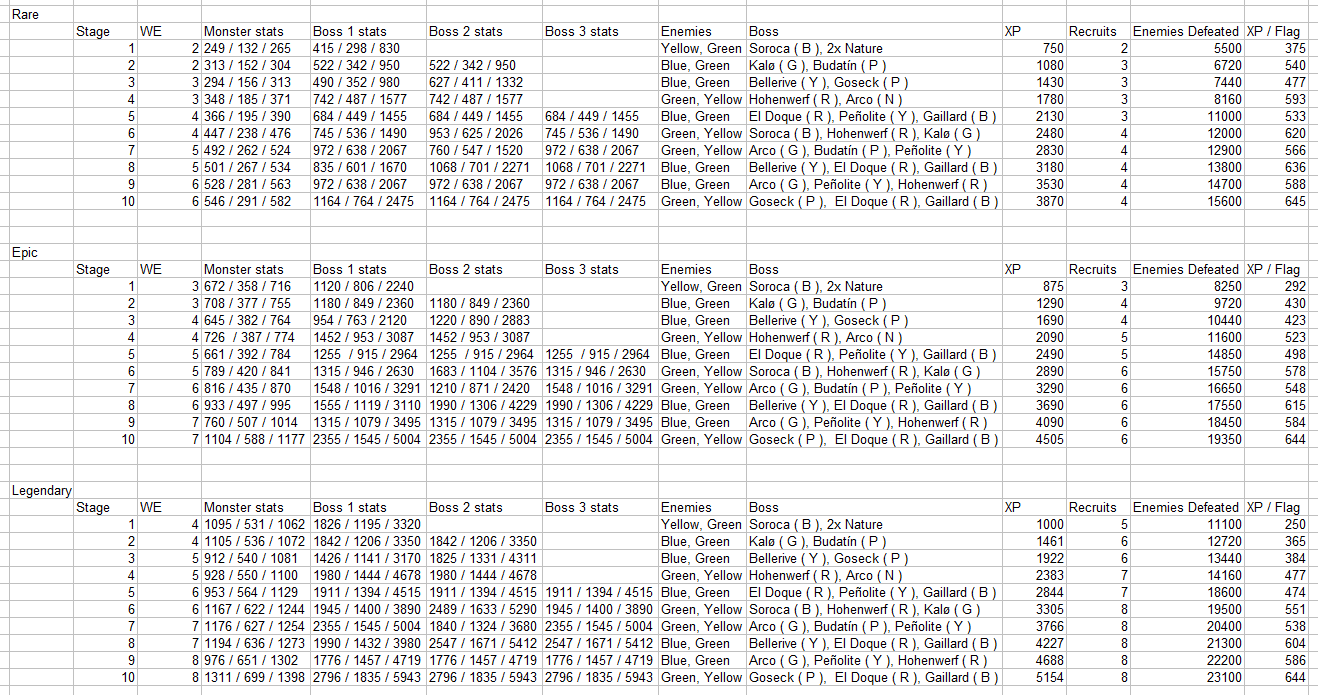 *Sanctuary of Gargoyles has the similar tier based reward system like any other challenge event.

Damage the damage receive is reduced. The harder the Stoneskin is, the less damage they receive.

It seems very similar to the rage mechanic of the Slayer event. Does it raise at the same pace?

Can you please elaborate on what this buff is?

Once again, thank you so much for the time you put in creating these threads and replying to dumb questions from annoying members like me.

Answer to the first question:
You can use 5 items and/or specifial skills before the meter at the top fills up.
If it fills up, then it drops to 0 after activation. (So not staying at 5 as the Rage meter).

Answer about Stoneskin buff:
All heroes have Gargoyle’s Stoneskin Passive.
That passive activates even if those heroes have not used their Special Skill.

Answer about Stoneskin buff:
All heroes have Gargoyle’s Stoneskin Passive.
That passive activates even if those heroes have not used their Special Skill.

They won’t take ANY damage?! That will be annoying as hell.

If it fills up, then it drops to 0 after activation. (So not staying at 5 as the Rage meter).

I guess this mitigates it a bit, but still.

But that drop to 1 damage is applied to the first 1-4 damages.
So you can deplete it fast with tiles
But of course it is causing delay and the opponent can kill you in that turn when you have charged heroes…

Thx, I will add it to the event’s topic.

What element reflect is this? I’m assuming red

I heard is green which surprised me.

So… this will be “tougher” than Slayers due to the extra buffer for the enemies: Stoneskin buff.

Slowing down their activation will help then. Mana control ?

Plus Taunt to buy time.

What element reflect is this?

Yes, it is green as I have written it to the OP and the V48 main thread.

So… this will be “tougher” than Slayers due to the extra buffer for the enemies: Stoneskin buff.

Slowing down their activation will help then. Mana control ?

If the buff is given by the hero, then mana controll can help, but if you use 5 items or special skill withinh 5 consecutive turns, then the Stage will add this buff to all Gargoyle enemies.
Maybe giving buff immunity can help, but I will try it, and let you know.

When this buff is active, then the opponents are shown is a semy-ghost form so that you can easily see that you can not really harm them.

I have missed on thing what I will add to the OP later.
Each time you use a special skill or battle item, then the opponents will get 10% less damage next time (maxumum: 50%)

The OP is now updated with all informations.

Again with the enormous S1 odds 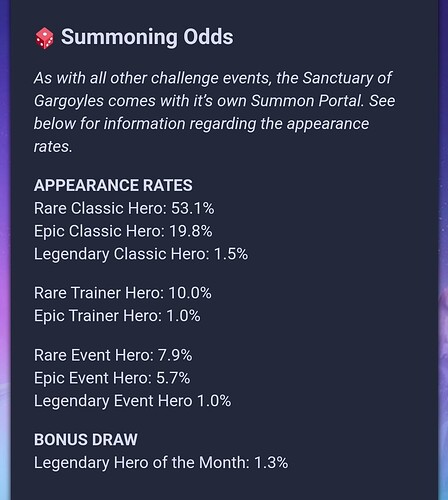 For more seasoned players S1 heroes are nothing more than feeders for Soul Exchange. But even a relatively new player won’t be happy with Quintus when it could have been Goseck instead–and when already many 4* event heroes are better than most S1 “legendary” heroes without costume…

). Then there are at least a few really good consolidation prizes and more useful heroes.

Agreed, I’m a new player and yet I still don’t want to draw an S1. Ascension mats are hard to come by and leveling is slow. Who would want to invest in a hero knowing that hero won’t measure up from the beginning? So they’re all food for more recent releases. I would honestly prefer 50% odds of pulling trainer heroes than ‘Classics’. At least they serve a purpose.

they have to increase the percentage of epic trainers. 1% is the same as the hero of the event. it will be very annoying if you get an epic trainer!

The epic trainer percentage was higher initially when they first added them to new version challenge events, but following the first month where there were a number of complaints from people unhappy with getting a trainer instead of a 4* hero they reduced it to what it is now.

and now they got epic trainers. then they will be more unhappy. because it equals % with 5* heroes from events

as a good amount of players have Penolite, i can see the Legendary portion being highly contested for El Duque.