This thread is to provide early insights and discussion on the new Contest of Elements Quest - Nature Version.

The Contest of Elements Quest structure is similar to the Tavern Legends Quest as it contains 10 stages, which can be played succesfully only once.

There will be Hero Roster Mastery just like the Taverns Quest:

Each hero can be used a limited number of times.

Heroes are considered usen when you start a quest battle. The battles get increasely difficult, so plan your Teams carefully.

All shields release Nature Troops when matched. Troops use the average attack power of your team’s Nature Heroes.

All Troops released from Nature shields are STRONG and also give the most mana.

The number of items that you can bring into battle is 100% more than normally per item.

You can only bring Nature heroes to the battles.
As noted in the rules you bring twice amount of battle items what you can usually do. (Eg: 20 Small mana potions, 10 Tornados, and you will need those as even the first stage has 5 waves.
Hunter’s Lodge items are also allowed.

All waves are like a boss stage, where all enemies are elite enemies.
There is at least 1 boss at every wave, which is a Nature hero from the portal.
The final wave contains 3 Nature boss heroes.

Mana speed in the event

I have created a table about how much tiles needed to charge you heroes at various mana speeds without any mana troop or mana generation buff / stack: 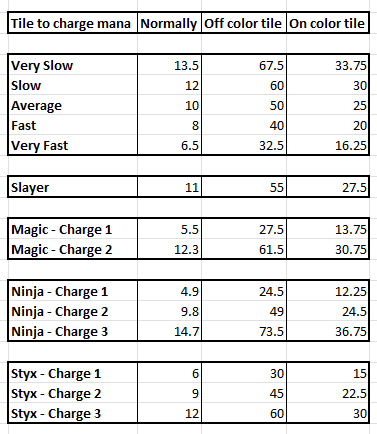 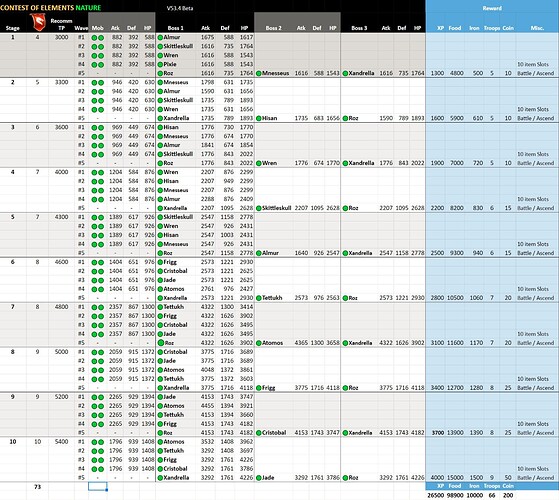 Topic about the new Heroes in the Quest:

The portal runs on Gems and Elemental Coins.

Your progress towards the next chest will carry over to the next Super Elemental Summon event if you still have chests in stock.

Right now in Beta these heroes are available in the portal:

The chance of Season heroes are no longer visible in the Apperance Rates.
All Holy Heroes who are at least 180 days old are available in the portal.

Used for a free summon at the Super Elemental Summon. You need 100 coins for one summon.

Will be there quest to other elements: Yes

Recurrence of the event: Every second month.

Will be there new 3/4 star heroes: Maybe

For a full list of items currently in Beta testing, as well as their related threads, please see:

Interesting that green elemental chaos charges faster than holy (10 vs. 14) and transforms more tiles (7 vs. 5). Maybe it will be easier.

The bosses (Roz and Xandrella) make the nature version harder than Holy. Jequen doing 200% at very fast seems dangerous, but Roz doing 500% at fast can take you out quickly, especially when she can hit all five of your heroes and bypass taunt. Xandrella is the easier boss here since you can antidote the mindless attack, but also does a ton of damage.

How come Roz can bypass taunt? Nothing of the kind is stated or implied in the hero card. 🧪 Early Information on Contest of Elements (Nature) Heroes [Part of The Beta Beat v51]

Is it a side effect of the number of targets being variable?

Do we have an idea when the event will be? December? Early next year?

Also, I know it’s not the first time, but I just love how the featured heroes have a drop rate of 2‰…

This will arrive on as I recall on December 5th.

They might implement that change for the next yellow CoE though.

Yes it should be on the 5th of December, same time slot as the Mythic Titan.

I was able to complete all 10 stages on my first try, but be careful of Roz. Her sniping power combined with the ability to do damage to more than one hero can quickly ruin you.

These TPs are well below the “recommended”. I guess I’m glad they have these to show they’re difficult, but I think it gives folks the wrong impression. I bet we’ll see some posts of folks that can’t make teams to match the recommended team power.

Stages 9 and 10 were actually the easiest as I saved some of my best heroes for last. Another Almur would be helpful. I should have used Mother North and Buddy earlier too. But it’s also nice to save in case something goes wrong.

Beginning the process of thinking through this now. Think I’m ok for the healers with grevle, Faiez, kashrek, Melendor & LotL. No overhealing late on but stage 1/2 will probably be flank kash and By ulf so as I can heal all team still.

Last 2 stages I think will be LotL, Guan Yu, Kingston, Almur, Caedmon.will need to properly look at roster to figure out. I have a feeling that like last time my main struggle will come in levels 5-8 where I try and stretch depth but once get to main team I should be ok.

I have Quenell, El Naddaha, LOTL, Almur and Winifred for the 2 last stages. Winifred and her monstrous attack down will make it easier

Now I need to make the puzzle for the other stages from 1 to 8.

Oh great, more powerful heroes for Nature when in Nature I only have Kashhrek as my overhealer - at least in Holy I had 2x Gullinbursti that gave healing to all. I feel like I am going to be using a lot of revive scrolls haha

I think my last 2 will be who i use for raids:
Mother North / Evelyn / lady of the Lake / Liana / Kingston

I am not quite sure what teams i will use for 5 - 10 exactly, I do have some decent enough ones in terms of healers and a few minion makers. I just wish some more of mine had emblems like Brontes could be useful.

How come Roz can bypass taunt? Nothing of the kind is stated or implied in the hero card.

Is it a side effect of the number of targets being variable?

The following was reported in a beta thread

I found that when Roz fires his target and nearby shot at taunting Ludwig, he actually shots the three heroes. As if the taunt was not there.

I rationalized this is intended. It doesn’t say it targets it just says damage is dealt. It feels very specifically worded to bypass taunt. If not the wording should be changed.

SG said they’d look into it. It’s possible this will change by the time this goes live.

Oh great, more powerful heroes for Nature when in Nature I only have Kashhrek as my overhealer - at least in Holy I had 2x Gullinbursti that gave healing to all. I feel like I am going to be using a lot of revive scrolls haha

Well you can see my entire roster that I posted is limited to Grevle as an overhealer (or Ptolemy if you count him).
I’m not sure if it’s necessarily more powerful for nature. Xandrella is easy to deal with with just an aintidoe. It’s more that Roz is a sniper and snipers can do massive damage to one hero. It’s just different.
I wouldn’t use Kashhrek. I’m surprised you have three of him. Using revive scrolls isn’t a big deal as I assume most people have a ton without ever crafting them. I don’t think I used a revive scroll anywhere other than on the first wave in the ten stages.
You’re more than fine on healers: LOTL, MN, Rat, Mel, Ptolemy, Grevle
You also have more than one EDD which will help a lot.
Stages 5-6 will be the hardest with your roster.
9-10 will be easy with LOTL. Evelyn-LOTL-Kingston-Lianna-LJ
7-8 will be fine because you can use MN to keep yourself alive and Almur to improve damage for everyone else. MN - Almur - Cad - Cad - Orla
5-6 I’d go Rat - Hansel - Hansel - Peters - Lady Locke
3-4 Mel - Noril - Kad - Skittle - Gobbler
1-2 Grevle - Jing - Whacker - Isshtak - Berden

You still have Shrubbear, Jack, Jing, and Mnesseus on the bench if you want to use either.

It’s not healers you will struggle with, but hitters.

Teams with some thinking.

Screenshot_20221116-134800~2800×323 252 KB
Managed with multiple unleveled in the yellow quest for these stages so happy with this. Potentially lacking firepower so may have to do some carpet bombing depending on how things go…

Do you need both zocc and LotL on one team? I don’t have her so I can’t speak to how well control the enemies but I would think zocc could be better utilized elsewhere to slow enemies.

Regardless those are solid teams. I see 5/6 being the toughest for you.