Is Drake fuong worth maxing? 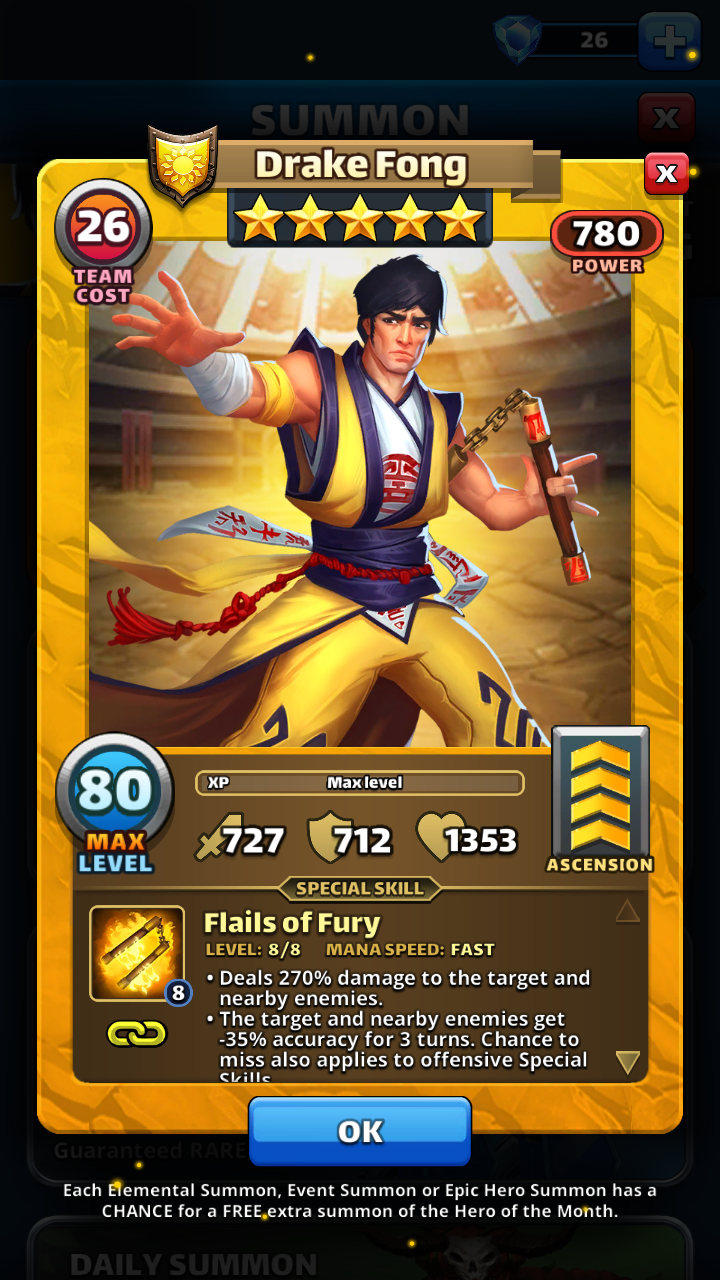 Long Answer: Personally, I am underwhelmed by him as a HOTM. He brings nothing new to the table. He’s the 66% ground between Joon and Justice, with the same ability at the same percentage, with the elemental link thrown in there because… well, because. He’s Fast to Justice Slow, but hits 3/5 enemies (if your target is positioned well). Either way, you’re not going to be upset if you have him. WITH THAT SAID: If you plan on doing event pulls, do all of those on the off-chance you pull Guinevere. She is obviously nicer. But if you do not have a yellow 5*? Do it and don’t hold back.

I also need advice in my special constellation.
I already have G. Panther and Gravemaker, who both target three enemies.
I also have all ascension materials to level a yellow 5* up, but I think it would be stupid to level a third hero=Drake, that targets 3 enemies again, right?

I don’t think hitting 3 enemies is stupid, even in triplicate, with G. Panther & Gravemaker. I actually think that it would be a very nasty combination.

You don’t have to hit the SAME 3 enemies with all 3… but if you did, they would have -54 def dark, blinded, and take damage every turn. SO… what’s stupid about that? (EDITED FOR CLARITY)

i run single color teams so the last 5 HOTM have been nice with their elemental link. If you are stacking yellows then level him away

What do you mean by “if your target is well positioned”?

Well, the target being “well positioned” will mean you hit 3 enemies. Such as when you tap which target you want to hit, make sure there is an enemy on either side so you get the full effect. If you target the 1st or 5th hero, you will lose the other side of the “nearby” effect and only hit 2, not 3 enemies.

He’s the 66% ground between Joon and Justice, with the same ability at the same percentage, with the elemental link thrown in

That’s a good summary. I have Musashi and Joon maxed, and so I’m not drooling over Bruce. But he’s really pretty decent overall: my 7D colleague @Anchor and friends have given him a rare “A” in their Complete Guide. So, yes, he is worthy of darts, especially as a first yellow 5*.

He would be my 2nd maxed yellow 5*. Right now i only have viv maxed. Other options i could max:
Leonidas
Drake
Another Viv

I would choose Drake over Leo for your 2nd 5*.

No need for a second 5* Viv with such a premium on materials.

10 darts and 20 orbs is current stock

Hey, that’s really cool! So do Drake now and Leo next!

Sounds like a plan if i dont get guin

Was a gentle way of asking if you were targeting. Surprising, but alot do not.

Ah. Well, indeed. Some do not know, which is why I made mention of the “well positioned target”