Do you use harvesters efficiently? when? 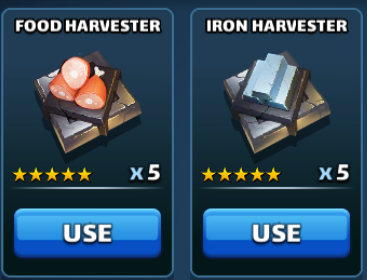 When new Season 4 map stages are added, I activate the harvester and finish them all with help of WE flasks.

Not sure if that’s efficient but that’s the only time when I use WE flasks beside Valhalla and Atlantis, where the harvesters do not work.

But on a side note, I only used the omnia harvesters so far.

Not being able to use them during AR or VF makes them very underwhelming.

Using flasks on normal levels looks like a waste in my opinion.

An improvement is maybe to make them also useful in monthly events and quests as some players use flasks there. Or that they can also reduce S2-S4 stages cost by 3 energies as well making them mini AR and VF

Anyone wants mine. They are free to all.

I never use them. I use WE flasks exclusively on AR, so no harvesters. I can’t qee the point of wasting flasks on S4, as whatever levels I don’t play while the portal is open I’ll have played before it opens again next month.

I just throw one on when I’m I finish an event and have a few days before a new one starts. I don’t use flasks during them unless a surprise event that I want to finish pops.

I have yet to use a harvester of any flavour.

I usually base mine on the quest screen. If two quests have popped recently, and I don’t plan to finish either of them, then I’ll wait for my energy to fill up, then pop a harvester.

(I suspect this goes without saying, but to be safe/thorough: I’ll only do it if the quest timing scenario also coincides with a break between AR, VF, and challenge events. As you might imagine, this is pretty rare! As such, I’ve used only Omnia and Item harvesters.)

Sorry, totally distracted by the Vincent Vega gif. What were we talking about?

I use them when I have an elemental chest to fill. I know I’m going to probably use a flask, so it makes sense to me.

I have never used one. I just finished season three avatars so maybe I’ll use one when I go back to grinding season one for a day.

At the same time I don’t necessarily need either food or iron with much urgency.

I also have never used one.
In the time I prepare to use one of harvester, there are either Atlantis Rises, Valhalla Forever, Event Challange, Seasonal Quests, Tavern of Legends, Ninja Tower (even this does not require WE it require times), POV requirements, Rare quests, Trial quests, or any other valueable quests.

Well, maybe now it is currently quiet in my quests, but lack of WE… lol

and I don’t want using flask for it.

I used the Iron harvester during item heavy events. Usually either Mythic Titans or Challenge events. Other than that I don’t really use them.