Do you remember who your first 5* hero was, and how it made you feel?

Kadilen, TC20, after 7 month of gameplay… Seems TC20 got stuck on green, cause I only got Horghall and Elkanen so far beside Kadi… they all wait at 2/60 for Liana…

And I thought saying Thorne would make me unique :))) he was my first one, never got a duplicate and …he is still camping at 3/70. After more than one year since I’ve started. It’s nice to check him out every now and then but nothing more. Hail Thorne! ^^

Been playing since Feb if this year . Saving gems and doing all the events. Was waiting for an event. Only really had 8 characters that were keepers. Two four stars Colen and Hu Tao from epic coins. Grim stone came around and did my first ever 10 pull hoping fir Frida . Lol
Got all 3 star which I needed but 2 dawa and two lelani. Already had them
I got my first Five star BOSS WOLF.
Already in my line up . Great addition
Trying to get to tv20

Started last October. My first was Justice (Aegir as bonus in the same pull). Then, next pull gave me Azlar, and Renfeld (second Aegir).

Started in September 2018 and have been F2P all the way. My first 5-star was Onatel. I had already built reasonably strong 3-star and 4-star rainbow teams, and being F2P, I expected not to get my first 5-star until I got my TC20 up and running. It was funny, because early January 2019 was the first time I had ever even paid attention to who the HotM was. On a lark, I checked out her card and was like, “Wow! That seems like a really powerful hero. Whoever gets her is going to be lucky.” Then, when the Atlantis portal opened for the month, I had 400+ coins to burn through, and on my second pull, out came ANOTHER Gato. The next few seconds passed in slow motion:

…portal starts another summon… me internally, “wait, I didn’t hit the summon again yet, did I?”… notice the “Bonus Draw” at the top of the screen… “Bonus draw? Oh, yeah, I read about those. Doesn’t that only happen when you draw a 5-star? Oh, man! I’m about to get my first 5-star!”… Onatel appears… mouth hangs open in utter disbelief… just stare at the screen for a few seconds, wondering if that really happened… it finally sets in, and I start to scream… I realize that it’s 5:45 am, and I am the only one in the house up because I’m getting ready for work… decides to scream internally instead.

Now, I had just begun reading the forums a few weeks before, and I had noticed that there were more than a few heroes that folks were like, “Oh, groan. I got a 5-star, and it had to be this one.” Knowing that it would take super-rare materials to max Onatel eventually, and that those materials were going to take a long time for a F2P to collect, I went straight to the forums to see whether the community agreed with my assessment of her. Unlike others in this thread who pulled Thorne or Kaidlen and were disappointed to find out that most folks don’t think very highly of their first 5-star, I was so pleased to see that many people consider her a second tier tank behind Guin (who I will never have) and Gravemaker.

I am now able to complete Legendary tier events, Atlantis hard levels, and other feats that my rainbow 4-star team never would have been able to without Onatel’s mana control. I am now impatiently waiting for 3 more darts, knowing they will be invested wisely in Onatel, who will always have a place in my heart as my first 5-star.

BTW, my second five star popped out this month during Atlantis, and it was Poseidon! My reaction wasn’t much different from when I pulled Onatel - yep, still 5:45 am, so still no scream. I realized that, at that time, he had only been available to anyone in the world for about four hours.

I am so excited to have both of these non-classic 5-stars on my team. Although they are both yellow, Poseidon still has utility for me as a fighter in class trials and as a fast, powerful sniper against purple titans, even at 3/70. I just started my TC 20 this weekend, so perhaps more 5-stars are on the way, but I have a feeling that Onatel and Poseidon will always be among my favorites. I really hope the avatar for completing Atlantis is Poseidon. I will use it in a heartbeat, because pulling both of those on Atlantis summons makes me feel like I am the King of Atlantis!

Ouch, I’ve made that same mistake with a 4 star before when I was a noob. I can’t imagine doing that with an awesome HOTM though. I do have 3 Onatel’s from my failed quest to get the burrito (going to hold on to them until that hero trade in system releases in probably a year). Recently I’ve fed a second Thorne away on purpose. I lol’d when it asked me a second time if I was sure before feeding him away. BTW miss the streams.

2* Onatel in same pull. I was like OMG what is going on here, jabadabadoo. I also got Kasshrek and Sabina same time, so I felt really blessed.

Last week I got my third 5* here, Misandra. This time I was like meh, well what am I going to do with her then?

Got Ariel and Frida in my first Atlantis x10 pull

Haha that’s EXACTLY what happened to me except with Aeron. 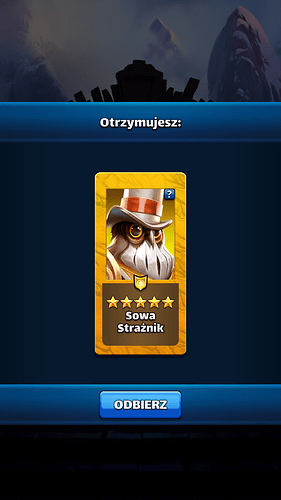 Gravemaker, when I started playing last June.
And I’m still at 4/6 rings, so he’s still at 3-70. And I have seriously MIXED feelings about red.

I guess it’s another 3 months to roll through 2 mount umbers and get him sorted. And then, I don’t know what my plan is. If it takes another year for each maybe there isn’t one

For a long time I was also short on hidden blades so I only had BT maxed, and gravy at 3-70. And gradually, I’ve expanded to have wilbur maxed and only a week or two ago scarlett.

My first 5* was Lianna. Already knowing a bit of the game and the heroes potentials, I was very happy to get such a good sniper first. But then it took some time to max her.

I’ve been lucky: my first 5* was Ariel! I pulled her at the beginning of March, after playing for about 5 months As C2P and with good info from this forum, I had slowly built up my heroes, maxing 3s and then 4s. My kids also play and they idolize Vivica as a 5* healer - none of us were even aware of Ariel’s existence when I pulled her. I realized how amazing she is pretty quickly and my kids freaked out.

I just got her to 3/70 today and only waiting on one more scope.

My second was Lianna, as my FIRST pull from my TC20 last week!! And my third was Anzogh, just yesterday along with G. Falcon from a 10x. I’m flying high right now.

Today I got an EHT from MV got Squire Wabbit and Anzogh!

My first 5* was Azlar. I still find reasons to use him despite his slow speed.

My first 5* star was my SARTY PARTY!!! Woot! That blue skinned Evil-lyne has never lead me astray! only took a year to get her to level 80!

mighty Misandra.now at 3.70 because after a while i got Athena