Did Alberich, Toxicandra , Gramps all get the mana generate toned down? (solved V41)

I am almost sure, my eyes didnt lie me multiple occasions!

I believe all those heroes were generating moderate mana each turn for team and now they generate small amout of mana.

Is it just my demented mind?

You are right, just look at old screenshots from Google - they used to generate moderate.

It’s not you… The description has changed. The question is if the special has been changed as well? 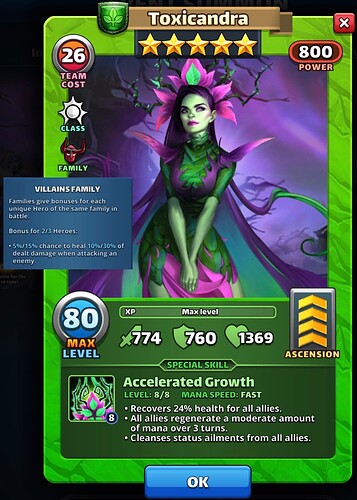 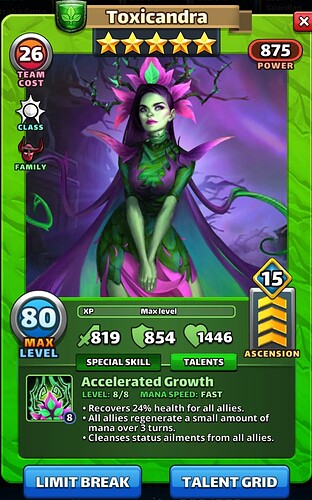 This has happened quite some time ago:

I think it was a typo at first place it’s always been small. Based on moderate on Fenrir which gives like 25% mana. 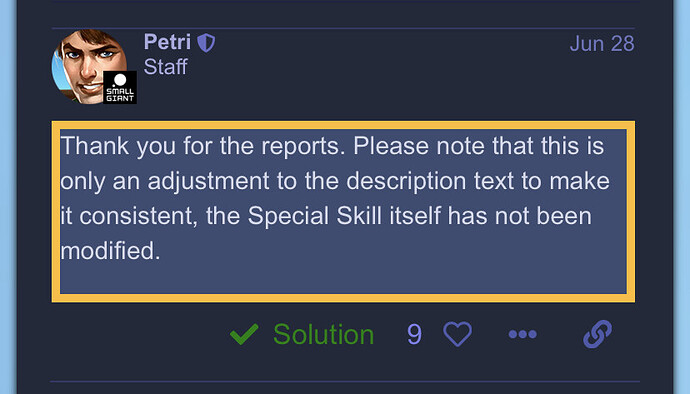 Are you sure it solved?
It still written as small of mana, and it is not consistent,… it should be rewrite with different text/desc, like before as moderated, not small.

The text description should be change.

I confused with what @Petri have said:

this is only an adjustment to the description text to make it consistent.

Different result should display a different text, I guess.

SMALL and MODERATE, it is two different functional.

Petri meant that SGG corrected the description : should be Small. Not Moderate. No change to special.

should be Small. Not Moderate

OK, so there are no Moderated mana anymore, only Fenrir has a description written Moderated.
The others, it is hidden in our memory if there is a litte or medium mana.
So, this means, it will be like Increased damage against elements.

Guide “Increased damage against elements - how much? by Vikingblood80

I don’t have Fenrir so I can’t comment on the difference between Small and Moderate mana. There’s a post

I can only assure that I have not noticed any significant differences in the Mana gain special for Toxic. I use her a lot.

So it’s as Petri responded : just a change in term. From Moderate to Small. This means that Fenrir’s moderate mana gain should be significantly more than small yah. What’s the difference? I don’t know.

no, that’s why i said it is like Increased damage against elements . How much we should remember it with write on our notes.

And as per the release notes for Version 41, the description is reverting back to moderate for Toxi and Alby.

Ah I knew it… it was just in my mind, it was always moderate mana gain ! Guess im getting older, but not wiser