Devana VS Drake Fong, who gets the Limit Break? 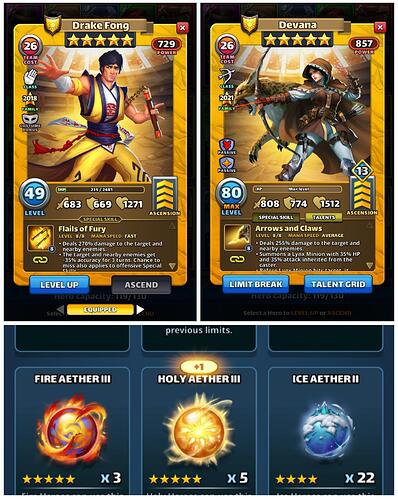 I’d say Devana. Drake may be faster, but Devana has debuff, which only 2 of the yellow 5* have, the other being Vivica-C. Plenty of heroes who can give the blind ailment. I also use Devana alot more than Drake these days.

I don’t have Drake but Devana is more and more becoming an absolute staple. A decent hit 3, dispell and a chonky little lynx makes her a very good hero.

I don’t see Drake in defences nearly as much as I did but he’s rarely a problem these days.

Another vote for Devana!

I had the exact same choice and went Drake. No regrets. His stats are incredible after that last buff the HOTM got. With that buff, he has a base defense of 939. He’s on par with stats of the latest heroes. 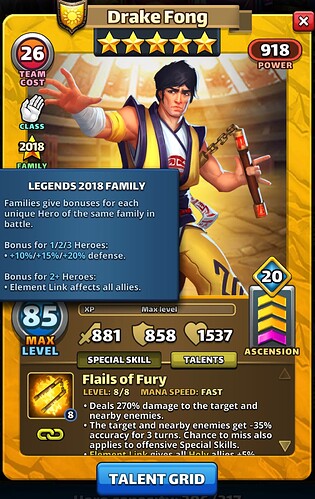 I see that you have costume for Drake and thats why I would LB him first, he will be great for defense and offense.

Thanks for sharing your thoughts folks, really appreciated it

Not a recommendation as such, just a factor to throw into the mix:

If we were talking about who to ascend I’d vote Devana, but limit breaking is another matter. Both are very useful. Devana is tough, though, so can survive pretty well without the extra levels, at least while you collect another round of aethers. Meanwhile Drake could do with being less squishy. So I’d give some thought to breaking him first because he needs it more, rather than because you need him more, if that makes sense. However, I don’t have him so couldn’t say for certain - he’s annoying as you-know-what in defence, but if I get one vertical match under him he’s toast.

I would have to recommend that when limit breaking Legendary heros I would sincerely consider what hero has use in Raids, Defence and Titans? If you have a hero that is used on all 3 that would be a much more beneficial outcome for your gaming future. However thinking costume Drake Fong a score and Devana a great hit 3 with gusto. Your roster and a long term strategy might be the answer!! Hard decisions!!!