Devana, Caitlin or Aouda for LB?

So my choices are in the picture, I also have a non-costumed Joon with emblems, but I hardly ever use him (not been lucky about S1 costumes that I actually leveled). Mostly I’m posting here as I’m curious if others have LB Devana, Caitlin or Aouda and can speak to their experience. I’m especially interested in Devana and Caitlin if they really improve with LB. Aouda should be pretty obvious of the benefits. My problem with Aouda is she really is like a non-costumed Lianna as she rarely has the chance to use the over-heal affect.

I use Devana and Caitlin most in wars and raids, and am leaning towards Devana for how versatile she is. Uraeus just got stripped of his emblems so I could +20 Xnolphod, so it may be a while to get him back and I may ascend LotL next and would have to debate emblems there.

This answers I think between Aouda and Devana: Limit Break AOUDA or DEVANA?
So more curious of Caitlin for feedback

I LB Caitlin because I have other Slayers on my defense. She went from ehhhh to wow after the LB. I’ve stayed around 2600+ trophies since LB’ing Caitlin.

Have you noticed much on offense? What attack stat did she achieve?

Beside Caitlin, I have all of these + much more.

My choice was Thor.

Limit Breaking helps addressing one of the things people complain about which is his “only” 300% hit. It gets a visible damage boost. + he stands longer which means increased chance to evolve into his 3rd charge. If you are using him offensively on regular basis, I think he’d be the best.

I am surprised to see Aouda leading the vote here as she’s the very definition of “meh” altogether.

On defense, none of these is really an A-tier choice so I wouldn’t advise to make that choice with defense in mind. Unless, like @Queefbag mentioned, you plan on running multiple slayers together.

No, unfortunately I do not have a decent yellow hero to stick on defense. I usually use 2 green on defense as I have a good set there

i’ve lb devana. her minion’s beefy hp is more than 600. she got great survivability.

dispeller, minion’s killer, mana booster, medium attacker. what else do u want?

I really enjoy Caitlin, but I am a fan of AoE. Here’s mine (a staple in my raid team) 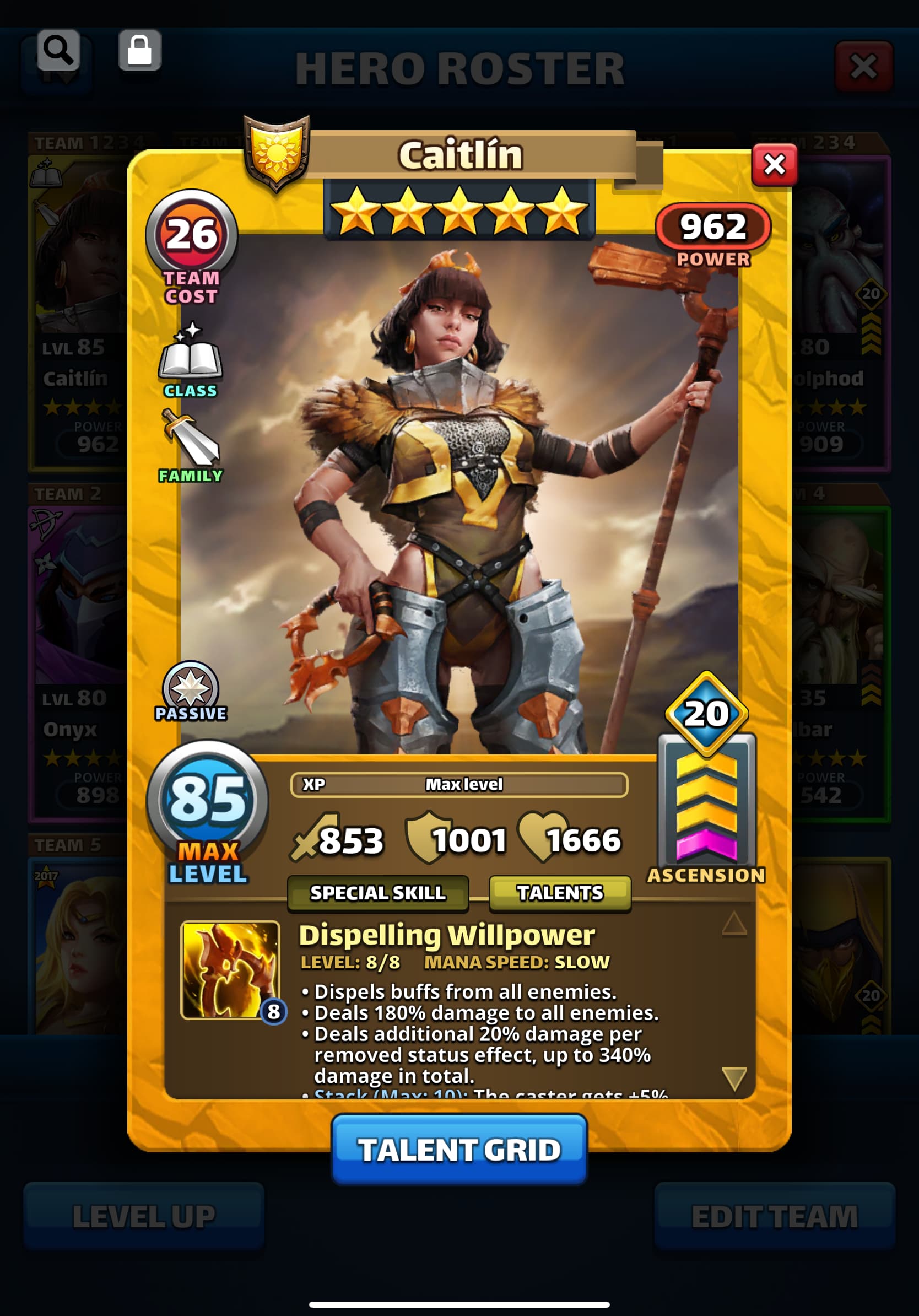 Thanks all. Due to not likely replacing Devana for her minion role and dispeller role, I think I may chose her. Caitlin is great against dodgers, but I think I use Devana more often.

How about Devana vs C. Vivica

I voted for Devana because her dispel to 3 is invaluable and I always have either her or Seshat as my main dispeller. The minions they create are a bonus that’s for sure!