After several months of statistical analysis of raid and AW fighting, here is my conclusion.
The damage can be estimated from the attack / defense ratio with a power function.

EDIT : After the post of RedPython, it made me think and I redid my calculations …
And finally, everything is clearer! all my previous calculations are merged into one formula, so I modified the original message. Again thank you @RedPython!

Tile damage is divided by three 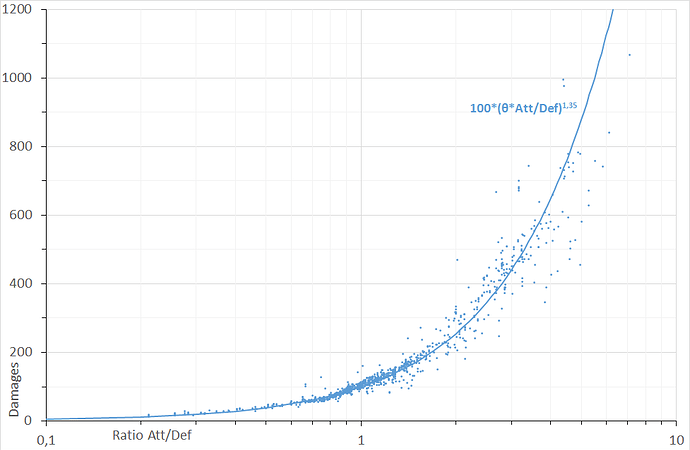 I have no way of being sure of the formula used by the game algorithm, but these estimates are reliable for the 1047 cases studied. They allow us to deduce interesting things.

As long as the attack is inferior to the defense, the damage is ‘compressed’ between 1 and 33 for the tiles and 1 and 100 for the special skills and attacks of the defenders.

Having several heroes of the same color only increases tile damage. They are calculated by adding the attacks of these heroes

Lowering the enemy defense is more effective than increasing the attack.

Combining defense penalties and attack bonuses has a devastating effect.

I hope they will not change the calculation right away …

Can you translate the three French parts?

That’s right. I replaced the graphic with the English version in the first post.

So, if I may, I want to check if I understand you (@SolemnWolf) right:
Attack is the Attack-Stat (including all bonuses from troops, color, …) of the attacking Hero?
Defence is the Defence-Stat (Shield) (again including all bonuses) or the defending Hero?
The ± 50% are taken from the ratio?

So, it seems, that for tiles the damage per tile is actually one third (maybe you’d like to try a factor of 33 instead of 30, although that might not make a big difference), because you need at least 3 tiles to “shoot”.
Very interesting. Big thank you to @SolemnWolf for sharing that information.

This is great. Thanks for putting in all the work to gather the data and approximate the function. It’ll be interesting to play with this in mind now. Makes sense why tactics like Wu Kong are so effective.

It’s almost that.
Attack is Attack-Stat of the attacker with all the bonuses, penalties and combos
Defense is Defense-Stat of the defender with all the bonuses and penalties
±50% is a random coefficient varying from 0.5 to 1.5 and applied to the Attack/Defense ratio
On the other hand, the effects of colors and critical hits are applied after the indicated calculation.
For the cases studied, critical hits only appeared for tiles and in less than 4% of cases.

This information is amazing! Thank you for sharing. It must have been quite a bit of work to put this together :).

Ahh, Thank you for pointing that out.
Again, @SolemnWolf, thank you so much for sharing this information.

EDIT : The examples were taken again following the simplification of the first post

Have you adjusted for crits?

So having heroes with good defense and strong attack would be better ? What about heroes who have high attack power and low defense like Elena ? would it be worth it to fully level her up ? I think she’s the one red 5* who has strong power attack and low defense though if I don’t make mistake !

Exceptional work @SolemnWolf. I look forward to seeing what further conclusions can be drawn.

Very interesting to see that lowering defence is more valuable than raising attack.

I think weak spot on Titan does not always critic… I’m pretty sure!!!

@Paizo101, I do not think my work is a good starting point for choosing heroes.
The tactic is more important. For example, Elena’s special skill is very interesting.
Look at the side of this topic

(Update Note: As of February 21, 2019, various members of the 7d family have taken over maintaining this wonderful sheet Anchor created.) Seven Days Departed Leader, @Anchor, crunches insane amount of data to give us full hero grades for raid offense, defense, and Titans in Empires and Puzzles: http://7ddgaming.com/2018/01/18/anchors-complete-guide-to-hero-grades/ Special thanks to @ScndStar (Who organized and built the whole spreadsheet), @Xero786, @Arien , and @Boarasaurus (Provided mu…