So, just to ask, I get a match 3, another match 3, followed by a match 5, and STILL my heroes of matching color haven’t attained their specials?

(During this the other team has no specials firing off)

Isn’t that enough, even without mana troops (as this is 3* tourney), to get the specials going?

going to need more information, but the first thing that popped into my head is that you probably got hit with a Sorcerer’s Delay that cuts mana gain by 50%.

Possible, except I don’t recall seeing the delay icon.

But this was the team, so… maybe? 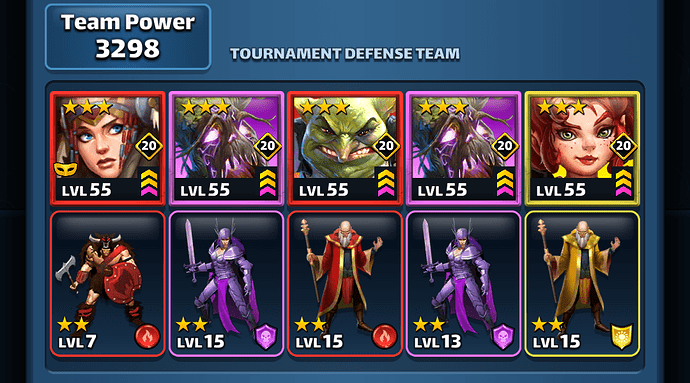 C. Hawkmoon is a Sorcerer, so that was probably what happened.

Very Fast speed without any mana bonuses is 6.5 tiles. if you got hit with Delay, and then you made your matches, you “only” got 11 tiles, so at -50% mana gain, you’d need 13 tiles to get full mana.

Time frame is important. How many turns passed? Delay only lasts two turns, there were three matches, so unless the matches cascaded from one another, there’s little chance delay is the answer. Delay has a max chance of 15% and only affects one, so hitting the same hero twice over three turns is a bit of a slim chance. But, under lab conditions, might have been delay…

That’s what’s confusing to me. The time frame was literally what I reported: I did a match 3, a match 3, and then a match 5. During that time there was no DF special. I never hit Hawkmoon. And yet, no special for my offense.

It made zero sense to me, which is why I asked. It’s like the VF mana is arbitrary in it’s application.

Unfortunatelly, without a video it’s impossible to know what really happened.

True, except they never got a chance to fire off a special. This is at the start of combat, my matches were right off the bat

not against me in the last few weeks!

and only affects one, so hitting the same hero twice over three turns is a bit of a slim chance.

this exact thing has been happening to me at least once a week while raiding, and it’s gotten really annoying in the last few weeks especially. (15% my ***.) usually it’s Krampus, but it’s also been C. Kadilen, Xnolphod, and Vanda.

During that time there was no DF special. I never hit Hawkmoon. And yet, no special for my offense.

my best guess as to what happened, since there’s no video to refer to:

Yeah, that is a problem. I didn’t record the battle, but I wasn’t expecting any issues either. I’m well versed in both winning and losing a fight, take the good with the bad (tile fairies are quite fickle in giving favor). This one just felt really odd

Might be. I’ll just have to record each and every match, just to be sure. Anyway, thanks for the “possibles”, good things to look for in the future

It happened to me 1/5 flags on the first day.

I was puzzled. Look for sorceror.

I didn’t bother to “investigate” further. It happens.