We are a medium alliance(80k points). We are loosing big time our war but we didn’t have a chance from the start. Our alliance have 30 members and only 10 of us have a team power above 3000. Our enemy only 25 players but only 3 with a defense power under 3000. What can we do? We managed to score 2400 points with hard work but anyway we are loosing with a big gap. Please guys change the matchmaking system. Alliance score is a joke and don’t reflect the true. Make the 30 heroes rooster the rule of matchmaking. Only like this you will have a fair matchmaking. If you don’t will start cup dropping because that is the best strategy to win a war. I know is not a nice thing to do but in the same time your rules in matchmaking are so weak and you diserve that. Come on SG start working in the right direction!

We have been lucky and have been evenly matched so far. But i have heard this complaint from many different levels of players and both higher and lower alliances. Something tells me SG is working on it. They have been quick so far to try to resolve every issue with wars as quickly as they can. Just may take a minute to figure out a new system besides score and then the best time to roll it out. We have enjoyed every second of wars. No complaints from my team’s end so far. It has it’s flaws but other than titans, it is probably the most liked feature for us now.

I keep my opinion but I have to write the bad part and what is wrong also. When I find flaws I have to name it that developers can see that. I’m not saying wars are a bad thing, not at all. You hate it, I only want to get better and fair. Your problem was I remember the lack of rewards for certain efort. But I see you remember my name and follow me trough the topics and you get nothing in exchange but you still waste a lot of energy and time to do that

Oh, I got a smile out of it.
That is a very nice reward, to my mind

By the way, do not flatter yourself. I merely check the new topics

You’re funny, see you next time😊

We’ve had 4 wars. We have won 2 and lost 2. They have all been exciting. Alliance Wars seem to be working pretty well, don’t they?

I do think matchmaking is important in Wars.

Does anyone know how the matches are actually made now or are we all assuming?

Did I miss it in Dante’s War Primer? Fifteen days ago, it was asserted to be based on alliance score. If that’s still the case, something’s gotta change.

The same thing is happening to us, it is a match for points but the players are lowering trophies because they do not really compensate the chests, especially from diamond to platinum, and thus they come out easier wars to win. The system does not work, or make modifications in the arenas so that it really hurts a lot to drop the trophies, or change the pairing system to one that can not be manipulated

Throwing a slightly different perspective in;

Our alliance score is in the 103-106k area, and all four of our opponents have been very closely matched with our score at the time of deciding. We have 30 members, including 3 cup dropping players. I keep my own cups at 2100ish for ease of chest filling, which is around 300 less than I probably should maintain. Another, admittedly our strongest player, keeps his around 1800, and the third is currently around 1400 but has been at sea for over two weeks and hasn’t participated in a war yet. That’s roughly 1700 missing from our score that fluctuates around 3000 per week anyway, and if you wanted to be finicky you could say our titan score has took a hit from a couple of extra titan escapes over the past fortnight due to missing a strong member.
The other 27 members all actively maintain their trophies to the highest they can. Three of them are fairly new and can’t yet put a team out over 2500 power, our leader is what you could consider a late game player but maintains a healthy trophy count, the other 23 are all mid-level (3k-3400ish power teams to put it into perspective). We are not a particularly strong alliance that’s living below our means, we’re pretty average.

So far, every time an opponent has been revealed, we’ve looked them up and they’ve all been a lot more balanced than we are; slim differences in trophy counts and defence team power from top to bottom of their rankings, all generally a fair bit higher than ours, and every time we’ve all agreed they look stronger than the alliance we faced before. Sure enough, when the battlefield is then revealed, half of their teams suddenly look even stronger.

But, every war so far has been a landslide, and it’s all down to the same thing; most of us are still able to put out strong teams come the third, fourth, fifth flags whereas our opponents are clearly struggling after two swings each. We watched one of our weakest members take no less than 12 attacks after revival in our third war, and finished it with two heroes standing. I enjoy the gameplay itself, the few minutes per war that I get to actually fight, but overall it’s just tedious now. Each time has been the same, the first couple of hours are mildly interesting then we can just switch off and wait for the victory notification.

It’s early monday morning and I’m not even sure what I’m moaning about, I just know I’m well in favour of aggregated benches to determine opponents.

I already made the suggestion in another post that alliances you can join with 0 trophies will not fight against alliances with any min. trophies to join. Maybe this helps or is a step in the right direction?

Not really, the issue there is that trophy counts are the most easily manipulated. Even in a 0 req alliance, most members still have a healthy amount of trophies anyway, and it’s rare that an alliance with a trophy requirement enforces it to existing members, they can gather enough cups to join then still all drop to 0 if they wanted to force matches with weaker opponents.

Edit: just realised your suggestion of stopping trophy requirements from fighting 0 requirements would get around what I said, but then the minimum trophy alliances could just remove their requirement temporarily to force easier matches.

Well, our alliance has won all four wars so far. We have good players who get a lot of points for our alliance. Which is great.

I personally have accepted the fact that I do not do well in AW. So I just march in, take out the tank, weaken an opponent and let my alliance buddies move in for the kill. After all, the kill bonus is for the alliance, not for me, so why should I not spend my flags softening up opponents for the kill?

I used to find it very annoying that I do quite well in raids but I absolutely suck in AW. But then, I do well with the titan and I do well in raids. And 2 out of 3 ain’t bad. Can’t be good at everything. And fortunately, our alliance is not the kind that demands such perfection.

So, while AW is not my favorite occupation, it’s ok. I do not experience the elation that is so often mentioned. Not at all. But it is nice to see an alliance buddy move in, kill off an opponent that I softened up and grab the kill bonus for our alliance. And that is good enough for me.

Are you using the same team(s) in AW as for your raiding?

I find it very helpfull to so 2xHealers+3xOthers in AW, but in raids it just slows me down.

that is a good idea … let me try that, thank you!

If that works well, I just might level up a few more healers. I have 8 fully leveled healers at the moment, including alberich. Leveled up 4 for these wars, so I could staff all teams…

Have you been watching @Anchor’s videos😆? He suggested the same thing😀

Haha, I reached the same conclusion, @Anchor is a smart dude.

He only shows his intelligence outside the alliance tho!

I come back with a Screenshot from our last matching in war. Again cup dropping… Again I make the same request, forget about alliance score in AW matchmaking! An example from our enemies: 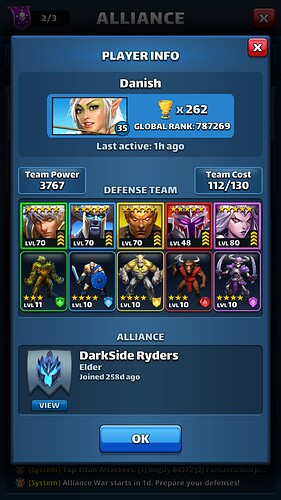