So normally I wouldn’t repost a bug even though nothing has been done to it, however this time I have documented the situation, maybe this will encourage the devs to actually do something. This was the original:

Scenario: I am attacking in war with Cristóbal (4/85, 952 base attack + lvl 23 mana troop). Opposing Xnolphod has 837 health left out of 1675. This is barely less than half (2*837=1674). No buffs or ailments affecting attack/defense are present. I fire Cristóbal at Xnol on 1st charge which should do 500% damage. Xnolphod takes 375 damage, which is ridiculously low based on every other sniper hit I’ve ever seen and can only be explained if the <50% criteria was applied incorrectly and Cristóbal o…

This time it happened during a normal raid. In the first picture I’m showing the current board state, in the second you see Isarnia’s health (and other stats). Just for completeness sake Isarnia had a lvl24 mana troop, my Cristóbal had a lvl26 mana troop. 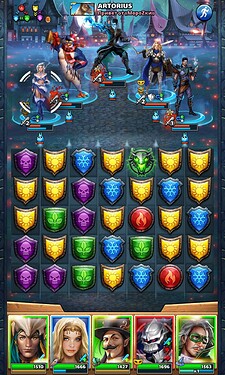 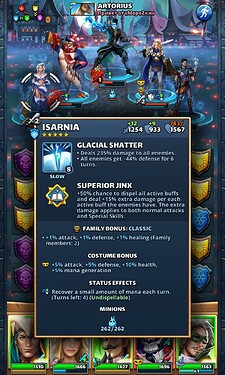 2 * 783 = 1566 which is less than 1567, therefore Cristóbal’s first charge should do 500% damage, the damage should be somewhere in the 800-1000 range depending on rng.
Therefore after Cristóbal fires Isarnia should either be dead or left with some very small health remaining. Instead Cristóbal only did 452 damage (not captured as I don’t have nimble fingers), this is clearly due to incorrect rounding. See board state right after Cristóbal fired in 3rd picture: 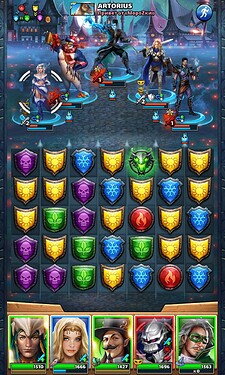 This issue has been around forever, it was fixed in update 35 for heroes like Kageburado, Fenrir, etc, however I assume Cristóbal was released later with same buggy code. See previous related posts here:

Thanks for repIies. I figured someone must have noticed this before. It is most likely related to rounding. It should still be fixed.

@Petri: please let us know what is the best way to report bugs. As I’m sure you can understand it doesn’t feel at all great when we take the time to document issues that your QA people should have gotten before the code goes live and then get ignored time and time again.
I know that you guys read this section of the forum because sometimes you reply to some of the bugs reported but it seems random to which. What is the criteria? What more do we need to do to merit an answer and a fix?

@PlayForFun: maybe you have a insight?

Thx for your screenshot.
Based on what I see on them Christobal should deal 500% damage, which would take out Isarnia for sure.

I am asking Staff to look at this.

Thank you for the report, we’ll investigate this here.

Hmmm, problems with math… Again?
Come on, SG, you can do better. Right @Petri ?